Before Fer137 posted the paper in the comments, this blog post copied some news that the 72-qubit Bristlecone processor was used instead. Note that Sycamore should have 54 qubits but one malfunctioned. 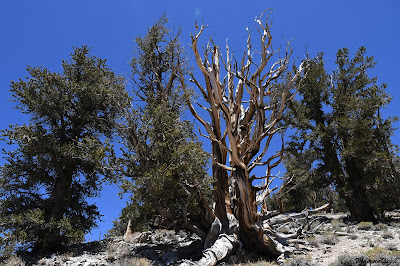 Bristlecone pines are among the oldest living trees on Earth. That's why Steve McIntyre and other people who have done work on the climate reconstructions have used this term many times.

The top teams building usable quantum computers – at Google, IBM, Microsoft, and a few more – have been basically boldly promising quantum supremacy to emerge before the year 2019 ends. Now, a few hours ago, we were intrigued by articles such as


indicating that the promise was just fulfilled. Search a Google News thread.

"Quantum supremacy" is the standardized term for the (wannabe) quantum computer's ability to solve a (any) problem visibly more quickly than the world's fastest classical supercomputers can. For example, if you're a member from a new group of adults who can drink milk as if they were babies, and if your skin is white, some people may call it "white supremacy".

Google's quantum computing chip Bristlecone – that was introduced in March 2018 – has arguably done a calculation that took 3 minutes but it would take 10,000 years on the IBM's Summit, the top classical supercomputer as of today. I know nothing about the details of this calculation. I don't even know what amount of quantum error correction, if any, is used or has to be used for these first demonstrations of quantum supremacy.

(OK, it was the 53-qubit Sycamore, according to the paper by Eleanor Rieffel et al. I won't delete the previous paragraph.)

If you have a qualified guess, let us know – because while I have taught quantum computing (in one or two of the lectures of QM) at Harvard, I don't really have practical experience with the implementation of the paradigm.

If true, and I tend to think it's true even though the claim is remarkable, we are entering the quantum computing epoch. It's clear that the know-how will be unstoppably copied, emulated, improved in many ways, and so on. Better technologies to replace Google's approach may emerge, too. They may be combined, hybridized, and improved further. A brute force and miniaturization etc. will be applied to those branches of progress that have worked, and so on.

We will see a qualitative redefinition of the boundary between the problems that are solvable vs unsolvable by out gadgets in a realistic time. Try to appreciate the breakthrough when a chip of this size may suddenly trump the world's previous most powerful supercomputer in the speed of calculating a problem by a factor of two billion. If you are an anti-quantum zealot, you may perhaps try to understand that the transition from classical to quantum physics really is fundamental and qualitative. Despite this superior speed, Bristlecone's controller consumes 2 milliwatts, approximately 37 gazillion times less than the Bitcoin mining network. [...] OK, imagine that similar pictures of Sycamore are embedded here instead.

Also, this qualitative breakthrough represents a great threat because the passwords and cryptographic codes that much of the security of the modern world depends upon may be threatened soon – although I believe and hope that useful quantum computers that can steal money won't be sold to pickpockets for several more years. If you know something about what actual threats are waiting for a regular user of computer accounts, Internet banking, cryptocurrencies, and similar things, you may try to present the most insightful review of these topics.

I am sort of afraid of this new expected fast evolution – because the main visible purpose of this whole new accelerating industry will be for one quantum computer to trump another (or a classical computer) in computational disciplines where the only practical impact is to be trumping each other in artificially invented tasks. ;-)

You should better be ready and study at least 6 pages of my lecture about quantum computing (OK, they're very crowded pages), so that you know at least as much as some undergraduate students who have gone through the Harvard safe spaces. These six pages discuss qubits, basic operations, Fourier transform, Shor's algorithm (factorization of integers), and Grover's algorithm (database search), among a few other things. Well, I've actually presented another lecture (for grad students?) where I have also used some scanned notes, however, and I don't seem to have them now.

AT&T is working on a communication network connecting quantum computers and Facebook has software that allows the engineers to send messages and children's money, Libra, to each other. All big companies contribute according to their abilities.
Luboš Motl v 6:15 AM
Share