While premium unleaded autistic children and adult psychopaths expect an imminent climatic doomsday, recognize a Jesus who is all around us and has pigtails, and declare zero tolerance for deniers who threaten their children (that guy will also be banned because he denies that people have to avoid having children to save the planet!), the rest of us that hasn't completely lost our minds realizes that – not only because of the cold May and August in Czechia – there is zero chance that anything deserving to be called the climate change will pose any significant risks and old-fashioned events that matter are taking place instead. 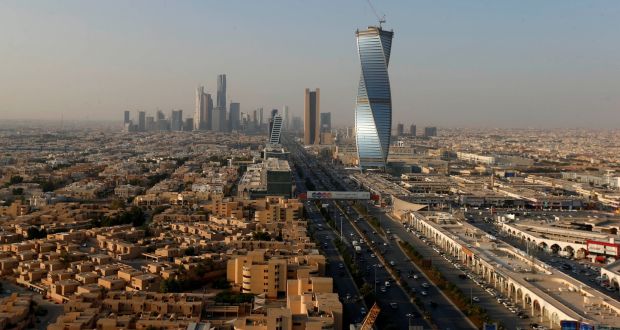 The Saudi engineers miscalculated the chiral tension in the material and one of their skyscrapers, the Majdoul Tower, got twisted.

Some of the events are affecting the explosive Middle East. Days ago, Saudi Arabia lost 1/2 of oil refineries – facilities in which impurities are being removed from the crude material (oil in this case) to get petrol or diesel etc. It's a big deal because, you know, oil products are rather important for Saudi Arabia. Saudi Arabia has 33 million people, a 50% higher GDP per capita than Czechia (true both for nominal and PPP), currency "riyal" that is pegged at "3.75 riyals per USD", and the same huge but not infinite Forex reserves per capita as Czechia to support such a peg.

It is estimated to take 6 months for Saudi Arabia to rebuild this refinery capacity. Meanwhile, the oil price jumped 10% right away. I expect the price to go a bit higher. If the drones that decimated the Saudi Arabia were sent by a schoolkid who fights against fossil fuels, this schoolkid has already reduced mankind's thirst for fossil fuels as 100,000 Gretas – but he doesn't get any credit! ;-)

Alternatively, some Yemeni fighters who were treated badly by Saudi Arabia have already taken credit for that bombardment of refineries from drones – but most experts in this business don't believe them. Iran officially says that these Yemeni fighters must be right and it was a fair punishment of Saudi Arabia for its terror against these Yemeni guys – but nobody believes Iran. So other experts generally say that Iran has to be blamed but I am not sure whether we should believe these experts – not just their competence but their honesty. And if I had some good reasons to claim that the culprit is XY, many readers wouldn't believe me, and so on. ;-)

Even if some drones were going through Iran, it could have been an operation done by someone else. The following is a random list of countries, not a list of accusations: the U.S., Russia or any other competing country selling oil or oil products, and more.

I think that some tensions, destruction, or at least fear will go up and I believe that the price increase by 10% isn't enough to adequately reflect the severity of the situation. Donald Trump claims that his folks have persuaded him that there's enough evidence that Iran should be blamed but he wisely wants to calm down and avoid an immediate war. You know, Iran has over 80 million people – the same territory as Saudi Arabia but many more people – and aside from other things, it's been doing some rather successful research in applied nuclear physics, to put it mildly.

We may face a Third World War and perhaps some global destruction – I don't really believe it could be close to any kind of extinction – but we may also suffer intermediate skirmishes. For example, refineries in many other countries may be bombed. The drone attacks look so easy. Those climate warriors who actually want to reduce the consumption of fossil fuels may start to send their own drones (most climate "activists" won't do that because they don't give a damn about fossil fuels – they just want to poison, cripple, enslave, and control the Western societies). Oil countries, you should better build your future refineries under the ground! That's my $64 billion recommendation to you which I give away for free. You should shoot down all drones in some vicinity of similar facilities, too.

If gasoline and diesel fuels were much less available because e.g. 80% of their production globally would be bombed by drones, well, then it could mean that close to 80% of fossil-fuel-driven cars would be on their path to be replaced by some other kinds of transportation.

Off topic: In the capital of North Korea where Trump was just invited by his friend Kim III (Trump would be impressed by the amazing construction boom over there), the main means of transportation are Czechoslovak "Tatra" trams. Some of the photographs show grateful and impressed Koreans waiting for the overcrowded streetcars that we know so well. See Wikipedia to check that the red-white model T6B5 – extremely familiar look from Czech cities – and KT8D5K – the first K stands for "kloub" i.e. "hinge/joint" that connect 2+ carts – are still dominating the numbers. (Pyongyang also has many Czech trolley buses and buses Karosa, see the pages of the Society of the Czech-Northkorean Eternal Friendship Pektusan LOL – streets of Pyongyang really look like Prague but mostly Prague of the 1980s.) Here is the complete list of Tatra tram models, originally based on the interwar U.S. presidents' PCC streetcars. Like Czechoslovakia, the Prague-based Tatra tram factory no longer exists and the only viable Czech producer of this public transportation is Pilsen-based Škoda Transportation – bought for $350 million by the richest Czech Mr Petr Kellner a year ago. These new trams [in Czech, we say "tramvaj" from "tramway" in Czenglish], trolley buses, and hybrid buses look sexy but the isolated communist country actually started to produce their new, almost equally sexy, North Korean sexy shaped trams in 2018.

So if Trump goes to Pyongyang, my message: bring a few more Czech trams as a gift to the North Korean people. You will be so touched by their being touched! Two years ago, Prague donated some old T3 trams from the 1980s to Mariupol, Donetsk Region, Ukraine. In Prague, they're the oldest trams that could be presented as "tolerable" on the street but in Mariupol, they're a source of pride and if you click at the hyperlink, you will see why – you will see the old model that T3 has replaced LOL.

OK, that was a long detour. Back to the Middle East. These drones sent by the kid-activist or anyone else may lead to the declining wealth of the Middle East, declining importance of oil in transportation, and other ramifications. It may lead to millions of fatalities or nothing at all. There is quite a wiggle room and the fate isn't predetermined. People, especially the powerful ones, should realize that the future depends on their decisions as well and they should think twice whether some "exciting" plan isn't really terrible, whether they haven't overlooked a likely response to their "intriguing" next steps that could be really unpleasant.
Luboš Motl v 7:54 AM
Share