First, I recommend you an 11-minute-long video about Alice & Wonderland by Amazing Polly (@99freemind on Twitter) about a CIA strategy to psychologically break a person. 2-3 investigators are asking nonsensical questions for several days, pretending that all of them make sense to each other (so the investigated person must be the crazy one), they don't care about the answers, they suppress any correlation between the loudness of the voice and the importance of questions etc.

The inconsistency becomes a torture for the person so he finally does everything they need. (See also Zach Vorhies' commentary on Polly's video.)

This is really what the neo-Marxist media and schools are doing to the whole society. They created a monstrous echo chamber saying nonsense 24 hours a day, pretending that everyone who realizes it's a nonsense is a lunatic or a criminal, and it's especially the "order-seeking half of the population" that has simply been broken. 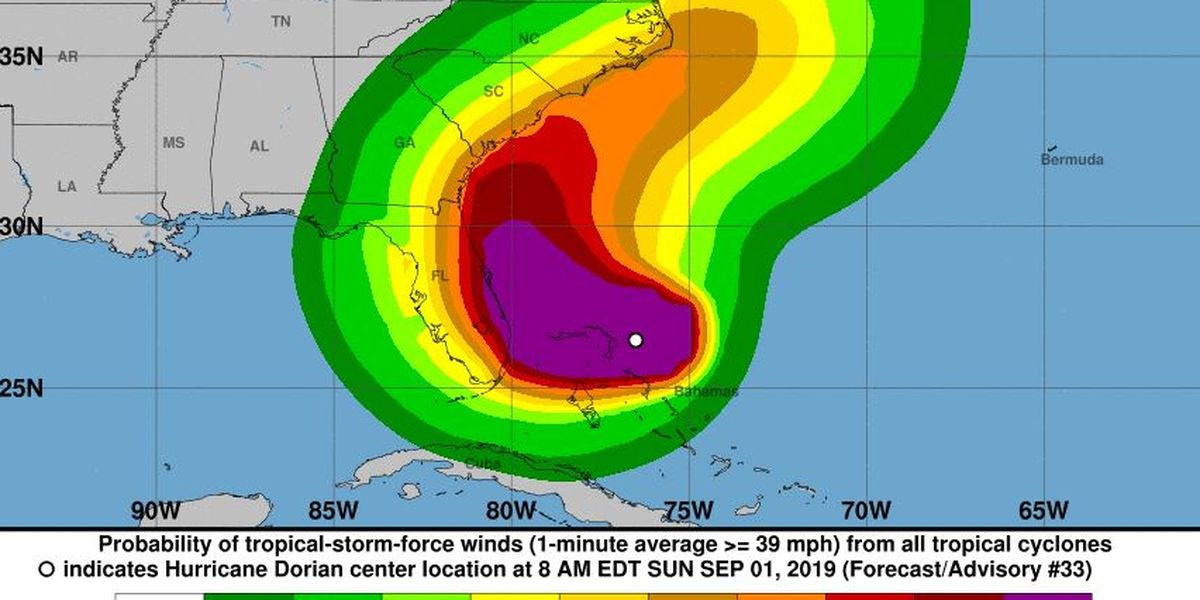 A recent example of an unbelievable fake story was the Trump map depicting the Hurricane Dorian. I did follow the NHC.NOAA.GOV website (National Hurricane Center at the National Oceanic and Atmospheric Administration, U.S.). And the picture above is what I saw at some moment, too. It's the cumulative probability of winds with "over 39 mph per minute in average" ("tropical-storm-force winds") over several days into the future.

Which places were threatened? First, some U.S. geography. Florida (FL) is the peninsula state, OK? On top of that, a block of four other states is sitting between Florida and a shared straight "Northern border". From the left, they are Mississippi (thanks BZ), Alabama, Georgia, and South Carolina (MS,AL,GA,SC). If you continue from South Carolina to the North along the East Coast, you unsurprisingly get North Carolina (NC).

The map above – which I also saw about a week ago – showed a tiny wedge in the Southeast of Alabama that was colored "dark green" – that color means 5-10 percent probability, the lowest band that is meaningfully distinguished from zero. OK, so the tropical storm wouldn't probably make it to Alabama at all – and if Alabama were affected, it would only be the tropical-storm-force winds and over a small part of Alabama. Alabama is pretty far from the East Coast so it's unlikely to get any hurricanes.

But you know what happened. Trump saw the same or equivalent map and he announced that the "hurricane Dorian was going in the direction of Alabama where the damage could be worse than expected". Well, "someone else" expects something else than "what is expected" (by others) – the sentence implicitly says that Trump thinks that he is a better forecaster than NOAA's forecasters which could be dangerous LOL. Needless to say, the sentence is a cute mixture of a true but misinterpreted statement by NOAA and Trump's own (or his advisers?) poor skills in forecasting.

First of all, it was true that the hurricane was "heading in the direction" of Alabama, if you really interpret the statement by the extrapolation of the "immediate velocity vector" denoting the motion of the hurricane eye, for example. That's simply where the velocity was pointing. And Trump simply extrapolated. The hurricane will keep on going there, he implicitly thought, so in a few days, it will be in Alabama and it will still be a strong hurricane. So it's terrible.

It's nice. The problem with this forecast is that it neglects some key facts about the hurricanes and lands. In general, hurricanes don't want to exist above the land – which is why the extrapolation of the motion above the land is bound to be wrong. You may imagine that there's some "friction" in between the winds and the mountains and hills which slows down the hurricane. Imagine that you throw a spinning horizontal wheel on the water. It keeps on spinning there. But once it starts to touch some non-uniformities on a nearby solid surface, the wheel or the hurricane will get repelled, right?

So tropical cyclones are generally "repelled" from the land, too. Even on the map above, you see that the future hurricane path seems to bend to the right (to the North). It was more likely that the velocity of the hurricane would get adjusted to the North and the hurricane would approximately follow the East Coast, like many hurricanes before Dorian did. Alabama is just too far from those Atlantic beaches. Just to be clear: Alabama has been affected by numerous hurricanes but they had to arrive through the Gulf of Mexico (where Alabama has its own beaches), not by crossing Florida. ;-)

If Trump were a really perfect stable genius, he would know at least all of that. But he is an imperfect stable genius which is why he misinterpreted the consequences of the map for the future and issued his personal prophesy about the danger for Alabama, a prophesy that had a chance to trump the NOAA's forecasts by its accuracy but as you might expect, it didn't. Tens of millions of Americans – not the stupidest ones, only those who have the ability to read a weather map – would make a similar conclusion. The storm's eye was going in the direction of Alabama so Alabama was threatened. It's "common sense" – the only problem is that this extrapolation is wrong. 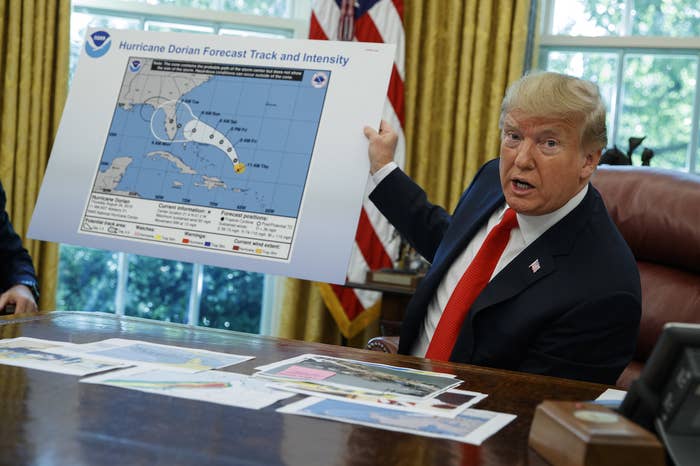 Some days later, he showed the/an NOAA map again and someone added a "black arc" on that map (connected to the pre-existing, legitimate white circle) which reached up to Alabama. Clearly, the black arc doesn't belong there. It just describes Trump's or an adviser's wrong extrapolation – the opinion that the tropical cyclone would keep on moving in the same direction. So one just adds another arc on top of the previous ones and that's where the hurricane gets a bit later. Great and based on the natural ordinary person's perception of the NOAA maps except that it's wrong. Unsurprisingly, NOAA that has produced the maps that made Trump made the conclusion defended its maps and his reaction.

But the story that the "mainstream" i.e. far left media have made out of this innocent imperfect weather prediction by the president is just utterly amazing. Search Google News e.g. for trump fake hurricane or similar words. Helpfully, Google selectively picks the nuttiest articles so we get quite a collection. So all the U.S. readers are being overwhelmed titles such as


and it gets worse if you look at Daily Kos and similar websites of the far left terrorist groups. Holy cow, he just extrapolated an actual map of the hurricane danger in a straight direction, something that most of other people would naturally do as well. And you create a story for a whole week? A new material for impeachment? ;-)

A particularly crazy aspect of this hysteria is the hypocrisy and double standards that the hysteria displays when it comes to the leftists' treatment of risk posed by the atmospheric phenomena. Some climate models – cherry-picked so that they look dangerous (with little attention to the fact that they are already in significant tension with observations) – extrapolate some maximum trends to the future to get many degrees Celsius of warming in a century. Climate fearmongers insist that we must respect the precautionary principle and we should better liquidate the industrial civilization 100 years in advance to increase the chance that we reduce the risk.

Now, Trump – incorrectly but sanely – extrapolates some maps and warns about a grave threat for Alabama that may emerge in a few days and he's treated in this way? Whoever doesn't want to see these shocking double standards – politically motivated double standards – is just an immoral pile of trash in my eyes. Trump's extrapolation of the hurricane's path was naive but it was still far more trustworthy than the extrapolations of the overheated climate models for the next 100 years. These extrapolations depend on lots of analogous naive assumptions as Trump's hurricane extrapolation – and on top of that, they are boldly predicting the weather for one century, not a few days, in advance. In the case of the "global warming", people aren't even allowed to disagree with the panic. But in the case of the hurricane threat, people (including the U.S. president or maybe especially the U.S. president) aren't even allowed to voice their opinion that Alabama is threatened at all? Wow.

Another crazy aspect of these attacks and mockery is that virtually none of the left-wing inkspillers explains what I did about Trump's mistakes and the hurricanes' failing inertia – because they don't really understand it themselves. But they still find it appropriate to mock or even criminalize the president of the world's only superpower.

Trump doesn't have a very good intuition for atmospheric physics (I hope that Will Happer will show him hundreds of paths of previous hurricanes, with some commentary why they looked the way they looked, and perhaps presents some theory of the Coriolis force and other things) but he has all the rights to communicate his worries derived from the NOAA maps. All the far left loons who would like to rob Trump – and everyone else – of these basic rights are far more dangerous than any hurricane in the human history.

Montgomery (capital of Alabama), a well-known song from a country music stronghold, Czechia. Original sound. Not a single man was left of the Southern squadron. Communists have never tried to restrict us a tiny bit while we were singing these pro-Confederate songs. Maybe they were more tolerant than the neo-Marxists, maybe they were too stupid to realize the political meaning.

P.S.: Just in recent days, Trump has faced tons of other attacks for similarly absurd reasons. For example, he published a high-resolution picture of an Iranian missile that failed. That's terrible, he has unmasked something secret etc. In reality, he has only unmasked the fact that America has pretty good technology and you shouldn't mess with the U.S. for that reason. This is surely a positive thing to do – and it's surely a part of his Make America Great Again strategy as I understand it. It's a win-win situation for America if others know that America may monitor missile launches by others. It gives the U.S. a better negotiation power etc. So what is the justification for all the anti-Trump hysteria in this case?

Also, someone decided that Trump wanted to "nuke the hurricanes" – which seems dangerous but might be a good or a bad idea (and it was discussed before). Although Trump denied such plans, some writers wanted to ignite a new hysteria about that, too. Whether Trump actually planned it and whether it's a good or bad idea doesn't seem to be important for them at all. The only important thing is to scream something bad about Trump 24/7. And the list of similar examples goes on and on and on.

P.S. II: Google has finally done something good for the climate science and the public understanding of it. It is promoting a famous blog rigorously proving that the climate fearmongers are liars, the blog of Tony Heller. Tony also has a useful YouTube channel with quantitative analyses of some hot climate questions. Thanks, Google, for helping us to move the climate fearmongers a little bit closer to the state inns.
Luboš Motl v 8:19 AM
Share