Czech PM: expansion of nuclear energy stands above the EU law from our viewpoint

PM Babiš has earned some positive points from me recently – by his at least partly critical attitude to Greta, to some new mass migration proposals, and by his dropping from the 2nd wealthiest Czech citizen to the 4th place (I am a compassionate conservative). But today, he got some new points for nuclear energy.

Ironically, as I have previously mentioned, this year of Gr@tinism – which would produce a lot of support for nuclear energy if there were at least some rationality in this movement – has been accompanied by a new anti-nuclear wave, too. 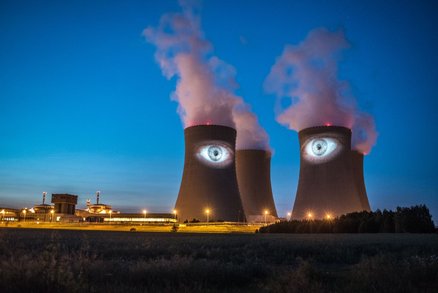 The eyes on Temelín's cooling towers were real (in 2018) and became the largest videomapping in Czechia so far (the Prague Astronomical Clock videomapping was surely much more sophisticated, however). And they were created by Mr Milan Cajs, the drummer of Tata Bojs. Not bad.

Aside from the climate hysteria, we are constantly bombarded by anti-nuclear propaganda, too. A month ago, Reuters hyped a "study" saying that nuclear energy was too slow and too expensive to save the climate. Cool!


Czechs must build nuclear plants even if in breach of EU law, says PM


The breaking of the law would be justified because the expansion of our nuclear energy sources is a more important national interest than some good feelings of some other countries somewhere on the continent that have virtually nothing to do with these decisions.

What is the breaking of the EU law that our suddenly brave PM is proposing? No, it's not carpet bombing of columns of Greenpeace ecoterrorists which might be claimed to be non-kosher according to the EU law. Instead, he is talking about some technical EU-legal complaints by the Austrian Luddites that were recently used against Paks, a nuclear power plant in Hungary: the Austrian Luddites have decided that according to the EU law, the governments aren't allowed to help such projects and Hungary did.

At the end, it was decided that Hungary hadn't violated anything but all governments' nuclear activities could be considered a legal minefield.

Czechia is running two nuclear power plants. Both of them are about 50 km from the Southern, Austrian border. One (top map) is in Bohemia, Temelín, one (bottom map) is in Moravia, Dukovany. Dukovany have been running since 1985, Temelín was launched in 2000. Dukovany has 4 reactors, Temelín has 2 reactors. Dukovany and Temelín produce a bit over 2 GW each (so we have over 4 GW of nuclear energy sources now, about 1/3 of our electricity production – both plants produce about 30 TWh a year because the reactors don't run all the time).

A natural question is: Which of these two power plants should be expanded?

That's where another bold development of recent 24 hours becomes relevant. Industry and trade minister Karel Havlíček has asserted that Czechia should expand both Temelín and Dukovany: cool!

I find it obvious that there will be tensions at the EU level. Rauch from Austria's otherwise right-wing FPÖ has already attacked the Czech nuclear fantasts. According to Rauch's version of the history, nuclear energy belongs to the Middle Ages, its expansion would bring Europe to the Stone Age, and the modern, non-medieval era requires intermittent sources, prayers for the wind to blow and for the Sun to shine, and the mindless worshiping of Prophet Greta, especially among members of right-wing parties such as FPÖ (cannot the Austrian government afford a Krankenhaus for this Gentleman?).

It looks a bit surreal now that this nation of such savages producing similar extraordinary statements about the obsolete vs new technologies could have led us just a century ago.

Let me remind you that Wilhelm Röntgen discovered X-rays in 1895 (his wife, Anna Bertha Ludwig, got the world's first X-ray picture of her hand) and Henri Becquerel saw similar effects spontaneously caused by uranium salts a year later. 1895-1896 isn't considered a part of the Stone Age. The planned reactors belong to the bleeding edge of the 21st century technology.

If these events – and opposite events in Germany which wants to ban nuclear fission and other laws of physics on its territory – indeed take place, we may be seeing a literal transition of the energy sector from Germany to Czechia. It will probably be accompanied by the transfer of many other industries (and productive people?) from the old Western Europe to the new Western Europe.

The expansion of the nuclear power plant has some funding question marks, of course. Babiš generally wants ČEZ, the main power utility whose 60% is owned by the Czech government and a much smaller percentage by your humble correspondent, to fund the construction of the new reactors from its money and loans. As you may imagine, such a huge project might be destabilizing or dangerous for a Czech company. I find it obvious that at least some guarantees will have to exist. It's good news that Babiš won't be afraid of the EU law if that law were trying to prevent the government from giving such guarantees etc.
Luboš Motl v 4:08 PM
Share