Like most other places, Czechia has seen some drier periods and some humid ones. The latest "big flood" took place in 2002. Recent five years were relatively dry. 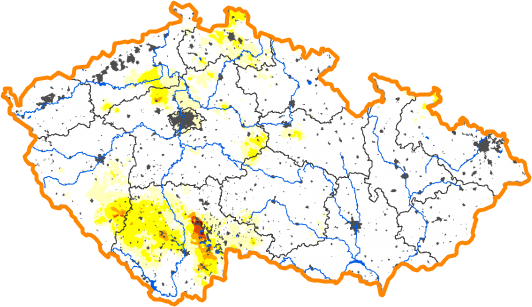 This is what the drought conditions looked like yesterday, on a beautiful sunny Sunday October 13th, according to Intersucho.cz (Interdrought). Almost everything is white – no risk of drought. On that Intersucho.cz website, you may choose Czechia, Slovakia, or Europe; and the interval to play the evolving dry places as an animation.

As some of you know, it's sometimes raining and sometimes it's not. On top of that, Nature doesn't like to fulfill any quotas so there is no condition that we see the exact same amount of precipitation every month (not even every year or every decade). The fluctuations exist and persist at all timescales. If the climate followed some "completely fixed statistical model", then the relative fluctuations would go down dramatically for longer timescales. But that is not how Nature works. The climate itself – the statistical model – has always been naturally changing as well. In other words, the "weather" exists even at timescales that are longer than one year.

Just to be clear, white is no drought, dark crimson is the worse crimson, and the yellow-orange colors are in between.

If you browse the history of the drought patterns on that server, you may find some incredible maps. For example, almost exactly one year ago, on October 21st, 2018, Czechia looked like this: 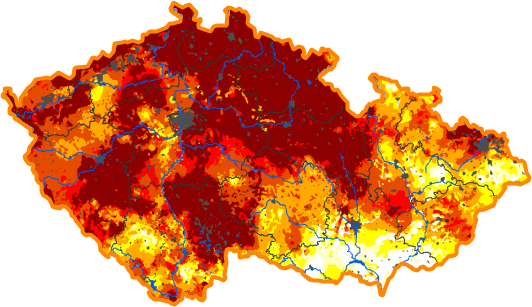 Almost the exact opposite of now. The soil was dry. A similar tragically looking situation was repeated in the second part of April 2019 and since late June through the late July. Whenever there is a deficit (or excess!) of water in the soil, the climate alarmists seem to reproduce as frantically as the bark beetles reproduce in the excess of spruces.

In recent years, we saw the interpretation of the drought which was "caused by climate change" often. For example, one year ago, there was an article titled Climate change is ruining Czechia, meteorologists talk about the second peak drought in the year. Really, was it climate change? Or is the occasional drought – a weather phenomenon – a part of the climate even when the climate is not changing? You know, it surely is. We live in the climate zone where it's sometimes raining and sometimes it's not.

Another article from October 2018 was promising figs in Moravia and the lost treasure of the Inca in Bohemia. The number of similar articles was huge but I don't want to spend hours by looking for all the history. Even in July 2019, a "bioclimatologist" told us that the drought will never leave us again, no previous generation has seen such a fast climate change. The prefix "bio-" indicates that he's trained in some kind of biology so he should exploit the opportunity to shut his mouth because the actual predictions of atmospheric physics aren't something he's capable of understanding let alone doing. You're just a moron, "bioclimatologist" dude, shouldn't it affect your behavior?

The upper layers of the soil are just perfectly fine in Czechia right now – although there's still some visible deficit in the subterranean water reservoirs and in ponds. It is very clear that the risks of an imminent catastrophe related to drought are as remote as they were at any point when "things were fine" in the past. Correspondingly, the amount of news stories about this particular "devastating arm of climate change" called "drought in Czechia" has dropped nearly to zero.

I find it amazing how stupid some people must be to believe that some particular weather conditions – that are obviously temporary (limited in time) as well as local (limited in space) – are caused by the greenhouse gas emissions that increase the concentration of the greenhouse gases persistently and globally. It just doesn't add up. Global causes should have global consequences and persistent causes should have persistent consequences. The October 2018 drought in Czechia was neither global nor persistent so it just isn't caused by CO2 emissions. Period.

Or do they believe that there were no dry years in the past? What about 1947 when Stalin earned lots of political capital by sending the Soviet corn to Czechoslovakia that was crippled by a seemingly unprecedented drought?

Even some people who have college degrees seem to be incredibly easy to be manipulated – and maybe, due to the inflation of the degrees and the brainwashing in colleges, it's especially these people who are easily manipulated today! They probably know that there's some underlying effect, "greenhouse effect" – they have a reasonable justification to believe it although they don't understand the physics in "detail", at the level that they could estimate the effects by a calculation.

However, despite the fact that this climate change is often branded as one of the most important problems of mankind, they just don't ever go beyond these 30-second-long crash courses in the climate issues. If you believe that this is a decisive issue for mankind, shouldn't you spend more than 30 seconds by trying to check and understand the things that various people tell you? Quite generally, an incredibly huge amount of people – dozens of percent – are capable of buying virtually any statement about the aspects of the climate getting worse or even catastrophically bad, and due to CO2 emissions.

Why are you so incredibly stupid, millions of people? It's trivial to see that nothing is getting "worse" about any local weather conditions. One way to see it is just to observe Nature. Another way to see it is to study the mechanisms by which the CO2 should matter. It is totally obvious that the rise of CO2 doesn't cause any detectable changes in the local weather phenomena. It just brings a uniform increase of the temperature by something that seems to be 1.5 °C a century. When the globe is warmed by that much after a century, it is an extremely modest change and on top of that, the differences between two nearby places remain exactly the same (we're neglecting that the warming should be faster near the poles, a statement that is hard to verify because the warming trend is just too low to distinguish it from the local weather-related noise; also, the faster polar warming seems to be OK in North but bad in South). A weather pattern, like a hurricane, is linked to the local temperature differences (and especially similar pressure differences) that are huge, dozens of degrees. Clearly if both places get warmer by 0.15 °C a decade, nothing much changes about the presence or absence of a 15 °C difference between the hypothetical "eye of a hurricane" and its boundary, right?

There are so many other things that mankind could improve if they weren't wasting their money, time, and emotions with similar unscientific nonsense.

Meanwhile, many originators of the "drought in Czechia proves the evil of CO2 emissions" simply know that they're saying rubbish all the time – but many of them have gotten used to make a living out of these lies so they just don't ever want to stop lying. They know that their predictions – which were always troubling – have been proven wrong. Again and again. The July 2019 prediction of the "bioclimatologist" that the drought would never end has already been proven wrong, too. It's always like this. The number of troubling predictions for the next year, 5 years, or 10 years that have been said has been huge. A huge fraction of these predictions has already been decided by the real-world data. None of the things seriously deviating from chance have materialized. And millions of people are still unable to learn the lesson. Even the Jehovah's Witnesses stopped producing the new predictions of the Armageddon.

The climate alarmists and their stupid believers are on par with the simplest Jehovah's Witnesses at times when these witnesses were still really, really stupid.
Luboš Motl v 4:47 PM
Share