When I saw the title Virginia Trimble Has Seen the Stars in the Quanta Magazine, I thought that it was another obnoxious "women in science" piece that have contaminated most of the formerly pro-science media – in which a feminist unsuccessfully tries to selectively promote another feminist as a scientist, while pretending that this activity encourages equality – which is why I ignored it. 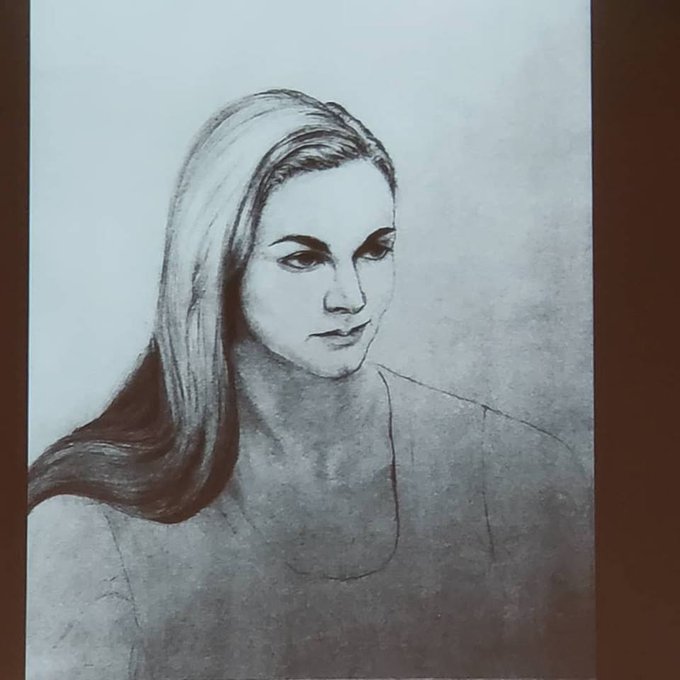 But this interview is something completely different, as I realized when I read it after someone recommended it to me! It is an interview with the prettiest female Caltech astronomer among seven who were there along with Feynman in the 1960s and 1970s. Virginia Trimble has joined faculty in 1971.

So she's an astronomer who has co-written 900 papers (see also Google Scholar), who has read every article in 23 astronomy journal since 1991, who became a chronicler of astronomy for years (although she still operates without a cell phone) as well as Strumia's colleague in "citation analyses", who says that "stars are no longer fashionable", who thinks that the Hubble constant discrepancy will be resolved because the experiments measure "different things" (maybe but my feeling is that she doesn't quite appreciate the depth of the problem – the fact that we don't really have any theory that explains all the data), and who is described as a participant of talks who usually succeeds in igniting discussions – a Feynmanesque trait.

However, it's obvious that her views on the romantic topics are the most interesting part of the interview. When she was a drop-dead gorgeous girl, and not just a charming and witty 75-year-old courageous cancer sufferer (resembling the Hunchback of Notre-Dame) she is now, the Rembrandt wannabe Mr Feynman was running through Caltech corridors and looking for models and she – the Miss Twilight Zone in 1963 (age 18, voted to promote the TV sci-fi show) – was the clear winner.

So he paid her $5.50 an hour (plus physics he was pumping into her during the drawing) which I find very generous. The income was about 9 times lower in 1970 than it is now – so she would get $55 an hour from Feynman today. Not bad.

The picture above is one of the results displayed at Trimblefest a year ago. She seems to have had truly wide shoulders or chest – I think it was Feynman's fantasy, however (compare her to an actual photograph). The ideal woman in Feynman's wet dreams was a babe below the waistline and an excavator above it.

During the visual painting quality hours, Trimble also talked about her science and he sometimes listened.

But in the interview, you can see that two very different worlds were meeting one another. Although the writer, Elizabeth Landau, probably got the task to write something nice about this veteran of astronomy, she didn't resist to include this disgusting paragraph:


And while the #MeToo movement has brought to light many cases of harassment or other forms of sexual misconduct in academia, Trimble’s views surrounding this issue would be seen by many as antiquated as well.


The only thing that the #MeToo movement has brought to light is the staggering dishonesty of many feminists and, as you can see if you read the actual interview, Trimble's views surrounding this issue are seen as wonderful and mainstream by everyone who isn't an annoying unhinged hardcore feminist.

The young interviewer said she wanted to "talk about sexual harassment". Trimble immediately womansplained to her that there's no valid interesting beef in the word "harassment". Instead, these topics are called hanky-panky. So if the interviewer wants to talk about about the issue, they should at least use the correct terminology – namely hanky-panky.

OK, so the young and beautiful Virginia Trimble did participate in tons of hanky-panky and she saw nothing wrong with it. In most cases, it doesn't cause problems to a third party so there's just nothing wrong about it. Exactly.

The feminist wanted to "clarify" so she claimed that the young women are "forced to engage" if they want to protect their careers. Trimble corrected this delusion by pointing out that no one is really "forced" to behave like that. On top of that, it's really the young pretty babes (or at least babes with a shot of estrogen) who have a lot of control over the older men! So the feminists' ideas about "who holds the power" in hanky-panky are upside down, too. Landau has also asked Trimble whether "Feynman treated her collegially". This is the kind of the garbage intimidating jargon that the feminists are spreading everywhere. So Trimble had to fix the SJW's misconception again and pointed out that if she were any good investigative journalist, she would primarily ask what the readers want to know: whether Trimble has had sex with Feynman (who was 25 years older which is just fine). Obviously, inventing this key question was above the mental abilities of Elizabeth Landau's peabrain; she just can't figure out that being this close to Feynman would be cool.

As a guy who thinks different but almost just like Feynman, I must confirm her suggestion that he would have consented. However, in 1972, she married the LIGO Forefather Joseph Weber and they were spouses up to his death in 2000.

Trimble's answer to the question that the interviewer should have asked was "No but not a big deal; it could have very well been a Yes, too". Trimble hasn't been a "strict" bedfellow of Feynman's but she feels to be an honorary one. They were very close. When Feynman was told that he had won the Nobel Prize and he arrived in a suit for the first time, they hugged.

This interview reminded me of a scene in Sexmission (1983), my favorite Polish comedy. Recall that two men, a manly Max and a shy Albert, are frozen in a 3-year-long hibernation experiment. A war (in which a special bomb eradicates all men, at least everyone believes it, and makes the Earth's surface uninhabitable, or at least that's what they are told) makes everyone forget about them so they're unfrozen in a distant future where the people are reduced to a womankind that lives underground in a totalitarian feminist dystopia.

Lots of the mechanisms in that feminist society remind us of the present except that the "horror" depicted in the movie is much less terrifying than what we already see today.

The old women are dying quickly but the oldest one at the moment is Yulia Novack (Polish will have clearly undergone some Czech-inspired and German-inspired spelling reforms). Lamia understands the system rather well so she jams the microphones so that the spies don't hear much. Novack doesn't want to speak but gradually learns that Lamia is different than others, not a hardcore SJW. Novack is secretly growing a potato and hopes to keep it but Lamia beats it – she gives a can of yummy jam to the pensioner which the old lady loves.

OK, what were the men good for? Novack pretends not to remember but then she says that they were good for work etc. "For daily routine activities," Lamia adds, and Novack says "for daily and nightly ones, too". The pensioner gets excited when she is shown video sequences with the naked men – those were good times – and says that if she were in charge with the men, she would restore the normal order of things – which Lamia basically helps to do later (after a scene in which she is collaborating with the rotten system for a while).

The movie ends with a happy end (Max and Albert also decorate thousands of test tubes with their sperm so boys start to be born in the factory). They find out that the global-warming-like hysteria is a fabrication (just like in the world we inhabit), there is no radioactivity on the surface, instead, there is a nice empty house waiting for them – where Her Excellency lives. Her Excellency turns out to be a man, an impotent one, whose mother wanted to save the last boy so she remarketed him as a girl (who joined the Feminist League and unsurprisingly became the leader of the women). They decide to share the house, Max has a cool erotic scene with Lamia (who has 3 doctor degrees but finally learns what to do with the intimate parts) while Albert gets combined with an apparatchik whose task was to catch the three heretics but she is terrified when she learns that the underground TV is constantly lying to the viewers (the TV hosts have announced that the men were successfully transitioned).

The similarities to the reality are obvious but the reality is much gloomier than the dystopia in Sexmission. In particular, Elizabeth Landau is no Lamia. Lamia has always had clear doubts about all the feminist propaganda. Landau is a boring, annoying, full-blown feminist who mindlessly repeats the SJW sentences as if she were a cheap robot. The community of the "science journalists" is no longer capable of producing a single person who would be similar to Lamia. All of those have been eliminated.

Well, Lamia was also hotter – and I think that this fact isn't quite independent from the previous one. One reason why the young Virginia Tremble has engaged in so much hanky-panky was that she was actually hot, unlike most of the contemporary science writers.

The interview was a snapshot of the dying healthy world and Trimble's last recommendation to Landau was the following: Pay attention, someday you'll be the last one who remembers.

P.S.: On Twitter, Trimble encountered overwhelmingly happy reactions. However, there were exceptions from the hardcore SJWs. An evil notorious one instantly tried to question an award that Trimble received. Her comrades added "utterly gross" in the replies. Ryan told someone to "just read this nightmare". Paty exclaimed "Does she know what harassment means?".
Luboš Motl v 6:55 AM
Share