I sincerely hope that tomorrow, on Thursday, Czech PM will prove that he is the "persistent beast" (or "fierce horsefly") he claims to be ("urputné hovado", is that from some movie? I have some deja vu feelings), will steal the childhood from tens of millions of brainwashed spoiled brats, and will present his offer to heavily spank all of them with his own persistent hand. 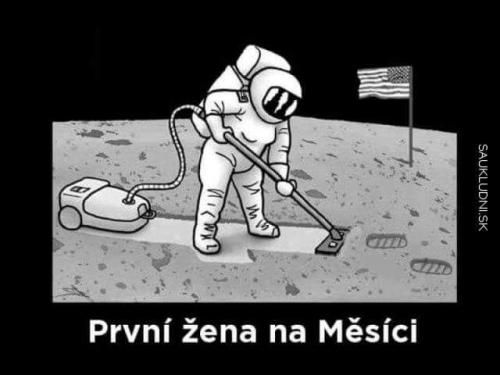 Meanwhile, it's Wednesday and the EU has presented its new gr@tinist plans, see e.g. The Guardian. Ms Uršula Leyen, a "lady" who claims to be the main leader of Europe although no nation has ever chosen her, has claimed that her new wave of unhinged alarmist lies and arbitrary suicidal plans for the continent are equivalent to "putting the man on the Moon". Her modesty is always appreciated.

At least, her European Commission could have placed a woman on the Moon, to beat Americans for the first time. But she forgot about the European women and their vacuum cleaners exactly when it was needed. ;-)

OK, her plan is to make Europe the "first carbon-neutral continent" by 2050. All people and organisms will be switched from carbon to silicon. The required chips and compounds will hopefully be delivered by the European replica of the Silicon Valley.

Aside from the 100% reduction of greenhouse emissions by 2050 – which will require that the survivors will also stop breathing and drinking beer and soda which has CO2 bubbles – she invented another goal, one for 2030. By that year, the EU will need to reduce the emissions by... 65%. She just invented a random number, to make the Europeans believe that she knows some numbers above ten, and to demonstrate the incredible arrogance of power that exists in Brussels these days and almost certainly exceeds what we used to know in the Kremlin 35 years ago. The economic activity as measured by the carbon proxies will decrease by... say 65%, because an unelected apparatchik just liked that number, and the continent must follow that order, right?


Science is telling us we are running out of time. The new European commission is wasting no time.


On the contrary, Mrs Uršula. Science is telling us that any fearmongering about the climate threats in a foreseeable future is pure hogwash. It's the scientifically illiterate spoiled brats, unelected idiotic degenerated politicians, and totally corrupt employees of pseudoscientific institutions pretending to be scientific, and not science, that is sometimes saying that "we are running out of time".

No honest, competent scientist has ever said – or agreed with – the statement that "we are running out of time".

Aside from this expected garbage that makes every decent European deeply ashamed for being European, this "lady" decided to sweeten the plan for those countries that are "still" dependent on coal. The Guardian has named Czechia, Hungary, and Poland (our beloved Slovak brothers and especially sisters have turned into full-blown EU pußies). A €100 billion fund will be created to help these countries to switch to carbon neutrality by 2050. Or to reduce emissions by 65% in just 11 years?

Please, don't be kidding. Poland+Czechia+Hungary have 38+11+10=59 million people. So her €100 billion fund, even if our 3 "Visegrád sans Slovakia" countries fully used it, would mean €1,700 per capita. Is that enough to persuade us to switch? A ludicrous question, indeed.

The number of registered cars per capita is almost exactly 0.5 in Czechia. In Slovakia, the government will subsidize the cheapest electric car on the market, Škoda Citigo-e iV, by €8,000. This is really the minimum subsidy you need for every electric car to become at least feasible as a replacement for cars with ICE engines. Now, we have over 25 million cars in Poland+Czechia+Hungary. 25 million times €8,000 is already €200 billion, twice larger than Leyen's fund, and it's just cars. And maybe that €200 billion should be paid twice or thrice because one electric car won't be enough by 2050.

You need an even larger amount of money to replace our existing reliable power plants by others, especially if the progressive EU folks decide that nuclear energy isn't good enough for them, either – it's not good enough for them because it's good enough objectively and their sick appraisals are simply equal to the reality rotated upside down. Add methane from cows' farts (beef), beer, fermentation, cement, breathing of humans. Because we don't really want the ugly cheapest Citigo and because the last CO2 molecules will be harder, I think that we need to multiply the "minimum car subsidies" by a factor of 10-15.

If you want to persuade Poland+Czechia+Hungary to redirect their economies and lifestyles towards this insane plan of carbon neutrality that we don't really consider sane, you will need at least €2-€3 trillion just for our three nations. Otherwise there is no reasonable proposal to talk about and I surely hope that Babiš won't forget about his commitments and will veto this insanity tomorrow.

Let me articulate an alternative proposal to this €3 trillion fund: a 40-year-long delay for the post-communist countries. Our evolution has been slowed down by at least 40 years of communism so it's fair for us to adopt these anti-carbon policies some 40 years after the European countries that have avoided communism. If she tells us that we will start to listen to Western Europe – or survivors in it, if any – in 2059, I think that the European New Green Deal will be okayed by our politicians.

Without such an exemption or the €2-€3 trillion fund for us (the last molecules of CO2 will be much harder than the first ones!), the departure from the European Union that will really enforce the transition towards the 65% emission cuts by 2030 is obviously a better solution even if it would have to be achieved with the help of the Russian nuclear weapons. I am already preparing a speech to be delivered to Putin where I will beg him to help us. You know, 65% reduction in 11 years is some 6% a year. How do you want to do reduce this CO2 proxy to the economic activity by 6% without a crystal-clear economic depression? It's insane, suicidal, and our nations don't want to be a part of it.

P.S. 1: According to the Czech government materials (market news server, government server), the transition towards carbon neutrality would cost CZK 60,000 (€2,350) per year and per capita (including infants; it's CZK 675 billion annually per Czechia) – and would have to be kept for 20 years. This 20-year-long fee is equivalent to €47,000 per capita or €2.8 trillion for the Visegrád Group, if linearity is assumed. Sounds about right. Is the German public ready to add €2-€3 trillion to the gifts they are sacrificing to the handicapped Swedish prophet?

P.S. 2: Reuters reports that there's a chance that Poland and Hungary will actually veto it along with us, Czechia.
Luboš Motl v 4:51 PM
Share