According to most Czech observers, Czech billionaire prime minister Andrej Babiš – who is worth some $3 billion – is living through a terrible week. (Babiš himself says that he is very happy now – especially because his family will be saved from the legal harassment for the first time in years. Not too many people believe that he's too happy now.) 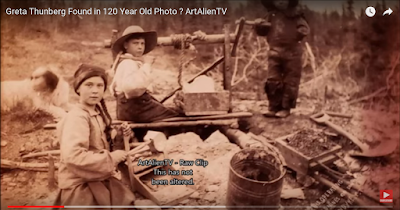 Once a gold-digger, always a gold-digger. An 1898 photograph of the Yukon/Klondike Gold Rush showed a lookalike of Greta's – perhaps because that 19th century girl's mother was a Swede who drank during pregnancy

The final EU audit of his "cohesion funds" subsidies arrived and it says, like the incomplete one, that 100% of the subsidies paid to the Agrofert company ultimately controlled by Babiš were illegal and have to be returned because of the EU and Czech laws on the conflict of interests. It's some $20 million – almost half a billion crowns. Well, they actually found some extra subsidies that shouldn't have been funded for reasons unrelated to the conflicts of interests, including the upgrade of a toasting factory that was claimed to be about some cool scientific and technological progress but it wasn't. ;-)

What's worse is that the "regular agricultural" subsidies (which are higher and comparable to $100 million a year) will probably be treated equally just in a few months. They make about 1/2 of the Agrofert profits (yes, even without subsidies, the whole conglomerate would still be safely profitable – the irony of subsidies is that they're often not needed at all and they just distort the market for the fun of it). To reduce the expected profits by 1/2 means to reduce the equity by 1/2. Because Agrofert has some debt, the relative decrease of his wealth could be more pronounced than to 1/2. Moreover, the banks could and perhaps should harden the required guarantees. On the other hand, they shouldn't be hysterical because if they take over the Agrofert, that company will be immediately worth more again because it will be eligible for subsidies.

On top of that, the top prosecutor Mr Pavel Zeman has restarted the Stork's Nest subsidy fraud investigation – only against Babiš, his top secretary, and his (allegedly psychiatrically unhealthy) son Andrej Babiš Jr (who lives in Geneva), not the rest of family or others – that was suspiciously stopped by a lower prosecutor Mr Šaroch a few months ago. This is the kind of an event that tells me that despite some obvious pro-Babiš "bias" that is manifested at various places, the "government structures still work OK" in Czechia and regular citizens don't need and shouldn't intervene. The statement by Pavel Zeman was concise, balanced, and professional. He emphasized that Babiš remains formally innocent etc., too. That's how things should be. I have a better feeling about this stuff than about what Adam Schiff and comrades are doing in the U.S.

Yes, I think that you should learn from us now, Yankees. Especially the shifty Schiff and similar people should learn. You are supposed to be a fair judge in your job now – not a hardcore manipulative partisan. Is that really so hard?

Babiš is a former communist party member (the membership was surely needed for him to be an important enough communist director of a company that traded with exotic countries etc.) but a rather pragmatic one who has spent much time in the West already as a young communist spoiled brat. And he displayed some capitalist skills to become a billionaire after the communism fell. He's a mixed package but one that may have positive implications in many situations, perhaps especially the situations that the West is increasingly facing these days.

As the owner of food industry, farms, chemical companies, reproductive health hospitals, and more, he is rather "tangible" in his understanding of the economy. He still doesn't use any computers directly. But as a person from business, he's been trained in the planning of millions of tons of coal and steel – and it's a good thing. So we just saw that he plans to promote himself to an unlikely, industry-based anti-gr@tin of the European Union.

Hours ago, the paid section of the maximally mainstream iDNES.cz news outlet (well, which evolved from the Socialist Youth Union daily 30 years ago but it did grow to define the mainstream today – and this Czech mainstream is visibly less PC than e.g. the Czech public TV channel and some other Soros-type sources) published the article


Czech factory owners are terrified by the sharply green EU. Brussels wants to harden its stance on emissions


The sharply green plans are said to threaten the competitiveness of the producers of steel, wall tiles, and other products – those industries may be moved to Asia where they don't allow the hysteria to cripple real factories. It makes some sense that this article is behind the paywall – I guess that the people who "need" to read this stuff simply are naturally rich enough to pay the fees.

Another related article appeared behind the paywall, one in the HN, a financial daily:


Babiš will block the EU war on climate change. He demands money from Brussels


The first sentences say that he has promoted himself to the top European warrior for the nuclear power plants – which might actually be fair – and (on the Czech lower chamber's European committee, on Wednesday) he said that he would block the EU plans to dramatically reduce the greenhouse gas emissions (and a picture with smoke says that he refuses to "turn off" our coal power plants; the updated article has a picture of Babiš and his quote "we won't return to the caves, will we?"). He also said that he can only change his opinion if 1) the EU pays more money to us (not sure whether he meant just Czechia or himself personally LOL), and (not sure whether it's "and" or "or") 2) if and when the European Union adopts more friendly rules to evaluate the nuclear energy industry.

Needless to say, if this attitude is preserved, he has thumbs up from me. In other cases of my pro-Babiš sentiments, I have talked about a "small plus for Babiš". In this case, obviously, I would describe it as "HUGE THUMBS UP" because this is an absolutely vital question. Even the delaying of such plans by 5 years, or reducing the reductions ambitions relatively by 30% would be totally enough for me to forgive all his problematic record involving subsidies – the "more criminal" isolated Stork Nest case as well as the broader "fishy" subsidies that put him in the conflict of interests.

Earlier this week, Babiš already sent a letter to the EU starting "Dear Ursula" where he sketched his dissatisfaction with her economy-crippling plans and his alternative demands; see also Euractiv.

We are really talking about trillions of dollars that a movement of unhinged gr@tins wants to flush to the toilet within a decade or two. This is a lot of money and millions of dollars – but even tens (if not hundreds) of millions of dollars – of messy or debatable subsidies flowing to one important rich guy just can't be compared to the importance of the future of the European Union's economy. None of the choices is perfect, one from the ideal world, but make no mistake about it: I do compare the numbers. I do compare the two evils quantitatively. The money totally matters here (although the climate hysteria destroys many things, not just the money) and even though I think that his subsidies are wrong – and more wrong than other people's subsidies because he has the conflict of interests which does make bad things worse – I will consider the fight against the climate hysteria to be the unquestionable priority here.

More generally, it's possible that this planned "direct conflict" between Babiš and the green EU is related to the audit about his conflict of interests. It is very clear from his words – and from the events – that Babiš is extremely angry about the EU (although he can't quite ventilate this anger as explicitly as his anger about some domestic foes and critics). In recent days, we heard from him that the European Commission didn't have the monopoly on the truth, that it's arrogant for it to interpret the Czech laws, and similar stuff that you expect from full-blown Euroskeptics. Well, when someone sends a report that you must pay either a large amount of money or a huge one, depending on what you count ;-), it may turn you into a full-blown Euroskeptic.

The events make it more likely that Babiš will vigorously fight the EU – Brian Keating of Forbes says just the opposite ("it is unlikely he will do what he says and veto it because he is in the middle of the corruption scandal") because Brian Keating is just clueless.

This talkative and somewhat contrived if not recursive explanation isn't really necessary. The real point is that the European Commission is "physically" in control of this particular cash and because it concluded that Czechia has extracted more than the rules allowed, it will simply subtract the money from the future amounts sent to Czechia, I suppose. We can't really prevent it. Any EU-level court will obviously say that the European Commission is right. So this whole game of Babiš – his denial that this particular subsidy money has been lost – is childish and only low-intelligence voters buy it at that moment (Czechia still has many – but I think that most people actually do understand these things and his supporters just don't "care").

But the general development looks good to me – he has been turned into a more readable Euroskeptic of a sort who will perhaps not be afraid of opposing some truly pathological trends that are becoming fashionable in Brussels (and other Western European cities). I obviously plan to vote for the Tricolor Movement – which is already at 7% according to a latest poll – but it is generally clear that Babiš's support is increasing among some kinds of Euroskeptics these days. And that's surely a more honorable cause of his increasing support than if he simply redistributes more money and buys the votes of the pensioners and similar groups.

Well, I am obviously much more proud about the stellar intellectual debunking of the climate hysteria by ex-president Václav Klaus – who is a brilliant thinker and "Academician" (and who has gradually learn quite some amount of the natural science although it wasn't his field), although an anti-current-consensus one and who makes Babiš look like a primitive farmer in comparison. On the other hand, we do live in the real world and if a primitive farmer manages to stop or at least slow down or postpone the suicidal gr@tin policies within the EU, it will be an important achievement.

A Christmas song by the Czech politicians.
Luboš Motl v 7:05 AM
Share