...including 24 arsonists: State of Fear?

The Australian bushfires look terrible and half a billion animals may have died (including 18 animals from the homo sapiens species). 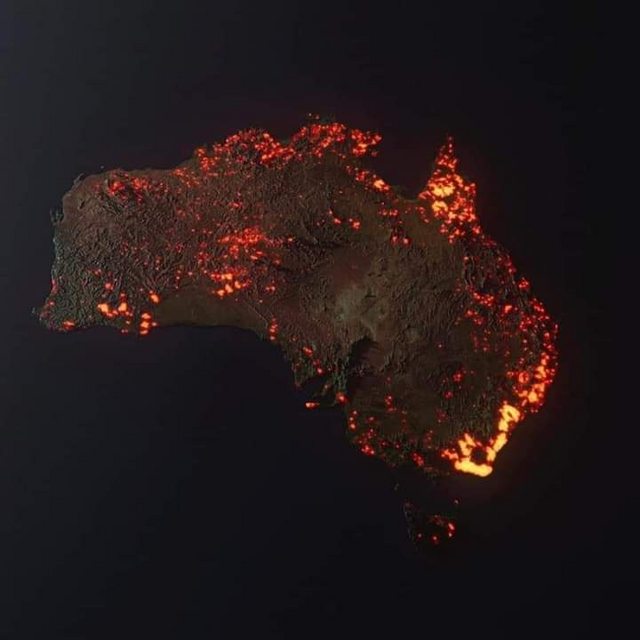 The authenticity of this apparent photograph has been disputed, see the comments.

Some sources say that these are the worst Australian bushfires in the living memory. Jennifer Marohasy disagrees and argues that it has been hotter and fires have burnt larger areas, in January 1889 and Summer 1938-1939, respectively (yes, Australia has a summer when we have the winter).

Meanwhile, the causal relationships are being discussed and abused. Tons of lying psychopaths blame carbon dioxide for the bushfires.

Imagine that you are a brainwashed climate alarmist who tried to reduce her carbon footprint. You succeeded and along with a subset of the 25 million Australians, after all of you sacrificed 20% of things that are fun in the human life, you managed to reduce the CO2 emissions from Australian cars and chimneys by 0.5% relatively to the expectation. But now, some unexpected fires appear and they double the emissions, anyway. A 70% increase in a year. A sane person would feel like a complete idiot – the feeling comes from the brain – and he would adjust his behavior accordingly. Climate alarmists never feel like idiots because, lacking the brain, idiocy is their default state of affairs.

The huge 2019-2020 Australian bushfire season may be classified as a coincidence. But coincidences are often just some events whose detailed causes are too complex or too uninteresting for us to analyze. Causes often exist and they may be interesting and important, too, not just the "probabilistic causes" such as the higher temperatures in Australia right now that increase the probability of spontaneous fires. Some media have told us that 183 people have been arrested for helping the fires to start and spread.

The number of individual outlets that mention this little fact is rather high but this information is still rather esoteric and, as far as I can say, most of the regular people who aren't actively searching for answers to important questions completely miss this news. To say the least, the information about the arsonists etc. gets beaten by the omnipresent idiots' screaming about climate change.

Among those 183 people, 53 didn't comply with the ban on fires and 47 discarded a lighted cigarette or a match.

What's much more interesting are the 24 people who were charged with deliberately lighting bushfires. I guess that the number 24 doesn't have to be final. There may be hundreds or thousands of such people, who knows? I think that there can't be millions of such activists because the information about their existence would have already leaked.

We are sometimes served the detailed CV of the Islamic terrorists which may have been interesting but it is no longer too interesting because they're mostly clones of each other – just some extra bloody Islamic animals. Well, I would be much more interested in the details about the life and beliefs of these 24 people who deliberately started the bushfires.

Police are now working on the premise arson is to blame for much of the devastation caused this bushfire season. A strike force will investigate whether blazes were deliberately lit, and bring those responsible to justice. https://t.co/TWh1KQycs4 @ebatten7 #NSWFires #7NEWS pic.twitter.com/Dul8dMFrZv

The main reason I am interested is the obvious hypothesis that some or all of these deliberate arsonists are actually climate activists who want everyone to believe the catastrophes by causing them. They want to persuade everyone to lower his carbon footprint by doubling Australia's carbon footprint. This man-made alarm was the topic of (late TRF reader) Michael Crichton's 2004 techno-thriller, State of Fear. Note that at some point in late 2004, State of Fear was #1 at Amazon.com.

In the thriller, Peter Evans is a lawyer working for National Environmental Resource Fund (NERF) which is the renamed Natural Resources Defense Council (NRDC). He finds out some suspicious funding in NERF. He and professional investigators discover that the Environmental (real life: Earth) Liberation Front (ELF) is causing artificial "natural" disasters. Well, I guess that a better acronym for ELF in 2020 would be XR, the Extinction Rebellion. The number of psychopaths in XR who are capable of realizing Crichton's prescription is arguably high enough.

In the novel, ELF used a poisonous octopus to kill the deniers who get in their way; and planned a tsunami that should kill thousands in California. Maybe the real world ELF just added huge Australian bushfires to their schedule? If there is such a broader scheme behind the bushfires, I think that climate activism should be globally outlawed and treated on par with the ISIS membership. People who are determined to burn whole continents (the smallest continent is still a continent) in order to deceive a few stupid people about a silly point simply are globally dangerous.
Luboš Motl v 7:26 AM
Share