RT has just informed me that the inhabitants of Fuck-you, a town in Northeastern China, were puzzled by the number of Suns in the sky. Their trustworthy communist schools have taught them that the number should be one but three is what they observed. Who is right: the authoritative schools or their own eyes?

It's hard to compete with the Chinese comrades if they have three Suns instead of our one.

Three "suns" appear on the sky over northeast China☀️☀️☀️

This spectacular view is caused by a natural phenomenon called "sun dog," also known as mock suns or parhelia, as a result of light refraction through ice crystals. https://t.co/N31a8Um6B2 pic.twitter.com/ZbBJLYu8gB

The effect is apparently called a sun dog and the 22° halo is the most widespread subvariety.

When I was preparing to have the best historical score at PhD qualifiers at Rutgers, the calculation of the angles of the rainbow was one of the coolest novelties that I became sure to master. A sun dog is somewhat similar and it results from the refraction through hexagonal ice crystals. 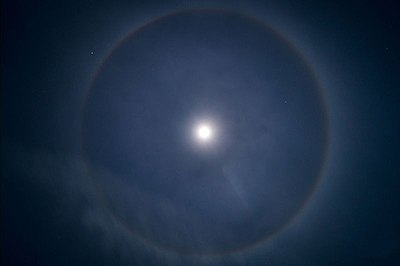 It's rather amazing that hexagonal crystals are flying in the air at all but it seems to be the case. Under normal circumstances, the halo would be a rotationally symmetric ring around the Sun. However, because the ice crystals only exist at nearly horizontal locations, in the air but not too high in the air because the air (and especially ice) density is low there, you only see the left and right doggy ears from the ring.

Etymologists don't know why a sun dog was named a sun dog but I would call it in the same way.

OK, why is the ring located at the 22° angle away from the Sun-you (in Fuck-you, China) axis? It is clear why it's a ring, the situation is rotationally symmetric (and only the ice crystals that happen to change the direction of the photon in the right way, towards your eye, matter in a given direction from you). But why is the angle equal to 22°? Here is the calculation. Start with Snell's law which says\[

\] where the speeds are the light speeds in the same medium \(v_i = c / n_i\) where \(n_i\) is the index of refraction. The angles \(\theta_i\) are measured as the angles away from the axis perpendicular to the plane separating the two mediums. Now, because it's a light refraction and all the relevant light is outside ice, we need at least two refractions affecting each light ray. Because the ice crystals are oriented rather randomly, it's obvious that the direction gets changed by a nearly arbitrary angle.

However, there exist angles at which the angle is rather stable, near the extrema. I am calculating the angle for the first time in my life and I am directly writing the answer for you, in the same way in which Witten writes his papers, so let's hope I will get 22° LOL. (I mean the original, male Witten, not the female one who wants to ban nipples.)

Fine. It seems obvious that the stable angles are obtained when the light moves in the plane that is perpendicular to the axis of the residual translational symmetry of the hexagonal prisms. On top of that, the two refractions have to be symmetric. You achieve that exactly when the purple photon is moving in a parallel way relatively to a side of the hexagon, as on the picture.

When it's so, you may see that both internal angles \(\theta=30^\circ\). You may divide those 180° to three pieces of 60° each, and divide the middle one to twice 30°. For Snell's law, you need to know how much \(\sin 30^\circ\) is. Leonard will tell you "approximately one-half", your humble correspondent or Sheldon will tell you "exactly one-half". This sine will get increased if the photon escapes outside the ice crystal, by the speed ratio i.e. by the index refraction of ice.

Then you calculate how much the angle changed and multiply the result by two because both refractions rotate the direction of the photon in the same direction. The total change of the angle is therefore\[

\] The standardized index of refraction of ice is \(n=1.309\). In Mathematica and radians, the three commands you want are


for the average, extreme red, and extreme violet ends of the visible spectrum. The results are 21.39° for the average and 21.76°-22.14° for the red-to-purple spectrum. Well, the Wikipedia results differ by 0.2° or 0.3° in non-uniform directions but my result has a derivation which makes it superior, doesn't it? The deviation may be explained by different frequencies taken to be red and purple, different range of the visible spectrum, and perhaps some deviation from the extremum because one gets some characteristic thickness near the minimum of the angle 22° which means that the center is half-of-thickness away. Also, the air has \(n=1.0003\) instead of just one.

OK, I think that I passed the Witten test although let us admit that the ice crystal calculation has involved fewer Chern classes than Witten's average paper LOL.

Incidentally, last week, I spent several hours by simulating the shape of the droplet of water. A dripping tap made me calculate how much water I actually waste. One drop per second... how many liters per day it is LOL? The drops have to be rather universal, right? It just happens that sources agree and there is a universal, albeit not too fundamental, constant. The volume of the natural droplet of water is 1/20 millimeter or 1/20,000 of a liter. In one day i.e. 86,400 seconds, you get some 4.3 liters for the one-hertz frequency of droplets. That's cute. Even with the CZK 0.10 per liter new 2020 price of the drink water, it would be still just CZK 0.43 per day (Yankees, it's two pennies a day). You need to leave the dripping tap for many years to justify the investment into new infrastructure! ;-)

But I tried to calculate the universal shape of the water and nothing agreed with the expectations. The equations (probably found by Laplace for the first time) involving the extrinsic curvature of the droplet and the surface tension were so nice. But one funny feature is that the radius of the sphere whose volume is 1/20,000 of a liter is a bit over 2 millimeters. But the fundamental length scale you can calculate from the Earth's gravity, density of water, and the surface tension is something like 7.4 microns. That's \(\sigma/(\rho g)\). The surface tension is \(0.072\) joules per squared meter.

So I remain uncertain what is the effect that enhances the most important scale from 7.4 microns to 2 millimeters. Is it some non-static dynamical effect? Friction in the air? Turbulence? Some exponential profile that violates the naturalness and dimensional analysis? The result should indeed be that droplets much smaller than 2 mm are nearly spherical and the droplets become non-spherical when they are larger than 2 mm or so, and 2 mm is indeed both the transitional size and the natural size describing a dripping tap.

If you know the answers, I am curious. Because the beloved non-spherical shape of the droplet resembles the aerodynamic shapes, I probably can't neglect the resistance of the air, can I? (And because the friction only exists at nonzero speeds, I can't reduce the calculation to a static one, either.) OK, if that is the case, I will probably leave the calculation to you. A proper theoretical physicist prefers to live in the vacuum. Well, in one of the 10500 hospitable vacua outside the swampland. :-)
Luboš Motl v 4:25 PM
Share