Today, we celebrate the 500th anniversary of the birth of the dollar. Well, it was pronounced and spelled "tolar" back in 1520 but the "dollar" is clearly a result of the evolution of that word. And yes, the dollar was born in a Czech town where 3,500 people live right now, Jáchymov.

The same town is also the source of uraninite that has allowed Marie Sklodowska to discover radium and therefore radioactivity. In 1898, she along with a French assistant and the first major sex toy Pierre Curie discovered radioactivity in that ore; in 1910, she isolated radium (along with polonium) inside these rocks.

The BBC published a fun story, Welcome To Jáchymov, the Czech Town That Invented the Dollar. Cutely enough, we learn that no one in the town accepts the dollars today – only crowns, euros, and perhaps roubles seem to be OK – and they haven't seen an American for 3 years. This town which is really the "Mother of All Federal Reserves" should be a tourist magnet for the Yankees on steroids but it isn't.

Jáchymov is a tiny town in the Carlsbad Region, one of the poorest ones, but there are so many interesting and important things over there. Aside from the cradle of tolar, the local mines include radioactive elements that were employed by Marie Sklodowska to discover radioactivity. Nearby ores (note that the adjacent mountains are called the Ore Mountains) in Cínovec (Tin Town) contain Europe's largest deposits of lithium.

There are also numerous ski resorts with ski lifts in the region. The adjacent village of God's Gift (Boží dar) is the Czech North Pole where children may send postcards enumerating the gifts that they demand from Baby Jesus. Headquarters of a regional Santa Claus; the dollar; and the radioactivity – that is not such a bad track record for a poor town of 3,500 people plus the adjacent village.

Jáchymov was founded in early 16th century in the context of the silver mining (haven't I mentioned silver as another elements, aside from all the lithium and radioactive crap?). The name "Jáchymov" boils down to Jáchym, the Czech name of (Saint) Joachim, the only grandfather of Jesus Christ (recall that Jesus' father was handicapped because He had no father). The ending -ov is a masculine noun ending to produce derived geographic names (of towns and villages).

Similarly, the German name of the town – which was important enough because this has been a Sudetenland town with many Germans for a long time – is Sankt Joachimsthal, i.e. Saint Joachim Valley. It's the German word "Thal" for a valley that created the German name "Thaler" for the coins. However, the Bohemization of the word, "tolar", actually became more important and directly led to the name "dollar" of the currencies of 30 countries.

Aside from Austria, Germany, and then Prussia, the currency "tolar" spelled with a "t" was used in Slovenia between October 1991 and the end of 2006 when they embraced the Euro.

At any rate, the equivalent coins have been minted since 1486 in Tirol but they weren't named Thaler up to 1520 when the Bohemian Town started to mint their thalers. At that time, the Tirol-based golden groshes were retroactively renamed to thalers as well. The Jáchymov tolars were minted by the mid-tier noble family of Šliks/Schliks (although the proper German name was "zu Bassano und Weißkirchen") who got rich by silver mining. 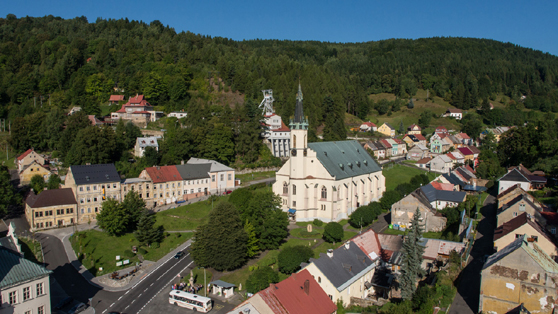 Schliks used to export the silver to Nuremberg, Bavaria, but they figured out that they could achieve a higher added value by minting silver coins (yes, the first tolars were made of silver). The Bohemian Diet (Český zemský sněm) – a parliament composed of pretty noble representatives (which also had some powers that belong to the Czech National Bank now LOL) – gave them the permission to mint the tolars on January 9th, 1520.

It's pretty interesting that even the first coins that are timestamped 1520 carry the portrait of "Ferdinand I" as the king. He was the first Czech king from the House of Hapsburg – the family defining Austria that controlled Central Europe up to 1918 – but he only became the king of Bohemia in 1526. His predecessor who ruled Bohemia in 1516-1526 was Louis II of Hungary who came, as the English name utterly fails to convey, from the Polish dynasty of Jagiellons.

If you have an explanation why some coins have both the date 1520 and "Ferdinand I" as the king, I am interested in it.
Luboš Motl v 8:44 AM
Share