Climatology has become one of the most typical examples of a politicized discipline in which the legitimate researchers have been largely bullied and/or replaced by hardcore activists who want to impose an ideologically motivated pseudoscientific misconception that "there is a problem with the climate" on everybody, including the most revered scientists, and prevent everybody from saying anything else about the climate.

Everyone who hasn't mentally lived in another galaxy realizes that most statements in this discipline are untrustworthy and likely to be corrupt in 2020. 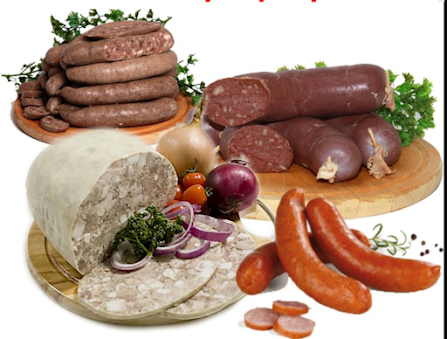 Generous Czechs have contributed to the collection of food to welcome the refugees from the Middle East. I have embedded the image because I hope that it will reduce the number of readers whom I consider undesirable as readers of this text.

However, activists have intervened into many other fields. Even the hardest scientific discipline, fundamental physics, has been under attack by the activists who would ban string theory, supersymmetry, and maybe even experimental particle physics exploiting the accelerators if they were just a little bit more similar and confusable with the great physicists in that field.

But here I want to mention the events in a traditionally softer discipline, the health science. Thanks to Willie for the links. Do activists influence that discipline? You bet. What kind of interests are at the top of their agenda these days?

Yes, a healthy diet is still important and... it's the ultimate fad to fight against meat these days. You know, people should become vegetarians or vegans. Meat is evil. These lifestyle choices have been linked to the extreme left-wing movements for decades (and were largely motivated by animal rights, a branch of identity politics). In recent years, the focus on the "greenhouse gas emissions" from cows has added another brick to many left-wing activists' fanatical hatred towards meat.

Canadian self-made expert on science and society, Ms Donna Laframboise, wrote two recent texts about some highly disturbing events that indicate that the basic academic freedoms and the integrity of research are seriously threatened in the research of the impacts of meat on the human health:


The disappointing or shocking story was pubished in JAMA, the Journal of the American Medical Association. The real events were occurring elsewhere, in the prominent Annals of Internal Medicine. The journal published some nutritional recommendation. Because 11-to-3 experts in a committee voted that there was no clear evidence in their chosen body of relevant papers that red meat harmed one's health, they wrote this "we don't know" conclusion as a part of the nutritional recommendation.

When the publication was getting prepared, hell began. Editor-in-chief got some 2,000 vitriolic e-mails during just 30 minutes. ;-) It's probably not a coincidence when 2,000 mails arrive to the same otherwise obscure mailbox in 30 minutes, right? There has to be an organization behind it – or a conspiracy, if you wish. And indeed, there are about two. There are activists. The True Health Initiative started it but the holy war was brought to a new level by Physicians Committee for Responsible Medicine.

Jiří Šlitr, "Imagine What I Had to Eat for Lunch Today", 1965, video. Dumplings with sauerkraut. In each stanza, one course is being added. Well, the final 6th stanza actually has 19 courses, such a nice lunch had to end with a burp and Šlitr was lucky.

The latter activists weren't satisfied with their obnoxious spam so they also demanded that FTC, the president of Harvard, and a Philadelphia district attorney act. They pretty much literally brought the scientific research to the criminal world. Predictably, the agnostic paper was also accused by being influenced by the evil capitalist industry.

It's the ultimate blasphemy to write anything different than "very negative stuff" about meat anywhere (because God the Vegan is above all scientists and they must submit to Her), the activists insisted, and they demanded a harsh punishment for the culprits. You know, when a troll demands something that is clearly crazy, you may smile and ignore the activity. But when you have an organization of 175,000 trolls (including 12,000 people employed by physicians although "activists" is probably still a better description for most of them – they're surely not representative of the research and researchers), you may very well be forced to react differently. It's a whole movement of fanatical dishonest bullies who have no respect towards the basic principles of the scientific process.

Laframboise's second article lists some of the people who are behind this scary movement. Prestigious schools are involved, too. If you click at the name of a man from Yale, you will see that like Jesus Christ, he is "more than a carpenter" (I had to read that book because of my evangelical ex-GF LOL). He is also an inventor, skier, creative writer, philosopher, health promoter, diplomat, and journalist. Excellent.

Amarouns, the universal food in 2484 AD, according to "The Visitors", Czechoslovak sci-fi series for kids.

Even more prominently, many people from the Harvard T.H. Chan School of Public Health are involved in the "very assertive" – if we avoid the adjective "terrorist" – organization that fights against meat (and against authors of papers that "fail" to conclude that meat is surely evil). It happens to be the same school which also harbored a lady who became famous or notorious with her ludicrous assertion that coconut oil was a pure poison in Summer 2018. Something seems to be rotten at that school.

Science is a precious process that sometimes works, sometimes it's messy. Soft disciplines such as the health science won't ever be as persuasive and solid as physics. But it still makes sense for scientists to do research. However, it only makes sense if it is the real research done by people who have both the integrity and freedom to ask questions and to answer them. When they're under the pressure from 175,000 prejudiced, assertive bullies, it just cannot work as a science anymore.

I think that it's extremely bad that the number of people who really care about similar examples of terror against honest researchers and their intellectual freedoms is so low. Science – real science – is much more important for the society and even the well-being of its average members than they think. That's why millions of people should try to defend scientists against similar selective pressures that are all about prejudices, brute force, and trolling – not about honest scientific research and the evidence that the research actually uncovers.