Shareholders who also buy products: why Tesla is pathological

When I was writing this sentence, the Tesla stock was traded around $640 a stock which is more than 50% higher than the – previously miraculous – level of $420 mentioned in a deceitful tweet of Elon Musk's. The stock price has clearly lost any connection with the reality – but that has been true for some time. The shortsellers are completely right about the essence but they have lost an incredible amount of money in recent months and because this game has been rigged (because those dishonest "investors" who want to drive the price away from the fair price have outnumbered those who are seeking the right price), they may keep on losing if they keep on playing. 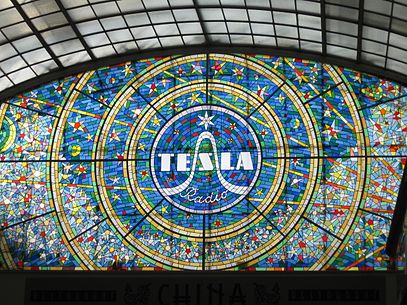 Tesla reported that by some counting, it achieved the first annual profit of just $36 million in 2019. According to a more reasonable counting, Tesla achieved a $862 million loss for the shareholders in 2019.

But even if you assume that the $36 million profit is the right way to summarize the year, the car industry's standard 6-to-1 ratio should mean that the capitalization of Tesla is estimated as $200 million. The capitalization indicated by the current stock price is around $115 billion (note the "b", it is not due to a running nose). The Tesla stock is overpriced by a factor of 500. I mean five hundred.

When a number that should be "about one" goes to 500, it can probably go to one million, too. The "principle of naturalness" has failed rather clearly and it may fail even more than before. There is no very good reason to assume that the price cannot double from this level. It is a number that is detached from all fundamentals and from all sanity. It may be closer to infinity than to any sane number.

There is no reason to think that Tesla will start to produce significant profits in "tens of billions" that would justify the current capitalization. It had no resources to do research. It has made very little technological progress. The new factories were built out of debt.

A particularly shocking detail about the new factory revolves around a planned Gigafactory near Berlin. These people plan to destroy a forest which is home to an endangered species of bats, among other things.

Tesla is a product of the environmental fanaticism that has come full circle by now. In the name of the environment, these lunatics are cutting whole forests. As far as I can say, those who plan it deserve the capital punishment just for the plans.

The result will be another plant for obsolete cars that no one really wants and that produce no profit. In this Norwegian statistical page, you may see that only 186 Tesla cars were sold in Norway in January 2020, basically matching the very number from January 2019. The difference is that now, these are the very cheap Tesla Models 3 while one year earlier, it was the last month when no Models 3 were sold in Norway yet so those were expensive Models S and X. So the revenue in Norway has decreased rapidly. It's almost certainly decreased in the U.S. as well because Tesla no longer gets any subsidies – originally $7,500 which was halved twice and now set to zero.

Ivan Mládek, I Love the Kompyooter, 1980. "I am that Ms Hole Puncher from the Machine Calculational Station. I came to hate men, now I am only keen on Tesla computers. In fact, I fell in love with one. I'll pick up that computer and I will join the community of ladies. He has a good character, all five P virtues. I am only sorry that he is calculating."

The incredible misevaluation of the Tesla price and the astronomical misallocation of the capital isn't just some random error that accidentally affected one company. It is a manifestation of a pathological, anti-meritocratic movement that keeps on growing in the U.S. and most other Western countries. Tesla is a religious sect overlapping with the climate alarmist sect and similar entities.

Here is a typical comment whose basic essence has been communicated to me by dozens of Tesla cultists – this one is from a Twitter follower of mine who brags (in his profile) that he lives in "People's Republic of Massachusetts", clearly a hardcore commie:


I am an analytical person. I bought the stock last year when it was low when I realized that pragmatically “Captain, she’s gonna blow!” My “free” tesla arrives in April


Good for him. He has clearly benefited from being a brain-dead sheep (a more accurate term than an "analytical person") that was owning the stock in the growing stage when it was already insanely overpriced but when the number of greater fools was growing exponentially – a stage that may continue for a shorter or longer while. His Tesla was clearly funded by the greater fools who kept on arriving and were buying the Tesla stock at any price, much like the Bitcoin a few years ago. The fundamental value of the company is such a negligible fraction of the capitalization of Tesla at this moment that we may say that the Tesla and Bitcoin bubbles are fundamentally isomorphic.

If you have had some discussions about Tesla, you must have heard similar things. These people brag, it's understandable. But if you think about it, it is extremely, astronomically sick. What is sick is that


the shareholders of Tesla are very often the same people as the buyers of the Tesla products.


Why is it sick? It is sick because in proper capitalism, the buyers of products and the sellers of the products (ultimately the shareholders) are very different groups – groups that have "opposite" interests and that's why they are making the transactions with each other. Someone sells the cars and wants others to buy many more cars than what he could own; someone buys cars and isn't really interested in buying the stocks because he would become a seller of the cars which is something else than what he wants to be.

But in the case of Tesla, the Tesla products' fans are almost the same group as the Tesla stock's fans. In effect, they own all the stocks (and bonds) and cars together, as some kind of a communist entity that no longer trades in a genuine way. That's why the prices aren't very important. Members of the community don't even know whether they want the price of the cars to go up or down so there are no pressures linked to the "optimization of the system" that would drive the prices towards the optimal values. It is a structurally communist entity that is dependent on the funding from outside – either from subsidies or from the new capital that basically arrives from newly converted members of the religious cult of drivers-shareholders (the greater fools who are driving the price to infinity).

As far as I know, Tesla is the only company where this phenomenon became a "thing" but in principle, such a thing could spread to other industries, too. The relationship between reality and the stock price has been completely cut in the case of Tesla but it could be cut in most of the publicly traded companies – when most of the wealth in the stocks is owned by the people who aren't shocked by the Tesla's pathologies. If that ever becomes the case, and with the current brainwashed communist youth, it may be just a decade or two away, then capitalism as we have known it will clearly be over. The allocation of capital will be decided by stupid fads and propaganda, often ideologically driven propaganda, not by the actual consumers' desires and companies' ability to make a profit.

Steven S. is telling me that "Tesla will succumb to gravity at some point but the timing is tricky". Right, it is tricky, indeed. Even the existence of the proof that the lifetime of this anomaly is finite seems tricky. In the past, all similar frauds and bubbles ultimately ended. But if our markets and societies are undergoing a real paradigm shift towards completely different rules of the game, the assumption of finiteness of the lifetime of this farce may very well break down.

The bulk of the potential investors may decide that it is no longer satisfied with the modest profits of companies that work hard to be profitable – and they want to join the new wonderful world led by fraudulent religious leaders who don't produce any substantial profit but whose power and wealth exponentially increases because they are heads of an exponentially growing pandemics that gradually destroys, devours, or replaces everything that has any tangible value in the old-fashioned sense. When the culture of "bubble growers" sufficiently spreads, all investors who are worth anything will be robbed, marginalized, and made irrelevant. After the civilization of the "bubble growers" inevitably collapses, the return to decent conditions will be at least as hard as the reconstruction of capitalism after the "conventional" communism.
Luboš Motl v 4:09 PM
Share