Donald Trump not only decided to make America great again – and he has already completed over 3/8 of that job ;-) – but he also wants to improve the world in general. One old problem is the Israeli-Palestinian one. 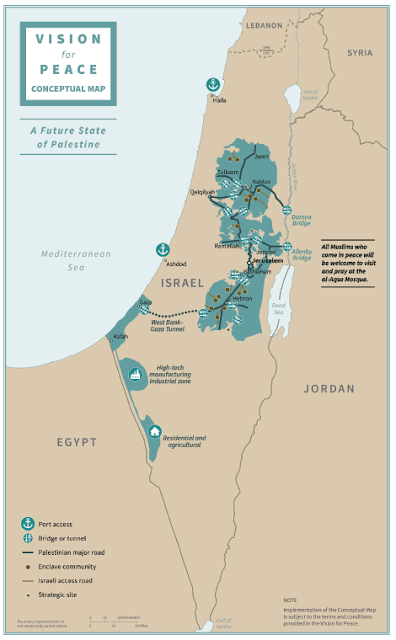 Well, Donald Trump has a solution, a two-state solution. It's not new but Trump has added some gadgets, cute illustrations showing to his Palestinian friends what various new regions of Palestine may be used for, how they're connected, and where they would be welcome assuming they are kind.

Needless to say, Trump's creative contribution resembles Sheldon Cooper's plan to create a replica of Jerusalem in Mexico. But Donald Trump has two advantages relatively to Sheldon Cooper: (1) he is real and (2) he is the president of the United States of America.

I think that all readers, Christians, atheists, or otherwise, who have some Christian playfulness appreciate the Ansatz for the plot where Jesus Christ decides to pick some real-world people who are made of flesh and who seem imperfect – here I must immediately issue apologies to the stable genius for the insult but Donald Trump is an example – to turn some wonderful dreams into reality. God may very well pick someone like Donald Trump to fix all these imperfections of the Universe.

The tunnel between West Bank and Gaza is a creative addition, indeed. If Donald Trump is the man who actually proposed this idea as the first one, he has extra positive points from me. Maybe he takes credit for someone else's ideas but it's probably normal when one is the most powerful man on the fifth largest planet of the Solar System. At any rate, the tunnel looks like a good thing because a connected Palestine seems better than a two-component one.

On top of that, I think that the Palestinians have some experience with building tunnels. Most of the time, they are using them to send explosives from A to B, I think, but I think that they could be taught that tunnels could also have more peaceful applications. I wish Donald Trump a lot of good luck with his well-deserved Nobel Peace Prize. Last but not least, I also wish peace to the Israeli and to the Arabs on the territory of Greater Israel (that's about how Jacob Bekenstein – with a yarmulka on his head – wanted me to call them and I happily will).