Happy New Year! Our media tell us that the New Year's Eve celebrations were extraordinarily peaceful in Czechia. Ambulance had to go less frequently than a year ago and than on an average day! Most of the people who needed some help were drunk or participating in brawls. One kid in Prague had its face injured by pyrotechnics.

Pilsen has seen worse non-fireworks events just in recent days: an 11-old-boy fell from the 9th floor in Bory and died in the hospital; an 19-year-old young man was killed by a train in Doubravka.

Welcome 2020. #Prague
Magical city they said, very true.
I usually hate to share any pics but it's a sin not to when it was a lovely experience.
Guess what? It was just a community driven fireworks.
Government sponsored fireworks and real time video mapping is in the evening. pic.twitter.com/iTFFto0MGe

I think that you wouldn't expect such an "extraordinarily peaceful" summary if you were actually watching (and listening to) the battlefront in Prague and many other large enough cities including Pilsen. It was rather explosive and it felt dangerous.

Prague's city hall traditionally organizes no official fireworks on NYE. Instead, the city conquered by the Pirates wants to be modern so tonight, on January 1st, 2020, 6 pm, there will be videomapping all over the place. Only Prague 2, a city part (Vyšehrad, a part of New Town, Vinohrady, Nusle), will organize traditional fireworks above the Nusle Valley, along with The Union of Friends of Fireworks, also at 6 pm.

What seems more important is that the private fireworks are allowed or at least most of the relevant people believe that they are allowed. And that's why Prague but even smaller cities resembled the wartime between 5 pm and 6 am or so. And even Třemošná which has 5,000 people has had this decent show. In the video at the top, you see some conventional fireworks at the Old Town Square which is where you could expect it given the tolerant laws. Rather regular people are holding pyrotechnics in their hand and launch it on the street. The Wenceslaus Square looked a bit more fiery (here you have 34 minutes from the museum.

When you walk around them, you pray that they're not stupid kids, drunk adults, or especially drunk stupid kids. ;-)

2019 - Graduated from Reading, started a Masters at Cardiff. Covered an election, met some top class politicians and journalists as well as making some fantastic friends. 2020 - lets see what you have to offer. Prague fireworks displays - QUALITY #NYE2020 #happynewyear2020 pic.twitter.com/hUkeytivHX

You may search for Prague fireworks in the realtime Twitter sequence or recent YouTube videos. Lots of the foreigners seem really excited (and a bit scared) about those unregulated fireworks. There are some videos. I found the 12-second video above taken by a Cardiff student to be rather representative of the "pyrotechnics prosperity" enjoyed by our capital. A similar 26-seconds-long video unmasking the omnipresence of explosives was shot from the Letná park.

If you want to see a typical cheap shop with tons of these pyrotechnics products, see e.g. this video.

The number of places from which pyrotechnics has been launched was surely many thousands. It would almost certainly be tens of thousands (tens of thousands of pyrotechnically active groups of friends, in a city of 1.2 million) if you watched the show for those 12 hours or so. Someone in your large enough apartment block is almost certain to have organized her or usually his own show.

And pretty much everyone is fine. You know, freedom works. People tend to adapt to the dangerous toys they are playing with. Some recommendations on TV and in the radio seem to be enough. I have repeatedly heard that you should use products with Czech instructions only, that seems like a good idea. Czechia may simply afford to allow private NYE pyrotechnics in the streets. Needless to say, the peaceful outcomes depend on our habits, skills, behavioral patterns, and indeed, demographics. The pyrotechnics looks and sounds like some scenes from the wars and similar gadgets are actually being used to kill the people at less fortunate places of the world.

There are obviously many other "dangerous activities" and "sins" that the Czech nation has learned to survive just fine – and enjoy greatly. Gaming, gambling, drugs, sexual joy of various kinds. And indeed, intense black humor and hardcore vulgarities, too – the freedom of speech is much more respected in practice than in the U.S. and many other countries as of today. In unrefined enough conditions, many of these activities may indeed be extremely harmful for the society. But they don't have to be harmful – always or forever.

When I look at the official 2017-2018 Prague Nusle fireworks, I wonder whether this event brings something that the private fireworks don't. I suspect the answer is No and it may be a good idea to simply privatize this part of the festivities. (But the 1918-2018 fireworks were more grandiose than the amateurish events.) Maybe in a few years, there will be tons of private videomappings as well. 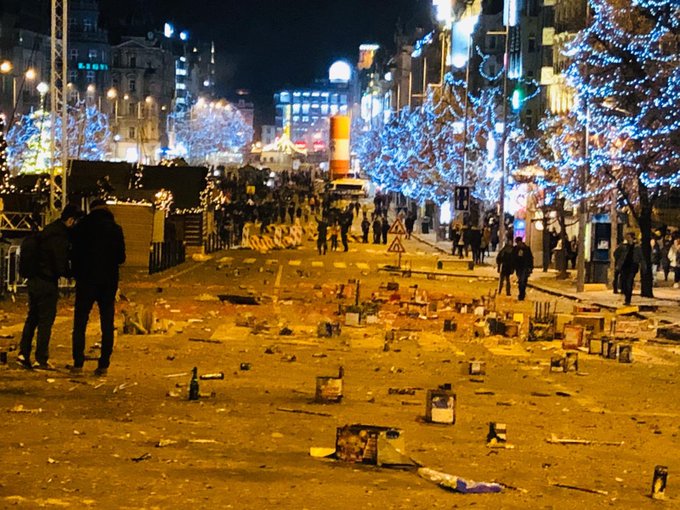