Can holography in the flat space be made manifest? 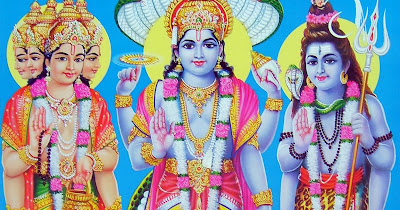 The last hep-th preprint today was written by the colaboration consisting of Brahma, Vishnu, and Shiva:


The Holographic Nature of Null Infinity.


OK, the actual names are Laddha, Prabhu, Raju, and Shivastava but I was pretty close. They courageously claim that you don't need to study anti de Sitter spaces and beyond-QFT effects to establish holography. You may see holography in the flat space and the general relativity quantized in the naive way, too.

They start with some Ashtekarology. Ashtekar didn't just invent the "new variables" beneath loop quantum gravity, an incorrect meme designed to claim that the 4D gravitational field is equivalent to an \(SU(2)\) Yang-Mills field, but also lots of formulae describing the phase space of the classical general theory of relativity. So they review the parameterization of the allowed near-flat metrics that is usable for the null infinity, charges over there, and so on.

Now, they make the claim that the precise microstate is already encoded in the behavior at the boundary. The phrase


...obtained from an infinitesimal neighbourhood of the past boundary of future null infinity...


is talkative and because some objects are null, it is not even easy to count the dimensions. The S-matrix of quantum gravity (and the forced transition from off-shell Green's functions to on-shell scattering amplitudes) may be framed as another manifestation of holography, as my adviser Tom Banks liked to say. But that wouldn't be called holography by Brahma ;-) et al.

Instead, while they deal with the parameterization of the null infinity, they really want to say that you may basically encode all the information in the asymptotic region \(r\gt r_{\rm huge}\) where \(r_{\rm huge}\) is huge at the \(t=0\) slice. It never hurts when you remove another shell and make the region smaller as a set as long as the vicinity of the infinity remains there, they say.

To support this thesis, they use no string theory or other completions of quantum gravity. Instead, they somewhat dangerously claim that these conclusions may be defended by the quantized GR only. In particular, they claim to have a proof rooted in this framework that two microstates may always be distinguished by their behavior in the \(r\gt r_{\rm huge}\) region.

Now, this would differ from quantum field theory. Why is there a difference? Different objects near \(r\approx 0\) may also produce different gravitational fields for a very large \(r\) but they may also produce the same ones. Classically, states of "different types of matter" with the same mass and energy could be indistinguishable from infinity. They agree with this statement but they claim that once you consider the quantum theory, the different types of matter become distinguishable by looking at the correlators with the operator of the Bondi mass. I don't quite understand this argument but I suspect that the correlators are expected to know about the time evolution of the material objects and because those are different, the correlators also feel the difference.

You could say that with a perfect symmetry, there may be different states of matter near \(r=0\) that have the same gravitational field near infinity and the same evolution. But this objection fails for a nice and famous reason: quantum gravity bans perfect global symmetries. Instead, if the symmetry is perfect, it must be a gauge symmetry, and the states related by this symmetry must be considered not just as equivalent but equal as states. I think that they don't discuss the absence of perfect global symmetries in quantum gravity but the positive link between something I believe, namely the absence of global symmetries, and something that I find very suspicious, namely the claim that holography may be established at the level of Ashtekar, may be a positive argument in favor of the suspicious claim.

The paper is courageous but I still feel that it might be very naive and heavily underestimating the subtleties of quantum gravity. For example, they claim to demonstrate that different states produce different correlators with their sensitive operators. For this check to be possible, they must know what the states of the quantum gravity is and how you determine whether two of them are different. They think it's trivial and encoded in some GR quantized in an old-fashioned, field-theoretical way. I don't really believe it. There are lots of modifications of the GR that are made by the actual quantum gravity. For example, entangled pairs of black holes are physically equivalent to wormholes (ER=EPR). Those should still be indistinguishable because they're the same, right? How is their proof basically claiming that "everything is distinguishable with their operators" compatible with this assertion?

On the other hand, more generally, I do believe that lots of quantum gravity insights are waiting to be made within the local formalism of general relativity. I just think that the right statements will be much more driven by string theory and related insights indicating that the naively quantized GR intuition is wrong, after all. This likable proposal seems to return too far to the depths of the 20th century.

At any rate, if the paper or at least its major claims are right, one would be forced to reform many answers to many questions. For example, the Page curve (with the growing entanglement entropy which then decreases) would be abolished and replaced by a constant, near-maximal entanglement entropy at all times. All the sub-maximal values of entropy would be an artifact of the – according to them, incorrect – assertion that you may consider regions of the spacetime independent, as in locality.

The statements about the von Neumann entropy raise additional red flags in front of my eyes. The von Neumann entropy is a mathematical function of the density matrix, an arbitrary matrix constructed on top of the Hilbert space. But it is not really a property of a pure state (that has formally \(S=0\)) because pure states don't automatically produce ensembles. We normally talk about ensembles of "states that are macroscopically indinstinguishable from the given one" but because they deeply modify our expectations about "what is distinguishable", all these equivalences may become too strong or to weak and therefore vacuous. If every two states are distinguishable by some homeopathic traces left in the correlators at infinity, shouldn't it also mean that the "ensembles" are perfectly separated from each other and consisting of individual microstates?

Their overall statement (e.g. about the constant, near-maximal von Neumann entropy at all times, during the life of a black hole) just looks too strong to me. It seems that they are throwing out the baby with the bath water. And I feel that when they claim that they may distinguish almost anything by traces at infinity, they must be neglecting some uncertainty principle at some level that prevents you from making too many too fine measurements. So I have trouble with the whole methodology of "using correlators to distinguish states". Two states may only be said to be orthogonal (and therefore strictly mutually exclusive) if they're tight to different lists of eigenvalues of a complete maximal list of commuting observables. If you start to play with lists of observables that don't commute with others in the list, you will end up with spurious, excessive ideas about "how many states may be distinguished from each other".

Well, there will be extra papers on similar topics written by a distinguishable group of authors. I am pretty sure that many physicists will share many of my reservations so let's wait and maybe they are resolved in some way.
Luboš Motl v 5:44 AM
Share