Bloomberg posted this amusing map of the world: 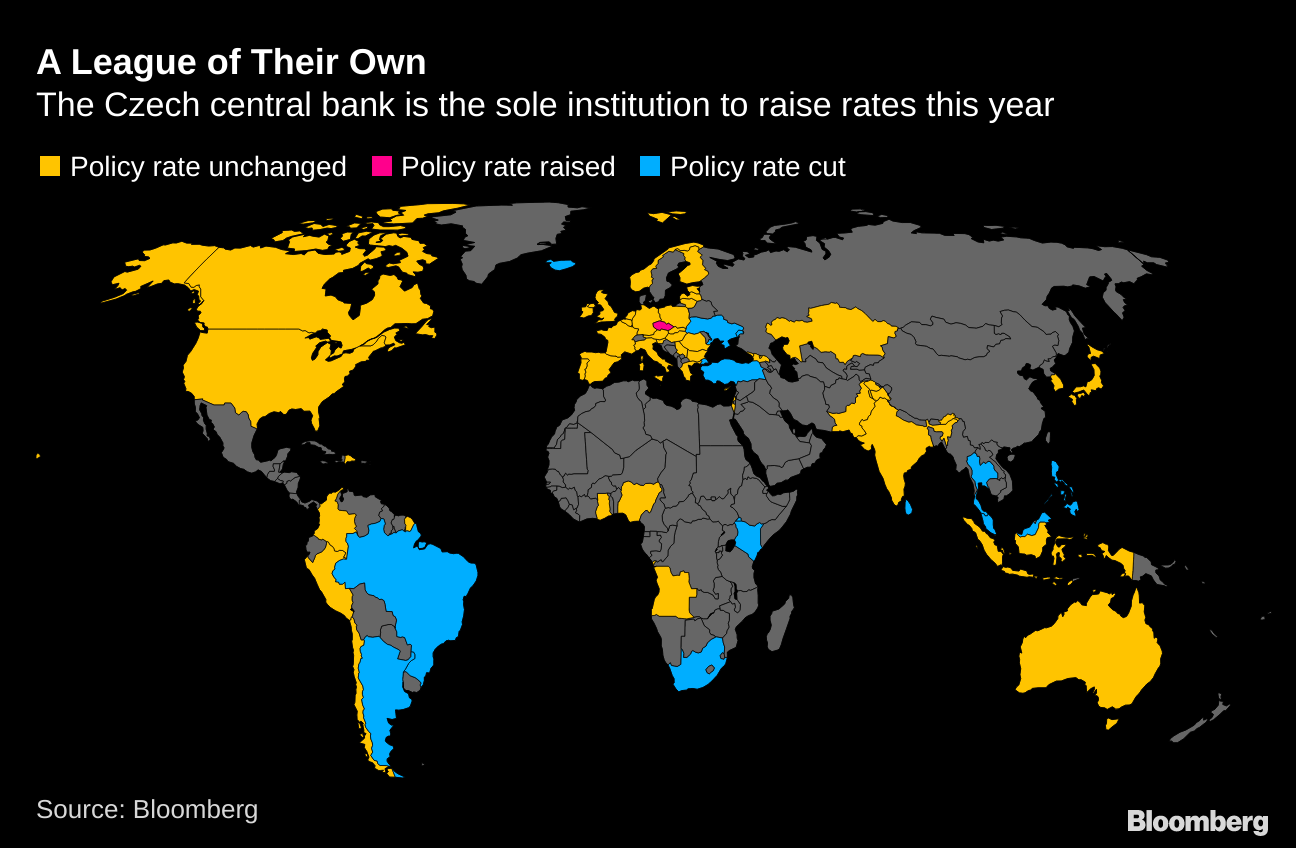 Countries with central banks are divided to three groups: those that haven't made a decision in 2020 yet (grey), those that kept rates (yellow), and those that lowered the interest rates (cyan).

And then there is a fourth group, a league of their own, the Czech National Bank (pink). It raised the discount, two-week repo, lombard rates to 1.25, 2.25, 3.25 percent, respectively, all by 0.25%, today at 2 pm Prague time. (The middle, repo rate is crucial to determine commercial interest rates.) The announcement was delayed by 1 hour – either because they wanted to lower the shock or because they needed an extra hour for wrestling.

The decision strengthened crown from 25.10 per euro to 24.90 per euro before the crown weakened again to 25.00 per euro, probably after traders noticed that the bank "expects" the weaker rate near 25.3 per euro throughout 2020. It is still much stronger than above 25.5 a month or two ago. 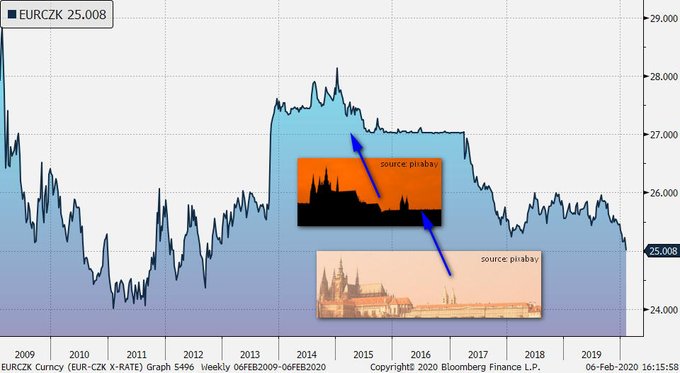 Those below-25 figures mean a crown strongest since 2011-2012 when it was below 25 as well. The short-lived historical high in 2008 was below 23, however. Note that the graph above shows the very clear "Prague Castle technical pattern" between 2014 and April 2017. Controversially enough in a nation of savers, the central bank kept crown weaker than 27 per euro, allegedly to fight the threat of deflation.

In early stages, since the November 7th, 2013 decision (anniversary of the Bolshevik coup in Russia), traders perceived risks that they would weaken it further, perhaps to 28 or 29, so traders were guessing the probability of such an escalation and that's how the cathedral oscillations were created. In the last 1-2 years of the intervention, the intervention became a clear redundant joke, waiting to be abolished, so the rate was as close to the declared lower bound 27 as possible (27.02 in average).

What's surprising is that all the financial press called the today's decision surprising. That's based e.g. on the perfect consensus of 13 analysts asked by Reuters who said that the rates would be kept constant.

For some reasons, a majority of the board members of the central bank had the opposite opinion than those 13 analysts. If you think about it, such a wrong guess is weird because all these 20 or so economists have the same information and the 13 of them should be capable of guessing the move by the remaining 7. The analysts aren't really expected to "disagree" even if they would decide differently because their job is to analyze the board members' thinking with both the economic data and the empathy. But all of those 13 got it wrong. A wrong consensus.

The Magnificent Seven: the ČNB board has earned quite some cult status among Forex analysts

I think that while the decision was narrow, it was a complete duty of the central bank to raise the rates (maybe already on the previous meeting) because it's really the primary duty of the Czech National Bank to keep the low nonzero inflation in the 1%-3% window and for a few months, we've seen inflation rates such as 3.2%. Relatively to the conservative Czech expectations, this is basically hyperinflation. Many people fail to have the carts to be loaded with banknotes when they need to buy a loaf of bread. But otherwise the consequences are almost the same: with sub-1% interest rates, a saver is losing over 2% annually in real terms. Of course she should have some stocks etc. but many people are old-fashioned savers.

So of course it was right and conventional, according to our traditions, to increase the rates.

The consensus failed. It often does. This was a situation in which there wasn't a very good reason why the consensus should fail but it did, anyway. In most other situations, there exist much better reasons why the consensus may fail and unsurprisingly, it often if not usually does. The more the consensus "thinkers" nurture the culture of group think, the more likely the guess is wrong. The more they guess the result of something that differs from them (such as the objective behavior of chaotic systems in Nature), the higher the probability of the failure is, too.
Luboš Motl v 6:32 PM
Share