And only once per the history of mankind

The uninterrupted apocalyptic propaganda in the fake news media makes the more gullible one-half of mankind believe that we're in midst of a plague that will kill most of us and shorten our lives by a decade in average, or something like that. In the Daily Mail, Peter Hitchens nicely wrote about his handles-germophobia etc. and the infection of Britain by a bad case of madness.

OK, what is the actual shortening of the life implied by the hypothetical worst case scenario? Note that about 150,000 people have been infected with Covid-19 so far, less than 100,000 are detected as active cases now. The undetected cases may be at most another 100,000 in the world, I think. But we're going to imagine a completely different situation in which 7.7 billion people – which is 50,000 times the current accumulated number – get the infection. Some fraction will die, it's mostly the older people who didn't have much life ahead of them.

All the people who die see their life shortened; this is one of the negative side effects of death that has actually existed for a long time ;-), despite the implicit claims in the fake news media to the contrary.

OK, I have a super simple Mathematica Notebook for you that spits the number "0.25 years or so" for us. Let me go throw it. First, we must understand something about the life expectancy.

Life expectancy is the average time you will waste by living. Informally, it's the length of one's life. I will use a Western value of 81.5 years. However, that's really just the "life expectancy at birth", i.e. for a human that was freshly born alive and whose life hasn't been shaped by anything. A funny fact is that the average age at the moment of death is expected to be higher for people who are already older. Why?

It's because we already know that a 50-year-old person couldn't have died younger than 50 years of age. So we're doing a kind of a conditional probability calculation. Look at this page to see that the 70-year-old humans have the life expectancy around 85 years, 80-year-old ones have about 90 years, 90-year-old have 95, 100-year-old have 102, and 114-year-old have less than 115, you know. The probability that you will survive for several more years becomes tiny if you're already one of the oldest people on Earth.

Great. I can write a nice fit giving you the same graph. Here is the function:


It's like some Pythagorean hypotenuse constructed out of 81.5 and the age multiplied by a coefficient, except that I pick the 5th power instead of the 2nd power recommended by Pythagoras. Here is my graph: 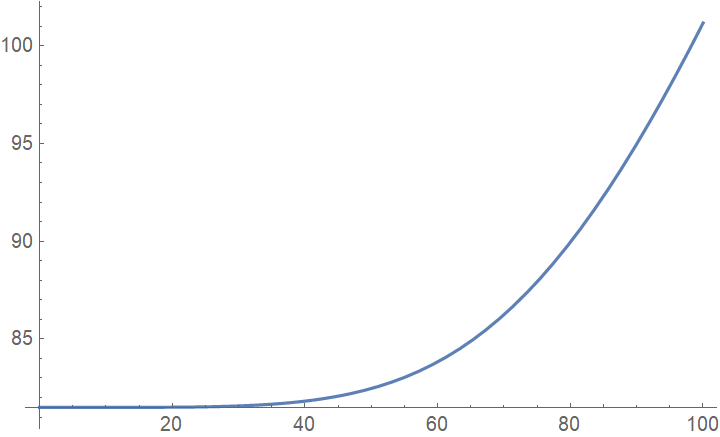 My function only works up to 103 years of age, then it starts to produce the values that are slightly lower than the age (you should have already died!). So I will discuss age from 0 to 103 years only, assuming that all older people are registered as 103-year-old ones, OK?

Then I need some case fatality rate (CFR). I will use the screenshot from Italy which indicates basically 0% below 30 years of age and up to 20% for people above 90. (Here is an updated PDF file for the first 1017 deaths; source: Istituto Superiore di Sanità, the main epidemilogical body of Italy's official National Health Service.) My fit is a linearly rescaled, zoomed, and shifted tanh function: 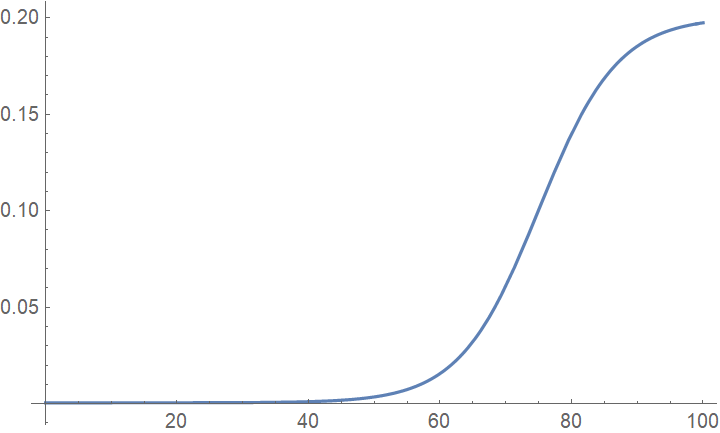 The constant 0.1005 was chosen to produce the asymptotic death rate 0.05% for the very young; the odds of death are very low here and because no deaths are known, the relative error margin of this percentage is high. These young people will have a very small contribution to the "expected shortening of one's life", anyway.

Great. The risk of death predicted by my fit is comparable to the Italian death figures even for the ages 30-80, for various brackets. Note that our death calculation will almost certainly be an overestimate because there are many undiagnosed people in Italy whose disease is mild. Now, here is the product of the previous two graphs:


It's the average number of years (as a function of age) that the assumed infection steals from an average person of a given age. 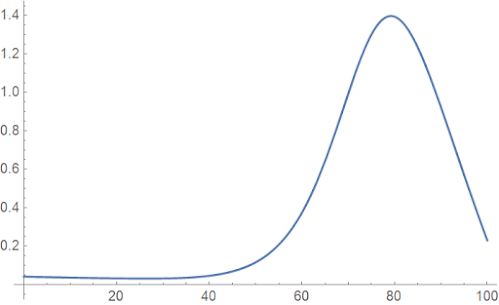 You see that it's some Bell curve centered around 78 years of age, with the width around 10 years in both directions. The maximum number of "years stolen from one's life" is about 1.4 years for the most affected, 78-year-old people. People below 78 years are affected less because they have a lower fatality rate; people above 78 years are affected less because they didn't expect to live for too long, anyway. People below 50 years see their life shortened by less than 0.2 years (and much less, for the much younger ones).

Finally, what is the average of the shortening? I need to know the distribution to ages. Take the global PopulationPyramid.NET. Their histogram shows a nearly linearly decreasing number of people in the age brackets as a function of age, while the decrease is somewhat slower for younger people. The individual countries have vastly more structured population pyramids, of course, because those pyramids display a reflection of the big wars and their echoes and other things. Here is some code:


AgeStructure and ageS are functions that only differ by the division by the normalization constant agesDenom (about 277); ageS is normalized to a unit integral from 0 to 103.

Let us now multiply all three functions of age and find the integral (the mean value): 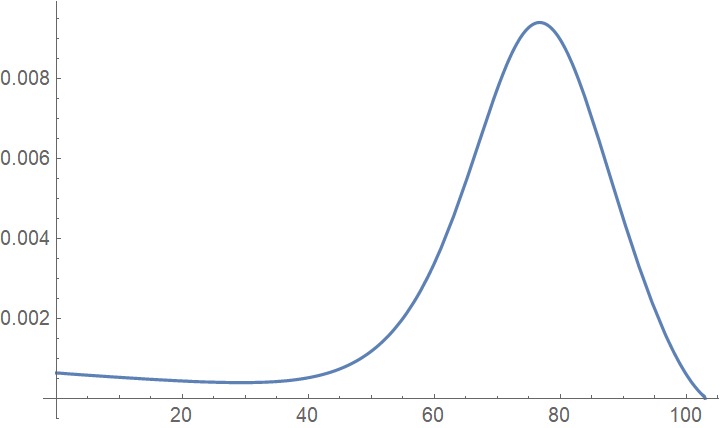 And the number that the numerical integral gave me is 0.285 (years). It's about 3+ months (or 1/300 of the average lifetime) of the shortened average life in the worst case scenario when all of mankind undergoes the disease. Now, it's a rough estimate because I wasn't terribly careful about distinguishing the global and Italian functions, men and women, and other things. You're invited to do better.

Now, try to think about the implications of the result, "3 months". It really means that even if we were certain that our efforts totally stop and tame the disease, that these efforts are both a necessary and sufficient condition for such a containment, it would still be true that "destroying more than 3 months of everyone's life is already not worth it".

In reality, lots of people clearly plan to destroy more than three months of everyone's life and work, and do so without any good reason to think that such an intervention to mankind's life makes a radical impact on the fate of the virus. It is spectacularly obvious that with this approach, the mitigation efforts are not worth it!

The current penetration of the virus is 1/50,000 of the worst case scenario so the virus has shortened the average life by 3 months divided by 50,000 which is about 3 minutes. The hysteria has surely totally crippled much more than 3 minutes of the average person's life, right?

Also note that the figure "3 months" is exaggerated because we may probably protect almost all the people contributing to most of the "3 months", people above 75 years of age, by hiding them more carefully from other people. With such highly localized policies, the average for the "slightly improved worst case scenario" may easily drop to 1 month and that's already compatible with a completely unlimited life of the people below 75.

Even if this virus gets to everyone or nearly everyone, it's just fudging not the end of the world. Such a complete penetration would be a one-time event that shortens the life of the people who are currently alive by 3 months in average. We were born to a world with a certain life expectancy and some expected population pyramid and other things. But all these things were primarily dictated by Mother Nature and Her biological laws aren't permanent (the quality of our lives, wealth, nutrition, clean environment, healthcare, and civilization also matters but those things are extra terms added to the natural ones, not tools that may completely deny Mother Nature's power). Instead, unlike the laws of fundamental physics, the laws of biology are fuzzy, emergent, and dependent on the variable conditions. Nature has the right and power to change these laws. When it produces a new virus (or when a lab produces a new virus) that significantly (20%) reduces the survival of the very old or those with certain underlying medical conditions, it's just a fact about Nature.

Hysteria can't change anything – hysteria only harms the hysterical person and those who have to live with her. It is not always a good idea to "vigorously fight" against something that many people consider undesirable. Many events are both "apparently undesirable" as well as "inevitable".

P.S.: Overloaded hospitals could increase the fatality rate. But there are lots of things that will tame the risks. Remdesivir is said to have saved 17 lives on the Diamond Princess cruise ship where only 7 died out of 700 cases or so. There are indications that this cure isn't 100% effective. On the other hand, saving "most" of patients already means that the final "average shortening" will be closer to zero than to the worst case scenario above.

P.S. 2: You may buy Remdesivir at Alibaba. The prices and masses are all over the place. The dominant price is $2,000-$3,000 per gram. You need about a gram to cure one patient. The Ebola test have administered 100 mg intravenously (injection) per day for 10 days. China has probably stolen all the know-how.
Luboš Motl v 8:19 AM
Share