Italy: for people below 50, Covid is on par with flu

And that's why the elderly should be segregated, protected, and the younger ones should own most of the free world

An hour ago, Italy reported disturbing high new numbers: 2547 new infections and 250 new deaths (huge but well below 2,000 daily deaths in Italy). Both numbers are a daily record. The daily deaths are almost twice as high as China's peak in mid February, despite China's having a population larger by a factor of 23 (1.4 vs 0.06 billion people).

A terribly cynical Ivan Mládek's song about a grandma in Blatná who administratively transferred some real estate in Blatná, Czechia to her descendants but – to make the descendants really pissed off – she seems totally immortal. Cruel but still funny, indeed.

It's troubling and this evolution of Italy is something that I didn't predict weeks ago – and arguably couldn't predict (interestingly, both Italy and Iran were also heavily affected by the Spanish flu in 1918). But look at this graph which is about 2 days old: 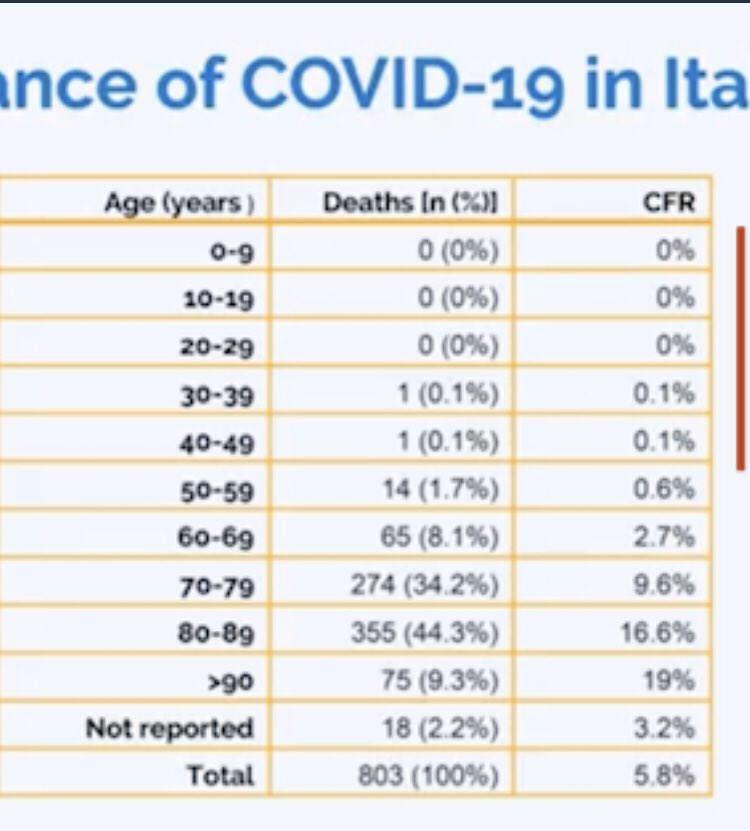 The middle column percentages are computed from the total number of fatalities, the CFR is the case fatality rate, the probability of death for an infected person.

Among 803 Italian deaths counted (it's 1266 now), only two fatalities are younger than 50 years. They belong to the 30-39 and 40-49 brackets (1+1). There are no Italian deaths below 30 years at all. So for the infected people below 50 years of age, the average probability of death is around 0.05%, lower or equal to flu! And the rate is probably much lower even than 0.05% because most of the infected people with mild symptoms (and those are especially the young ones) are escaping the Italian tests. Note that flu is more capable of killing young people (it's more age-blind) than Covid-19.

This dependence on the age is brutal, indeed. Above 90 years of age, the risk of death is around 20%. I don't know another disease that would target the elderly in this clear way. Incidentally, the RNA of the virus (when you translate it from tetral to ASCII) contains a code in BASIC:


It's curious. Why would RNA look like a program? And why is in BASIC? Maybe it's because the local blogger wouldn't be able to fake C++? ;-)

At any rate, it is interesting. We know so many diseases that are decimating all age groups equally and so many diseases that were focusing on killing babies, kids, or children, whatever is the difference. It surely looks like a plan of a director of a pension system who hired some genetic engineers and ordered them to create a virus that kills the elderly.

I do believe that any sensible policymaking must take these huge correlations between the fatality rate and age into account. In particular, people below 30 and maybe 50 should really consider this disease to be another strain of flu, a disease that is effectively indistinguishable from flu although its effect feels more abrupt.

(Check Jorri Jorgensen, a 65-year-old squarehead girl from Utah, who was diagnosed with Covid-19 on that big ship, just like her husband. She is fine and wanted to do work hard in the gym. But they treated her like a witch so she went to ride her mountain bike instead. She has no clue why people hysterically buy toilet paper; she would only need a yoga mat for her quarantine. The disease felt like a 99 °F minor fever plus 2-3 hours of a strange feeling.)

OK, so it shouldn't be the young people below 30 or 50 who stop their life. Instead, those should live as much as possible and perhaps actively try to undergo Covid-19 and become immune, as I previously recommended to groups such as kids in Lombardy.

A 1979 Czech-Italian duet of Hana Zagorová and Drupi. The latter was the most famous Italian singer in Czechoslovakia while most Italians probably have no clue who he was. He starts to sing at 1:48. See more about Italians in Czechia.

On the other hand, the protection of the vulnerable ones – elderly – should be considered a "client-side" problem. They should get homes that are sufficiently isolated from lots of people around. Services, perhaps including shops or food delivery, should be made by the survivors who hopefully don't spread the disease anymore. It's likely that the percentage of the survivors would climb in the society and that could be useful.

In fact, maybe the old or vulnerable people should be quickly gotten some temporary homes within a week and the younger part of the society should restore the business-as-usual as quickly as possible (instead of the "work from home" regime etc. that simply cannot be equivalent to the proper work as it existed before this hysteria). Meanwhile, places like big cities shouldn't be forever inaccessible by the vulnerable ones. I would declare "Fridays for Future of Seniors" which would mean that every Friday, all not-yet-immune people (who have some risk of spreading the disease) must leave the big cities. Those would be disinfected on Friday early morning. Only seniors and young immune survivors would be allowed in the cities or otherwise dangerous places (on other days). Note that to find this solution, you have to solve a similar problem to the problem "hot to get the wolf, sheep, and cabbage in one boat with two seats to the other side of the river". ;-)

This whole segregation plan may turn out to be a waste of money as soon as a vaccine is available but I hope you will thank me, anyway!

People of my hometown #Siena sing a popular song from their houses along an empty street to warm their hearts during the Italian #Covid_19 #lockdown.#coronavirusitalia #COVID19 #coronavirus pic.twitter.com/7EKKMIdXov

Folks in Siena, Italy sing Canto della Verbena about their beloved town pretty well (lyrics). I hear a tragic tone under this melody. And some signs that Italy has lost the technological edge after the dissolution of the Roman Empire, even relatively to us.

I think that the selective Covid-19 fatality of the old people must be taken into account in any wise policymaking. But this very point is something that collides with the idiotic politically correct approach that is so widely cherished and that wants to treat everybody as equal (regardless of age in this case). The real issue is that Nature – and this virus with crown-like spikes (therefore coronavirus) – is not treating the cohorts equally at all. We shouldn't, either.

P.S.: Czechia has 141 infections now (58 of them are in Prague – either because it's a higher-density place or a place where people more travel and more encounter others), see the Czech statistics page, including 2 serious ones (men), zero fatalities, but we have already closed schools, kindergartens, and borders, almost completely, wow. I surely do expect the virus to remain under control in Czechia. Will our part of Europe be the surviving and prosperous East, just like after the fall of the Roman Empire? How would it work? Would we have to defend the border with force against some pressure from the unlucky West?
Luboš Motl v 7:24 PM
Share