There is a fraction of the people who completely understand that the "cure" is worse than the "disease" (COVID-19). Candace Owens, Peter Hitchens, Lord Sumption, RJ Smith, perhaps Laura Ingraham, Brit Hume, I could consider for a while.

Here's an updated graph of initial unemployment claims in the US. In the last week alone, nearly 6 million Americans filed for unemployment. This breaks the previous record of ~3 million... which was set the previous week. We're dealing with truly staggering numbers here. pic.twitter.com/8IOwHMxYAf

The lockdowns and the excessive social distancing culture is clearly killing the whole civilization. The animation above is a sort of black humor (the graph gets vertically compressed almost 20-fold in the last steps) but, as Sheldon Cooper has said, it's funny because it is true. It shows how, for half a century, during all the "famous recessions" and wars and big hurricanes, there were those 345,000 new unemployed Americans a week in average. But the last two weekly numbers were 3+ million and 6.7 million, respectively.

The unemployment rate has almost certainly jumped from 3% above 10% and this update doesn't include the ongoing week yet. The trend may continue. A Federal Reserve regional boss estimates a 50% drop of the U.S. GDP and a 30% unemployment rate.

I completely share this estimate. Most of the industry will get restarted in some way, after some months, but the hysterical social distancing culture will half-kill the service sector. 60% of the GDP may be the service sector (it is so in Czechia) and 1/2 of these jobs will be unsustainable (30% unemployment from those), 1/2 of these jobs will be kept but will become 1/2-productive. So the drop of the GDP is 30%+30%/2 which is about 50% if you include some lost industry.

Now, for example, Alessandro Strumia implicitly says that these jobless numbers are just an illusion. It's enough for some "actions" to be taken and the people will get employed very soon. It means that one may basically ignore the singular graph above. What!? How can someone write such a thing? How much your brain has to melt down for you to write a similar sentence? What is the "action" supposed to be? Like so many others, Alessandro is a clueless Bolshevik who seems to believe that the government is the key part of the economy and it may also do miracles easily. A classic left-wing pseudointellectual parasite who has never done anything tangibly useful and who believes that money grows on trees and it's enough for smart bureaucrats to decree that everyone has enough money. It's how the system has worked for him.

And lots of people are spamming my timelines with similar lunacies. Petr Moses, a Czech expat in Western Europe, is musing about the "excess corporate debt" in late 2019 or a slowdown from some 2.9% to 2.7% half a year ago, or something like that. How is it possible that these people are so completely blind to what is happening? So utterly and hopelessly financially illiterate? The current drop of the GDP is by tens of percent; it was tenths of a percent before this hysteria exploded. Tens and tenths aren't the same thing.

Those 10 million Americans were fired by their employers in the previous 2 weeks for a very good reason. There is no way how these companies – and pretty much any companies – may make these people useful i.e. profitable again. Many of the people made their living by meeting people, talking to them, delivering some stuff, cutting their hair, bring them dinners in the restaurants, whatever. These activities cannot really continue given the breathtakingly changed culture of "what people may be doing". Many of these changes of the culture were promoted to laws in most Western countries – including the mandatory closures of businesses and bans on events – but even if it were just a very widespread habit, the economic damages would be absolutely devastating.

You can't "undo" the uselessness of all those people under the new conditions by a government decree or by empty dishonest clichés about "actions"; the difference between a useful (capable of producing profit by some work) and useless person on the job market is damn real, not just a convention. And in the short run, the job losses may be even deeper because even the jobs that are "viable in the longer run" will be abolished due to the decreased demand or dependence on some other activities that went out of business.

As I mentioned, the economic damages are also some two orders of magnitude greater than the impact of some minor oscillations in the economy that we saw in 2019. All the oscillations in 2019 have been rendered absolutely irrelevant by the events of the recent 6 weeks or so. His speculations about the healthy or unhealthy levels of corporate debt in 2019 have been rendered totally irrelevant. These people have always been wrong e.g. about the statement that the "excess cash in the system" creates recessions. The only bad things that the excess pumping of cash may create is inflation – or either more uniform or more localized asset bubbles. Those weren't really occurring up to early 2020, at least not to any significant extent that would deserve any attention now.

How can Mr Moses claim that the industry doesn't feel the lunacy? Of course it's mostly jobs in services that are being destroyed these days. But Škoda Auto, the Czech carmaker that made over 100,000 cars a month up to recently, has been completely stopped, too. Stopped officially because they are also afraid of employees that infect others, like everybody. The suspension was extended to April 20th and further extensions may hypothetically follow. Just Škoda Auto makes up 5% of the Czech GDP i.e. 12.5% of the Czech industry's contribution to the GDP. TCPA Kolín is also closed, another percent. Lots of additional percent are suppliers that need to stop. And it's clearly not the only clique of industrial companies which was largely or completely hibernated in recent weeks.

These people just seem to completely misunderstand absolutely everything about economics. They don't seem to distinguish millions, billions, and trillions. They still think what has been done to the economies – and it still keeps on escalating – is some minor oscillation involving "millions or billions of dollars". But the damages to the economy are already worth trillions and probably tens of trillions by now. One trillion is equal to one thousand billions. One billion is one thousand millions. How can someone misunderstand these differences?

Or take the people who say e.g. that the shutdowns are good for "waiting for the vaccine" (or a better treatment of this disease). Shutdowns cost tens of trillions and affect billions of people who have really nothing to do with the job of searching for a vaccine or a drug. Can't you see it would be more effective both medically and 1,000 times cheaper financially to double the spending of just billions of dollars for the Big Pharma business – a tiny fraction of mankind? This idea that "shutdowns are good for the waiting for a vaccine" really means that those people don't distinguish billions and trillions of dollars. They can't distinguish billions of people from millions of physicians in the world or even from thousands of virology researchers.

Of course if the social distancing culture (or even laws) is kept in place, the decrease of the GDP by dozens of percent, and hypothetically more than 50 percent, will be almost "permanent" (many years), along with the correspondingly high unemployment rate. Countries that will want to avoid bankruptcy will have to slash their expenses massively, too. Welfare fees, pensions, minimal wages will have to be slashed (either nominally or by huge one-time inflation). Non-essential jobs such as university instructors will have to be abolished, too.

The economic output that was already lost relatively to the "business-as-usual" may be $10 trillion so far. It's the value of five hundred huge new particle accelerators. The hostile anti-science activists who would have wanted to ban future colliders because $20 billion was too much don't say a peep when tens of trillions are being thrown out of the window, as in the recent weeks. And it seems that most of mankind just doesn't see the absolute insanity of all these policies and judgments, especially if these judgments are observed in the context and combinations. A fraction that may be a majority of mankind has apparently lost all of its marbles.

COVID-19 is just another flu-like disease that doesn't existentially threaten any nation on Earth per se and, except for Italy and Spain, it hasn't even increased the overall daily fatality rates (and even in Italy, the rates are still below early 2017, see Euromomo). But the insane hysteria that has turned so many people into unhinged animals who deny absolutely basic facts and who don't distinguish millions and trillions surely is existentially threatening for most nations – and basically all of them whose leaders weren't strong enough to prevent this extraordinarily dangerous slippery slope.

In the hypothetical case that the lockdown culture is kept and its insane defenders feel increasingly powerful, most of the countries and most of the companies in them will go bust before the end of 2021. General chaos (and maybe violence that cannot be contained) will emerge, perhaps gradually, perhaps in some abrupt phase transitions. Starvation of tens or hundreds of millions of people and civil wars may become basically unavoidable. 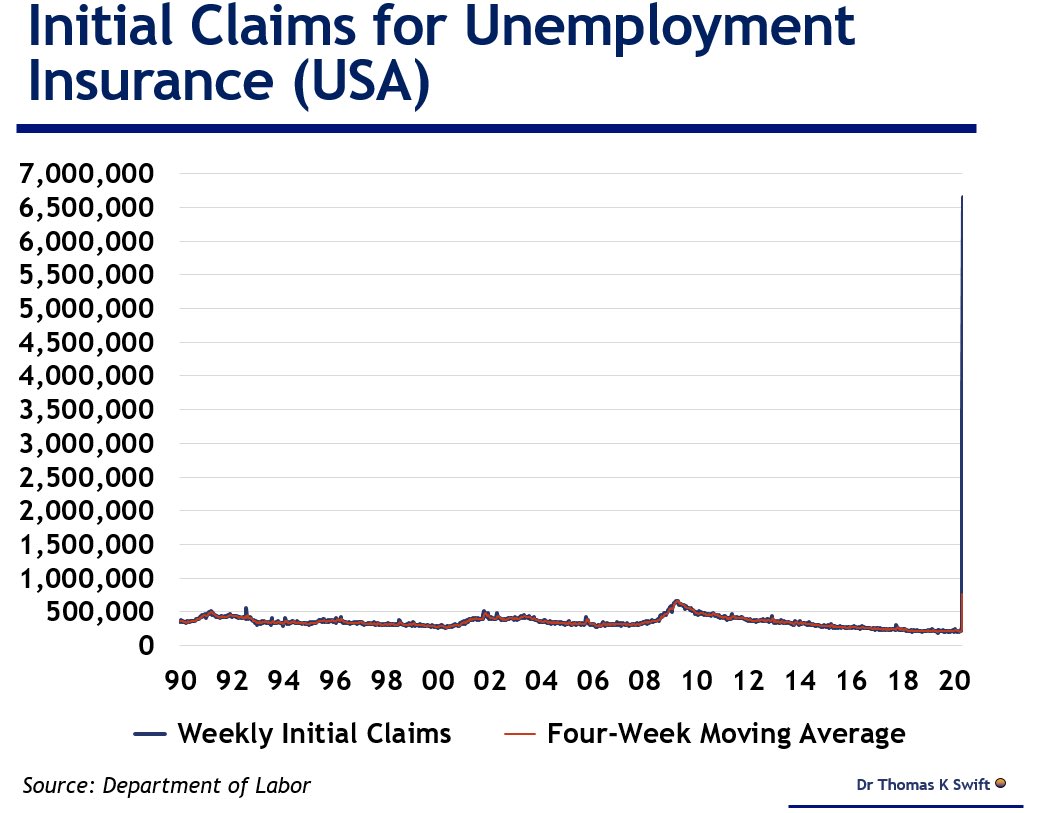 Who doesn't see in the graph above that we have entered a completely uncharted territory – at the level of not just 100 years but something like 1,000 years – it just an absolute imbecile. And if the percentage of such imbeciles is above 50% and if this inequality gets combined with democracy, it's a deadly cocktail for the civilization, indeed. Countries have at most two years to adopt some Swedish model, perhaps with masks or other non-devastating policies, otherwise they will disappear from the map of the world.