The doubling time always gets longer and longer

Most of the people who try to think about Covid-19 seem to be utterly brainwashed by the villains on TV channels, the flatteners of the curves, and assorted crackpots, liars, and terrorists. But it always shocks me when I see the people whom I expect to know better who also parrot some deep misconceptions. 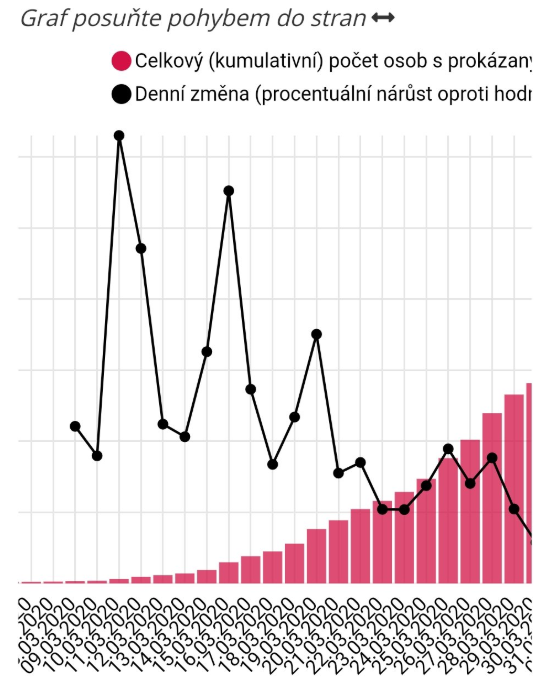 OK, we were talking about the influence of the mandatory masks on the growth or decrease of the epidemics. And someone told me "but the disease started to decrease already before March 18th", the date when Czechia introduced the mandatory masks. Now, the words "disease decreases" aren't really well-defined but the claim that the "disease either slowed or decelerated" before March 18th seems obviously wrong to me.

Before March 18th, we were really consistently going from units of cases to thousands of cases. So what sort of a "slowdown" could you possibly refer to during the period that looked like an exponential growth? I wondered why it wasn't obvious to someone else. What did he mean by the "slowdown before March 18th?"

If the black curve were constant i.e. horizontal, the number of cases would simply be growing exponentially. We may say that the fact that "the black curve decreases" is equivalent to a number of cases that depends "sub-exponentially" on time if you understand me. The rate of the "percentage gain per day" is slowing down on the graph above and many similar graphs, indeed.

But it's completely dumb to boast about the decreasing character of such a black curve, about the sub-exponential behavior of similar graphs. Why? Because the evolution of populations in the real world is always sub-exponential. It just can't be super-exponential.

What I mean by the "peak" of the disease is the actual day in which the number of new discovered cases (or the estimated percentage of the infected population or the total number of new deaths) was maximized (perhaps after some smoothing). Czechia introduced mandatory masks on March 18th. If they matter a lot, it means that March 18th was the first day with a substantially lower number of infections that took place on that day.

However, it takes 5 days in average after the infection for symptoms to emerge – March 23rd is predicted for the symptoms – and extra 3 days after the symptoms in average before the people go to the hospital. So you expect the new cases to start to drop, as seen in the hospitals, on March 26th or so, and that's exactly what our graphs show. We have the high of 380 daily cases on March 26-27th or so. (Now Czechia is getting just some 100 cases a day, despite the much higher number of tests than a month ago.)

9 days after the onset of symptoms in average (or 5 days after hospitalization), we get the death if the patient is destined to die. When the deaths are assigned to the actual date when the death took place (and not a typically later date when it was reported or discovered), we had the peaks on April 5th and April 8th (13 and 14). This is just "somewhat" later than the date, April 1st or so, that is 9 days after the onset of symptoms or 5 days after the hospitalization (discovery of the case on March 26-27th when cases were first affected by the mask policy). The masks aren't used in the families so maybe the disease was continuing for one more cycle – when the seniors caught it from relatives in the mask-free households.

OK, this guy sees the decrease of the black curve i.e. the sub-exponential character of the curve and describes it by the – in my opinion totally insane – verbal commentary that the "disease was already dropping or slowing down in Czechia before March 18th". The drop isn't any victory and if some "flatteners of the curves" brag about similar drops of the rate of the exponential growth as a victory, they are either demagogues or complete morons. You don't need to do anything to get such a drop. Whatever are your policies, or their non-existence, there has never been any substantial prolonged super-exponential growth of the population in which the doubling time would be getting shorter (the super-exponential growth could be linked to a "singularity" in the Kurzweil sense).

It's simple. Various layers of the population are finite and associated with different speeds of the possible exponential growth.

Can the disease get tripled every day or every two days? Well, perhaps. For you (or the virus) to achieve this outcome, you need people who

1. have lots of social encounters \(X\)
2. can become contagious very quickly after they get infected (after \(Y\) days)

It's really the ratio of these two quantities \(Z=X/Y\), the number of contacts divided by the delay (between infection and contagion), that matters most. Fine. You have some people in the population whose \(Z\) is very high. If you only focus on the subset of a nation which has the people with a high \(Z\), and you just erase the remaining people from the picture, this sub-nation looks like an environment waiting for a rapid fire. These people meet a lot of others, including other people with a high \(Z\), and they deliver the newly produced viruses during a day or two (if not earlier).

It's fire. If you cherry-picked such people and made a town out of them, you could easily get a doubling of the virus each day. And indeed, such people are out there even if you don't concentrate them in some town. They are interacting with each other. And the disease really has some channel that may grow exponentially with a very short doubling time, i.e. by a "very quick exponential growth".

But the funny point is that the number of people with an extremely high \(Z\) is low, a very small fraction of the population of a nation. So the disease grows in this "community" that is out there but the disease equally quickly runs out of these people. The people with a high \(Z\) are "almost guaranteed" to get infected rather quickly and they become irrelevant. You may say that the high \(Z\) sub-nation achieves its sub-herd immunity within weeks.

In the later stages of the growth of the disease, when the high-\(Z\) people have already been exposed to the virus, the further growth of the disease is dominated by the carriers with a somewhat lower value of \(Z\), simply because the super high \(Z\) people are already out of the "game" – they have played the game. That's why these later stages have a longer doubling time. The most relevant group that spreads the virus are those who have a somewhat lower number of contacts and/or who need a somewhat greater number of days to become contagious after they are infected.

And that's why the black curve always drops.

At the very end of the growth of the disease, the people whose \(Z\) is high enough for \(R_0\gt 1\), but otherwise lowest possible (\(Z\) that saturates the first condition) become the dominant propagators of the virus. When the disease runs out of these "slowest among the usable" people, it runs out of steam, too.

The fact that the doubling time is short at the beginning and gets longer ("deceleration of the exponential growth") is completely analogous to a similar problem in radioactive decay. Imagine that you have some radioactive isotopes in your beloved coffee mug. What is the half-life of the material? Well, you measure you quickly the stuff decays. At the beginning, most of the decays will be those of the very unstable isotopes, so "it" will look like a very short half-life. Those disappear at some moment and later, it's the somewhat more stable isotopes that dominate the decay, and so on. Although some signs are opposite than in the virus population growth (the isotopes fade away exponentially), it is still true that Nature as a whole first runs out of things that are associated with short doubling times or half-lives.

I think it's clearly natural and "simple" for a person to look for the (nation-dependent) "peak Covid-19" as the day when the number of new cases or the number of deaths was maximized. I think it is common sense. But there is this whole propaganda that pushes many people to identify the peaks and progress according to much more contrived criteria and the people clearly don't know what they are doing and why they are doing so – they have been brainwashed.

The brainwashing of the people is annoying for its own sake. It is just a catastrophe – a vastly more serious one than some flu-like pandemics – when people can't think independently, when they rely on lots of assumptions and propositions that they actually can't defend themselves. When it's so, almost all such assumptions are just wrong.

But in this case, like in most others, the brainwashing may have additional terrible consequences. I think that the focus on the dropping black curve, i.e. the sub-exponential character of the evolution of cases, i.e. the growing doubling time, has the effect of taking credit for something that can't be considered the consequence of any policy – because it is basically a mathematical tautology.

Unless you have some extremely rigorously proven set of statements, don't try to build convoluted sentences with contrived quantities such as the relative increase of cases per day. The common sense people who will identify the peak according to the absolute number of new cases (or deaths) per day will do better – and unlike you, they will avoid totally ludicrous assertions such as "the disease was already slowing" in the period when it came from several cases to thousands.
Luboš Motl v 5:59 PM
Share