The Institute for Advanced Studies in Princeton seems to be all about "tangible science" these days.

Two weeks ago, Juan Maldacena studied the magnetic black holes of the Mount Everest mass whose magnetism is so strong that the Higgs mechanism is undone.

As Orion Pax has pointed out, his fellow Breakthrough Prize winner Edward Witten may have trumped Juan in the degree of realism of his down-to-Earth science. (It's down-to-Earth as well as all other directions, as we will see soon.) The astro-ph paper is called


Searching for a Black Hole in the Outer Solar System


Witten has been apparently persuaded that there exists Planet Nine.

Note that a 2006 gathering of astronomers in Prague has decided that only 8 planets exist according to a new definition: Mercury, Venus, Earth, Mars, Jupiter, Saturn, Uranus, and Neptune. Sorry, fans of Pluto, but your darling was downgraded to a dwarf planet.

In the Kuiper belt, some 50 AU from the Earth (and the Sun), some strange things have been seen, some clumping of matter, or whatever. It is not clear from Witten's article how carefully he has studied and validated the arguments. However, it is clear that he has been persuaded that a new object should be there.

We haven't seen it by telescopes. So it should better be hard to be seen in telescopes, ideally a primordial black hole (PBH) that weighs 5-10 Earth masses (\(5-10\) \(M_\oplus\)). A black hole of mass that is comparable to the Earth sounds most attractive to a fundamental physicist but even if it is some less exciting boring invisible chunk of matter, Witten's prescription could work.

How will we find that black hole?

Witten proposes an extremely cheap solution. A few hundred or few thousand spaceships to be thrown into outer space, using the Breakthrough Starshot as a role model. Witten has received $3 million from the Breakthrough Foundation (note that "Breakthrough" appears twice, it's curious LOL) so he is capable of funding all the energy for all the launches. He claims that the energy per launch is just $8,000. You may happily multiply it by a few hundred and Witten remains solvent. 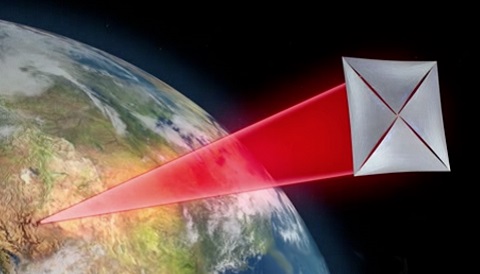 Then you need to build the launch system which may be some extra $517 million but let us not waste time with details. ;-)

The spaceships will be sent to all the directions where the hypothetical object may exist. Witten can already tell you how many directions: it is the solid angle \(4\pi \epsilon\). The fraction \(\epsilon\) is currently unknown but at least you have learned two Greek letters. All these spaceships should be accelerated to 300 kilometers per second i.e. \(0.001 c\). That's actually smaller than \(0.01c\) for which the $517 cost above was calculated, so Witten's launch system might be cheaper.

The probes Witten Shot 000, Witten Shot 001, ... Witten Shot 999 will be sent in all the plausible directions. How much time do they need to travel to Witten's black hole? Light needs 500 seconds for 1 AU, Witten's spaceship needs 500,000 seconds i.e. 5.8 days. At some time, Witten believes that the object will be 500 AU away from us, 10 times further than the Kuiper belt.

These Witten Shots will measure time precisely and send signals back to Earth. The precision must be 10 microseconds (they may need atomic clocks that survive the acceleration to 300 km/s), the objects measure the timing properly, and we discover the effect of the gravitational field of Witten's black hole as the deviation from the regular signals. That will tell us where Witten's black hole is approximately located, with a precision that will be hopefully better than the distance between the adjacent Witten's spaceships at that moment.

The final step is simple. Witten and Arkani-Hamed – who is thanked in the acknowledgement – will be sent in the approximately correct direction using the Witten 1000 spaceship. Both men will look around (it's just hundreds of billions of miles away) and do some experiments near the black hole. Arkani-Hamed will volunteer and jump into the black hole but Witten will wisely tell him that the Schwarzschild radius is some 2-5 inches and Arkani-Hamed can't safely fit inside.

It's a cute paper from Witten. Of course, most of it could be written – with some simplified equations whose detailed form probably doesn't matter too much – by a clever high school student but it's much cooler when Witten writes it, of course. ;-)

I think it's fair to give a few hundred or a few thousand spacecrafts to Witten, especially if you realize that Witten and his friends have been robbed of the SSC and other trans-LHC colliders so far. If you tell him "no", you may be obliged to build the Dyson Sphere so think twice before you say "no".
Luboš Motl v 6:44 PM
Share