Feigenbaum helps you to solve a puzzle, win BTC 0.05

An atypically intelligent Bitcoin user, perhaps Satoshi Nakamoto ;-), has celebrated the Bitcoin halving 22 hours ago by creating a Bitcoin wallet with BTC 0.05 (originally 0.03) which you may confiscate – it's about $450 – if you solve the following sophisticated puzzle:


A puzzle to celebrate the Halving! Solve it to win the ~0.03 BTC inside


The public key of the wallet is bc1qj7467e7r5pdfpypm03wyvguupdrld0ul2gcutg – click to see that the balance is still there – and you may decode the private key as well if you download 10 WAV files with electronic music. You need the uncompressed files, they have 347 MB in total. Write "$0.00" for the price you want to pay, and then pick WMA before you click at "download" for each.

Now, my first help to you is that I am probably going to save several hours of your time. I have played with three steganographic programs, Xiao, Steghide, and S-tools, which allow you to hide files into WAV and BMP (uncompressed audio and picture) files. I've tried 200 different passphrase combinations in these programs for those files and nothing worked. You may be luckier. "Less straighforward" things of this kind are probably too numerous and I find this task hopeless and not too promising.

But then I looked at the names of the electronic music compositions more carefully.

One is called "6times7". I don't know what it means except that the value seems to be 42, the answer to the Universe, something, and everything. However, there were also "Spectrographic Eyes", a name of one of the 10 compositions. That sounds irresistible to a physicist so I downloaded Sonic Visualizer. You should do it as well if you know what "spectrum" is and if you have downloaded the damn 347 MB worth of WAV files with me. ;-)

Why I am pushing you to download all this garbage?

If you know all photographs of all clever men in the world as well as I do, you will immediately recognize the picture: it's this one and the guy is named Mitchell Feigenbaum, a mathematical physicist who has done chaos theory. 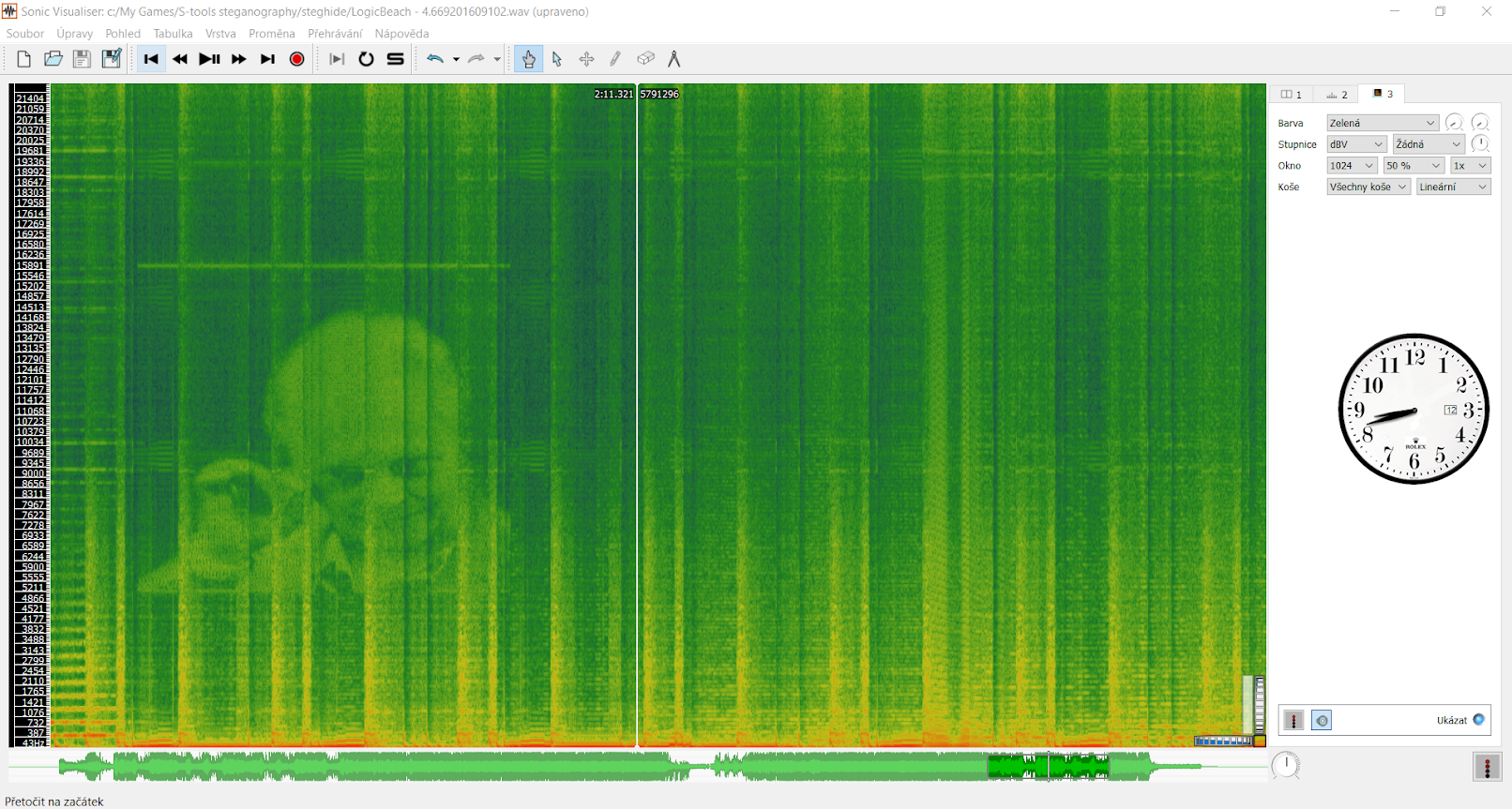 When the spectrogram of a "song" looks just like Mitchell.

The chaotic behavior was suddenly made predictable – I admit I don't quite understand this exciting stuff yet. And an important role in this theory about chaos is played by the first Feigenbaum constant


which just happens to coincide with the name of this catchy "song". ;-) And you may continue: look at the spectrogram of the 6times7 song, for example. There is a nice NATO logo at the beginning, some kind of an octagram. It's actually this picture of cardinal directions. What does it mean? The word "direct"? If you want to find some overlapping letters in a nice font, you will find several of them in the song "Far Away" (something like At overlapping with Mgn, or maybe Mt with Agn; maybe a permutation of an allowed word "magnet").

You will probably find many more exciting pictures related to Feigenbaum's bifurcations in these WAV files. Where do you find the damn private key, however? In the hexadecimal form, it should be some 64 hexadecimal characters, usually starting with 5, or something equivalent. WTUP.YB is probably the most promising song and a hint is a "tree", that's how I understood some erratic "corrections" by the author of the puzzle.

If you find the private key by some extra tricks in those "music" files, and you don't know how to "sweep" a wallet assuming that you know the private key and the public key, let me know. You must do it before everyone else and before May 21st when the wallet will be emptied by the author of the puzzle.

If you use my help above, it would be fair for you to send me 50% of the bounty. Thanks. ;-) You know, I feel that I have already solved a much bigger part of the puzzle than any other human on Earth and it may be 80% of the work needed to get the damn private key. However, it may also be 0.01% of the work who knows. We often face a similar situation in the fundamental layers of high-energy theoretical physics (I mean string theory). Although many insights are flabbergastingly deep, we just don't get how many extra steps of the same complexity or depth are needed to truly unlock the theory of everything.

Of course it's possible that you will have to apply some chaos-theory bifurcation transformations on the pictures that are hiding in the WAV files, too, so the photographs were really just the "layer of the solution" for morons such as your humble correspondent. Who knows. If that's true, then I could believe that the author of the puzzle – who presents the puzzle as fairly simple – might be Satoshi Nakamoto or someone better LOL. Of course, Mitchell Feigenbaum may be Satoshi Nakamoto, too, and all these names may be just aliases of Luboši Nakamotl.

P.S. 1: Another hint: there exists something called Feigenbaum encryption of messages. I am highly uncertain that it is needed to get the damn private key because it's named after Joan, not Mitchell, Feigenbaum. ;-) Study hard and fast.

P.S. 2: The private key is almost certainly determined by a 12-word phrase, one of which is "tree", which are understood by a wallet software such as Exodus or Electrum. Each of these words belongs to the list of 211=2048 words in English. Tree is 1856. Order matters.
Luboš Motl v 8:02 PM
Share