Madmen at Princeton remove Wilson from a school, everything

Burning of the bridges has arrived to universities, Czech media informed us in the morning. The stated reason: "He was a racist", of course. The Wilson's School of Public and International Affairs has to be renamed, a board of unwise fat cats has voted. 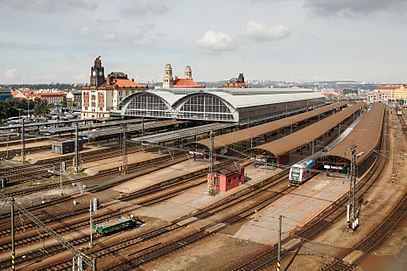 Prague's main train station, the station of president Wilson. The second part of the name was the main name in 1945-1948 and since 1989, it is considered an "honorary name" that is only used during historical and official events.

Needless to say, the school was a perfect match for Wilson's name because he's done a lot to create a modern world based on redefined public and international affairs. While many Republicans may be annoyed that he greatly contributed to the rise of the "Big Government" in the U.S., and I understand how they feel, the Czechoslovak Republicans among us appreciate that Wilson was a de facto co-founder of Czechoslovakia, and that's the main reason why Czechs and Slovaks celebrate him.

At the end of the First World War, he outlined the framework in which Europe should have developed once the war was over. The speech is known as the Fourteen Points from January 1918. The most relevant point for us was the 10th point – he wanted some autonomy for all nations of Austria-Hungary. It was just the beginning of the year. Between January and October, this suggestion exploded in importance and was given very clear shapes.

This simple sentence kickstarted the transformation of Europe from not quite uniform multi-ethnic empires to nation states, something that we consider progress (while the globalists and EU fanatics probably don't). It was the real transition to the modern world that is compatible with the democratic form of government because democracy does require a homogeneous enough "demos" that holds the political power. In some metaphorical political or historical sense, the 20th century only started in 1918.

Our soon-to-be President-Founder (of Czechoslovakia), Prof Thomas Garrigue Masaryk, demonstrated that he was pretty much capable of controlling the units of Czech and Slovak soldiers who abandoned the Austrian-Hungarian army – and should be considered the leader of a state that already exists and that is going to grab a territory soon. Wilson studied history and political science and Masaryk was pretty much a professor of these exact fields and that's why Wilson probably found it natural for Masaryk to become a president. Despite the awkward new name, Czechoslovakia was destined to be the world's history most rapidly recognized new country. Yugoslavia was basically founded a day later as a copycat and other nation states were rising, too.

Rather suddenly, Czechs switched from loyal citizens of Austria-Hungary to a nation that considered it common sense that the restoration of its nation state is a matter of months. During the summer, Slovaks were added to the tentative plan – despite the fact that Slovakia hadn't been in the "same country" as Czechia, except for broader Central European unions such as the Austrian Empire, for 1,000 years. (Between 900-910, our shared Great Moravia dissolved, partly due to internal struggles, partly because the Hungarians were successful in capturing the Slovak part of Great Moravia which they named Upper Hungary.)

The Wilson Bridge at the American Avenue, here in Pilsen. Both have had an incredibly huge number of names throughout the history. The diversity of names shows the comical richness of our modern history.

Before January 1918, Czechs (and Slovaks) were incredibly loyal to the monarchy, the (increasingly humane) efforts to suppress the anti-Habsburg opposition simply succeeded. What changed in 1918? It's hard to say whether Czechs avoided any talk of independence because they really didn't want it (as our great 19th century leader František Palacký's famous quote about the reinvention of Austria indicates); or because they found all such efforts too optimistic and doomed from the start. At any rate, after Wilson's speech and big problems of Austria in the battleground, the new plan became universally accepted (among Czech and Slovak speakers).

Wilson is now labeled a "segregationist" by the extreme leftist ideologues and that's why he is getting this bad treatment. You might say that it's another portion of his personality that they label dark. But you would be wrong. It is actually the same part of his personality and world view that made him important – and that made him the founder of the new order of nation states in Europe (and an ideal person to lend his surname to schools of public and international affairs). Central Europe of nation states such as Czechoslovakia is the same thing as segregation! We usually don't use these words for the border (and separate governments) between Czechs and Austrians or Austrians and Hungarians and Croats etc. but the logic behind the arrangement is isomorphic to the logic that he advocated in the U.S., too. The co-existence of very different peoples just doesn't work well, as the sane observers in the U.S. may testify very clearly these days. Groups of people (such as ethnic nations) can't be sustainably treated as equal if their differences and inequalities are really deep and self-evident; this is a special case of the statement that you can't build a sustainable, functional system based on a big lie. In Wilson's own wise words: "The purpose of these measures was to reduce the friction. It is as far as possible from being a movement against the Negroes. I sincerely believe it to be in their interest."

From this viewpoint, the leftists' attack against Wilson must be taken personally – as an attack against my country (and other European countries), too. Meanwhile, this "burning of the bridges" is hopefully restricted to the U.S. In Czechoslovakia, we have lots of things named after Wilson. Even in the nominative case (which is appropriate for subjects of sentences), the translation of "Wilson's" has three forms, according to genders. So let me segregate (yes!) the things named after him according to gender, too:

And I don't even want to tell you that Bratislava, the current Slovak capital, was proposed to be renamed to The Wilson City (or Vilsonov) a century ago (it was Prešpurk in CZ and Prešporok in SK, from a German name, up to 1919). Another name was chosen there but I guess that now or later in 2020, Czechia and Slovakia will have a greater number of things named after the former U.S. president than the U.S. Isn't it ironic?

Another U.S. president that is facing the fate of Stalin's "vanishing commissar" is Theodore Roosevelt. In Pilsen, we have both his bridge, too (formerly Saxon Bridge) and his street. There are dozens of Roosevelt Streets in Czechia and a square in Teplice.
Luboš Motl v 6:34 AM
Share