On July 10th, Milouš Jakeš (which was his official, somewhat more funny and informally sounding than the commonly publicized, name) died, at age almost 98. He had a secretive funeral and we only learned about the death five days later. He was the last leader of the Communist Party of Czechoslovakia in the communist era. It is interesting to see how my perspectives have evolved – and it is relevant for our comparisons of the communism of the 1980s and the neo-Marxism-driven present. 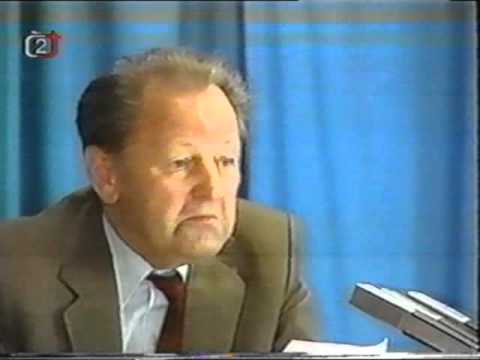 After the 1968 Soviet-led occupation of Czechoslovakia that ended the promising Prague Spring, General Ludvík Svoboda stayed as the president up to 1975. Then both functions of the president and the communist "general secretary" (the latter was really more important, a characteristic sign of totalitarianism) were merged in Gustáv Husák, a Slovak guy who was once given a life in prison by fellow communists for his alleged support of the nationalist capitalism.

Husák was a decent guy from some perspectives – an anti-fascist hero from the Second World War – but he also became the main symbol of the Czechoslovak stagnation after 1968. When Gorbachev took over, his Czechoslovak comrades were clearly less excited about reforms than he was. For the first time in 40 years, the pressure from the Kremlin exerted on my homeland was "away from the hardcore communism".

There was a dramatic meeting of the communist party in December 1987. These guys had to argue about "perestroika" a lot. Almost all of them were somewhat annoyed by perestroika – and all of them pretended that they were perestroika supporters. As far as I can say, the Czechoslovak prime ministers Štrougal and especially Adamec were really the main pro-reform guys in the communist establishment of that time. But they didn't change much. At the 1987 meeting, Husák was ousted as the "general secretary" and Miloš Jakeš took over. Husák remained the "president" but it wasn't too important.

Jakeš has been at the top for less than two years but he became a highly remembered symbol of the late stages of communism, anyway. A trained assembler and electrical plumber (he worked in Baťa's shoe factories between 1937 and 1950), he spoke like a really ordinary man. In July 1989, four months before the Velvet Revolution, he gave the legendary speech at the Little Red Castle (Červený Hrádek) near Pilsen which was addressed to the local communist leaders at the workplaces. The speech (and Jakeš himself) is often nicknamed "The Lonely Fencepost" because he complained that "they", the top communists, remain alone like a lonely fencepost.

The hall in the Little Red Castle is just two miles from my current home and it's the precise place where we had the ball celebrating our high school graduation later in 1992. What was important was that the speech seemed extremely informal and funny and a copy got leaked (some of the commies weren't quite loyal and they correctly recognized that they had a gem in their hands). Like thousands of other people, your humble correspondent – a high school student – acquired a copy of the tape and I spread it to many other people, too. At that time, VHS video tapes already existed; the previous paragraph contains a YouTube copy of that 70-minute-long videotape.

He spoke about the strategies to change the communist management of the society – in some sense, he did support quasi-capitalist reforms at many places – as well as the fight against the dissidents and their new "pamphlet" titled "Several Sentences" (a V2.0 remake of the "2000 Words" petition in 1968). He discussed the salary and physical characteristics of the "nice girl, everything" Hana Zagorová, a top singer, who also signed that anti-communist petition. He confused boilers and broilers. Jakeš recommended to attack "not directly Havel" but "someone else, generally". Our Western Bohemian region was called "here, in Western Slovakia", and there were hundreds of other gems.

As a teenage dissident, I was a real homo politicus and I memorized large portions of that speech; well, I still remember big parts now. A part of the happiness in the fall of communism was about the replacement of primitive guys like Jakeš by the (intellectual) likes of Havel – whom I surely greatly favored in 1989.

When I am listening to his speech today, I still find it entertaining. If I look at it with hindsight or the knowledge that we have today, this was what made him special: he was a natural entertainer of a sort. That was the aspect in which he differed from the typical ultra-boring communist sourballs at the top. (The TV news were extremely boring to watch – full of very formal words such as "The General Secretary of the Communist Party of the Union of the Soviet Socialist Republics..." instead of just "Gorbachev" which were repeated many times in every monologue.) As far as I can can say today, his informal and outspoken approach – and not his stupidity – was what has excited so many of us. His entertaining credentials were what made him a natural transition from communism to capitalism – where entertaining (and passionate) politicians became somewhat more widespread than in the communism of the 1980s (although some democratic-era politicians were and are boring, too). And it wasn't just his skills at entertainment that may be praised. He was really innocently frank in some refreshing way.

In fact, when I evaluate it today, he wasn't really stupid. The speech included lots of slips of the tongue. But this guy had a lot of common sense, like lots of average Czech men of his age (and I guess that he had political skills that surpass that of the average Czech man: but I still prefer politicians who are more clearly above the average intellectually). There are so many things that I agree with today – and in which he looked far more reasonable than the neo-Marxists of the present. For example, he complained about the green campaigners who organized protests in the streets. "But we need them to gather and clean the creek and help instead of organizing protests." Amen to that! He also defended the freedom of the people to buy what they want for their money; even those things are being questioned nowadays.

I didn't expect that some common sense things would be questioned by the new self-anointed avant garde 30+ years later. It seems fair to conclude that even in Summer 1989, I was being manipulated to some extent – e.g. by Radio Free Europe that I was listening on a daily basis. The wars we are fighting today "rhyme" with the history of 1989 but the identity of the two sides is completely different and roughly orthogonal to what it was in the late 1980s.

On one hand, it was natural to think about the possibility that we could have avoided the velvet and we could have heavily punished the likes of Jakeš (he could have been executed, too). They did lots of things, including the invitation of the Soviet and other tanks in 1968 (treason: and yes, some guys had to go to courts several times). On the other hand, they didn't do mass murders in the 1980s anymore and unquestionably evil stuff like that. What was perhaps the most characteristic sign of the disappearing tension between me and Jakeš – an average pensioner peacefully living in a pretty luxurious house where he paid a lot for energy (who was seen once a year during May Day celebrations of the "zombie" communist party) – was his opinion about his namesake, Miloš Zeman, the current Czech president.

OK, Jakeš not only voted for the same Zeman as your humble correspondent twice (in the second round); some of Jakeš' explanations why he was rooting for Zeman were very similar to mine. This is something that I simply have to appreciate. (It is even possible that if he presented some details why it was right to target some Havel allies, I could agree with some of those – although I surely considered myself a Havel ally in 1989.) These agreements have shown how much the political discourse – and the stakes of the political fights – have shifted. Some people are still fighting the conflicts of the 1980s which is pretty stupid. And when I am reminded about the "degree of bullying" that existed when Jakeš was at the top, well, I must say that the bullying by the neo-Marxists in the West of 2020 is already far worse than what we experienced in 1987-1989, during the last two years of communism in Czechoslovakia.
Luboš Motl v 8:12 AM
Share