When a new proposed habit is really voluntary, it will be ignored by most 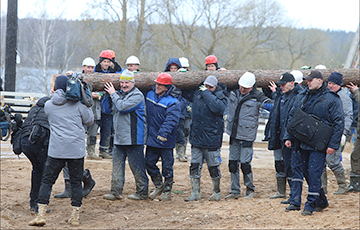 In the previous blog post, among other things, I outlined my proposals to make face masks mandatory in the public interior spaces (and perhaps under other conditions) during the winter flu season, at the places with massive flu outbreaks, in analogy with policies that almost certainly suppressed the spreading of Covid-19 in my country and others. The number of weeks that we spend in the bed with fever may very well drop to a tiny fraction of the current value.

Fer137 protested and argued that instead, such duties (to wear the mask) should be voluntary. The problem is that the bulk of the crazy characteristic behavior of the humans in communism was "voluntary-compulsive" and when it comes to the number of these things, the contemporary America is arguably more Soviet than the Soviet Union ever was. Well, let's start in the Soviet Union, the main communist country during the Cold War era, and look e.g. at the definition of a subbotnik (the picture at the top is relevant):

Subbotnik... was a day of volunteer unpaid work [during the weekends]. Initially they were indeed voluntary but gradually de facto obligatory from announcement, as people quipped, "in a voluntary-compulsive way" (в добровольно-принудительном порядке).

It was really a big part of the totalitarian power, and a huge sign that the civilized rule of law didn't exist, that the powerful could have made things obligatory in a voluntary-compulsive way. People were obliged to say it was voluntary but they were also obliged to do it! The powerful had so much power that they could force the whole population to do something even without writing anything (any law). When they said "something would be nice", it was done! Well, only the time was spent by the enslaved nation; the economic results of these policies were usually poorer than the rulers dreamed.

So in the Soviet Union, lots of people had to voluntarily work in the weekends. Even in Czechoslovakia, we had to attend the voluntary celebrations of the May Day and the November 7th anniversary of the October Revolution. We had to voluntarily fly Soviet flags during these anniversaries and many many other things.

Tell me when it started... But it is obvious that contemporary Northern America and Western Europe is all about these "voluntary-compulsive acts". Lots of things are de iure allowed but they are forbidden. Lots of things are de iure voluntary but they are de facto mandatory. The whole political correctness is based on this principle. According to the U.S. laws, you always had the freedom to use any word such as the N-word. In practice, for many decades, you have been treated just like a criminal if you did so! Thankfully, in Czechia, we really have the freedom of speech so we can say NYGR NYGR NYGR as many times as we want (and if some nasty leftists get a heart attack when they are reading this sentence, it is their health problem, not mine).

Too bad, in recent years, Americans face criminal-like problems not only when they say the N-word. They have problems when they say thousands of other words and their combinations, such as "all lives matter" (a young mother got killed for that last week) or "men and women are the two sexes of a human being". According to the written laws, you may still describe these mundane wisdoms from the kindergarten. In practice, America is ruled by the terror from Stalinists who are perverts at the same moment and who may turn people's lives to hell even under such conditions.

When we talk e.g. about face masks and we want to do some planning assuming a vastly different people's behavior – an overwhelming majority of the people wear a face mask in the movie theater or in the bus, for example – then these masks must clearly be made mandatory. And indeed, with Covid-19 as the justification, they became mandatory in Czechia on March 18th. Formally, this new law was at the level of some executive order by the government. The government could produce lots of such laws more quickly, without the Parliament, because of the state of emergency. But they were generally understood to be mandatory, a consequence of a law at some legal level. I am not a lawyer so I am not terribly interested about the right description of the level. We knew it could be an official recognized problem (leading e.g. to fines) when someone avoided the mask at places where they were required.

With the masks that were actually omnipresent, and surely over 98% of Czechs outside had a mask at the end of March, an approximate peak of this policy, the spreading of the disease switched to the shrinking of the disease, well before the usual peak death rates comparable to 0.05% of the population were reached. Some other nations talked about masks but they were not made mandatory which also means that they were not worn by a majority and they remained a proposal, not a habit that significantly affected the situation in the regions with the Covid epidemics.

What bothers me about the approach of Fer137 – and indeed, it is a nearly omnipresent approach of the Americans today – is that

Sorry: this combination of the assumptions is just impossible. When the words have the usual, undistorted, meaning, and assuming that the rule of law is still present, some new restricting habit's being "voluntary" really means that it will not by done by a majority! If you can assume that it will be done by a majority even though it wasn't done so far, it means that you are assuming that it will become mandatory. There is no other justification for the belief that an annoying new habit such as the face mask will be adopted by mostly everyone.

When something is voluntary, people become hypocritical liars who virtue signal all the time. This inconsistent pattern supports human trash such as the postmodern "environmentalists" who are pretending to save the Earth by screaming about the need to lower CO2 emissions (omnipresent junk science notwithstanding, you can't help the environment by lowering CO2 emissions) but in reality, they are flying in private jets (or the staff of these spoiled brats on the yacht takes intercontinental flights several times). The proliferation of this toxically stinky trash such as the leftists is really a consequence of the society's support for arrangements that are seemingly voluntary but de facto mandatory (only for someone!). We might call these de facto duties "unwritten laws" but this term is a euphemism. Unwritten laws should be reserved for something tha is considered politically neutral in the society. The "unwritten laws" that (mostly) the leftists want to impose on everyone are (or certainly should be) deeply polarizing along the ideological lines. To embrace "unwritten laws" written by your political enemies is political masochism or a political suicide.

Clearly, this part of the society's behavior is much more fatal than any question about a particular type of a flu virus or the face masks. A necessary condition for Americans to defend their civilization against the poisoning by the toxic trash such as the SJWs is that they regain their written freedoms. When they have the freedom of speech, they must actually speak – sufficiently often, to demonstrate that the freedom is real. When they have the freedom not to wear the masks, they must sufficiently often throw away the mask. If some duty isn't written in a law, it is not a duty. If a freedom isn't constrained by another law, it may actually done and it will be done. If Americans don't regain these freedoms that exist on the paper i.e. if they don't restore the agreement between the freedoms envisioned by the laws and the freedoms in their real lives, the human trash that became capable of crippling the freedoms even without explicit regulations will become increasingly powerful and the decay of the society will continue and probably accelerate.