Unlike most countries whose public health authorities were taken over by anti-science leftist ideologues doing very dirty politics, Sweden has chosen a rigorously scientific approach to the Covid-19 contagion.

It has achieved the most beautiful state of herd immunity in the world and its graphs look really organic and nice. Click at the Swedish statistical Covid page and focus on "avlidna per dag" (deaths per day) in the right lower corner. The peak of 115 deaths per day occurred twice, on April 8th and April 15th, and the disease started to drop at that time and the average number of deaths in late August is below 2 per day. These numbers are bound to decrease further. Despite its "no lockdown policy", Sweden already has fewer "cases" and deaths per day (in recent weeks) than Czechia, a country with the same 10+ million people which did a rather draconian shutdown in spring (and has 420 deaths with Covid instead of Sweden's 5800 now). Czechia only paid 2.5% of the extra GDP drop for its unwise lockdown, relatively to Sweden, but the advantages of that lockdown have become clear disadvantages by now. Sweden knows that no substantial restart of the disease is coming; Czechia can't be this sure because the degree of Czechs' immunity is much lower. That's why Swedes may live without fear now and especially in the autumn; Czechs may still have some fear (although most of us don't) and the temptation to lock extra things in October.

OK, Anders Tegnell, the physician in charge of the Swedish response, had to accumulate his knowledge and predictive abilities to quickly make this decision. What people were saying especially in March (and perhaps April) really mattered. I didn't have any responsibility but this was clearly a crisp "physics problem" that I needed to correctly solve within hours or days and I did. Of course the right approach is to do almost nothing, except for some selective protection of the vulnerable. It was clear to me in February, before we had any truly "naturally completed" graphs from any country.

Fine. The August is ending and in about one-half of the world, the spreading of the virus is basically over or at least well after the midtime. We have tons of graphs that vaguely convey the same lesson as the Swedish graphs. "Viruses are going to virus" and it was always really dumb to spend much energy or money to prevent the propagation of a virus that is propagating this easily. You may sacrifice insane amounts of people's comfort and money – like over 20% of the GDP in the U.K. and Spain in Q2 of 2020 – but you will at most get a very unspectacular "delay" in the propagation of the virus, sometimes by days, sometimes by weeks.

Here is a simple Mathematica code and the resulting curve of daily new infections that is generated by this code. OK, the code:

Great. Each cycle in the "For cycle" moves the distribution in the right direction so that the people's viruses are aging. And it calculates the new infections as the arithmetic average of the infected people on the 2nd, 3rd, 4th, 5th day... multiplied by r0 and by the ratio of the population that is still non-immune (you can only infect people without immunity so the "r0", the number of people whom you will infect, has to be multiplied by the ratio or the probability that the person next to you still lacks the immunity). This number of new cases is inserted to the distribution "d" as the new "1st day patients" (2nd entry in the array). The pool of "0th day (non-immune) future patients" is lowered by the same amount. 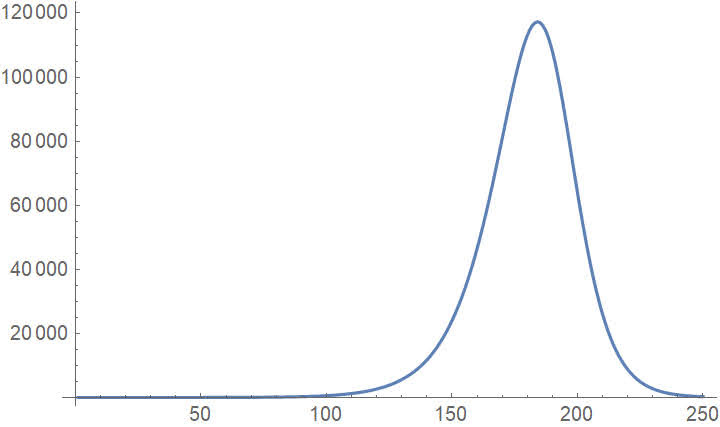 The history of these daily new infections is remembered in the "dailycases" array and these numbers are plotted at the end. With the choice of "r0=1.3" (this is not exactly the same "r0" as the normal one but it has the same effect), I obtain the graph above. OK, with the modest number of "one" initial infection, it took over 160 days to reach one-half of the maximum daily cases and 180 days to reach the maximum (the slow rise at the beginning was sped up in reality because Sweden got many more seeds than 1 at the beginning). The width of the curve at the "half weight" is about 40 days which is what I was really adjusting to roughly agree with the actual Swedish graph. Five million (50%) of Swedes get the immunity at the end, in my choice of parameters.

Otherwise you get some curve that is going up quasi-exponentially at the beginning; and that starts to drop at the end, also quasi-exponentially but with a different halving period. There are various complications you may add to the code. Many of the elementary changes won't matter much e.g. "at what days the positive people are contagious". The effect of these minor changes may be rather accurately imprinted in the single parameter "r0". You should adjust this single adjustable parameter (which I called "r0" but again, it's not the normal one) in order to get the right timescales at the x-axis. Otherwise the behavior is almost universal.

As far as I can say, the most important complication that actually needs to be there for the code above to become realistic is to allow a variable "r0" for different portions of the population which I discussed on April 13th (click). In particular, this has the effect of including some regions of Sweden where the disease was never growing; and other regions where it was just "marginally growing" and regions where it may be dropping very slowly. The latter group has the effect of making the later graph parameterically slower than the graph above. You should play with these options.

At any rate, it is absolutely unquestionable that the only possible reason why the disease stopped in Sweden (but also Lombardy, almost all of Europe, the Amazon forest, and tons of other places where the fatalities were comparable to 0.1% of the population) is that the disease has hit the limits, it has run out of the vulnerable people because of herd immunity. In other words, it is the factor "d[[1]]/(d[[1]] + d[[-1]])" in my code that is absolutely needed for the increasing curves to slow down.

All people who are "capable" of telling you that Sweden has tamed the infection and it's dropping now because the people are "more careful than in March and April" are just flabbergastingly stupid. When someone is this stupid even in late August 2020 (!) and adds some whining to tell you that he will cry if you just point out that he is flabbergastingly stupid, he or she becomes insufferably toxic. Nothing good can come out of the nurturing of these people.

The claim that the Swedes are more careful and "meeting less often" in August than they were in March or April is just absolutely detached from reality. The Swedish economy still dropped by over 8% between Q2 of 2019 and Q2 of 2020. In that Q2 of 2020 quarter, despite the wise absence of centrally imposed restrictions, Swedes were still behaving in a "careful way" and that's why their economy was suffering. The borders were almost closed, too. But the disease was growing, and very clearly so.

Now the Swedes have almost completely returned to their normal lives, the borders are almost open, and the economy is basically back to the pre-Covid conditions, too, but the disease was self-evidently shrinking. There just isn't another effect that may turn the dramatic increase from March and early April to the dramatic decrease from July and August... than herd immunity i.e. the factor of "d[[1]]/(d[[1]] + d[[-1]])" in my code. For example, the warm summer weather plays some effect but most infections occur in buildings (especially families and hospitals) so the UV rays outside can only bring you this far. If you're mathematically illiterate and truly unable to reach this conclusions, you should shut up. You shouldn't talk about Covid, about epidemiology, about biology, or about any other question in the Universe that depends on "at least a rudimentary level of quantitative reasoning" because you just don't have any. You're a fucking unlimited idiot, a child who was totally left behind, an obnoxious imbecile who doesn't see a herd immunity graph even if he looks at a polished, textbook example of one.

Imbeciles like you have robbed mankind of tens of trillions of dollars in 2020. You may proudly estimate how many people like you, N, have helped to establish these insane policies in most of the Western countries. Divide tens of trillions of dollars by N and you will get an amount of money, the magnitude of damages that you have caused. For 99.999% of you, it's clearly incomparably more money than the market price of your fudging stupid life. The real problem is that the disease is already over, everything that could have been screwed has been screwed. There won't really be any "truly new" proofs that Tegnell and those of us who were quickly on his side was right. If you can't get it by now, you will probably never get it, you will be a fudging insane idiot forever. If you keep on obfuscating the herd immunity in Sweden in September and perhaps also October etc., you will clearly be a conspiracy theorist on par with those who don't believe that there were men on the Moon.
Luboš Motl v 6:35 AM
Share