Lidl CZ is 10+ years ahead of other supermarket chains 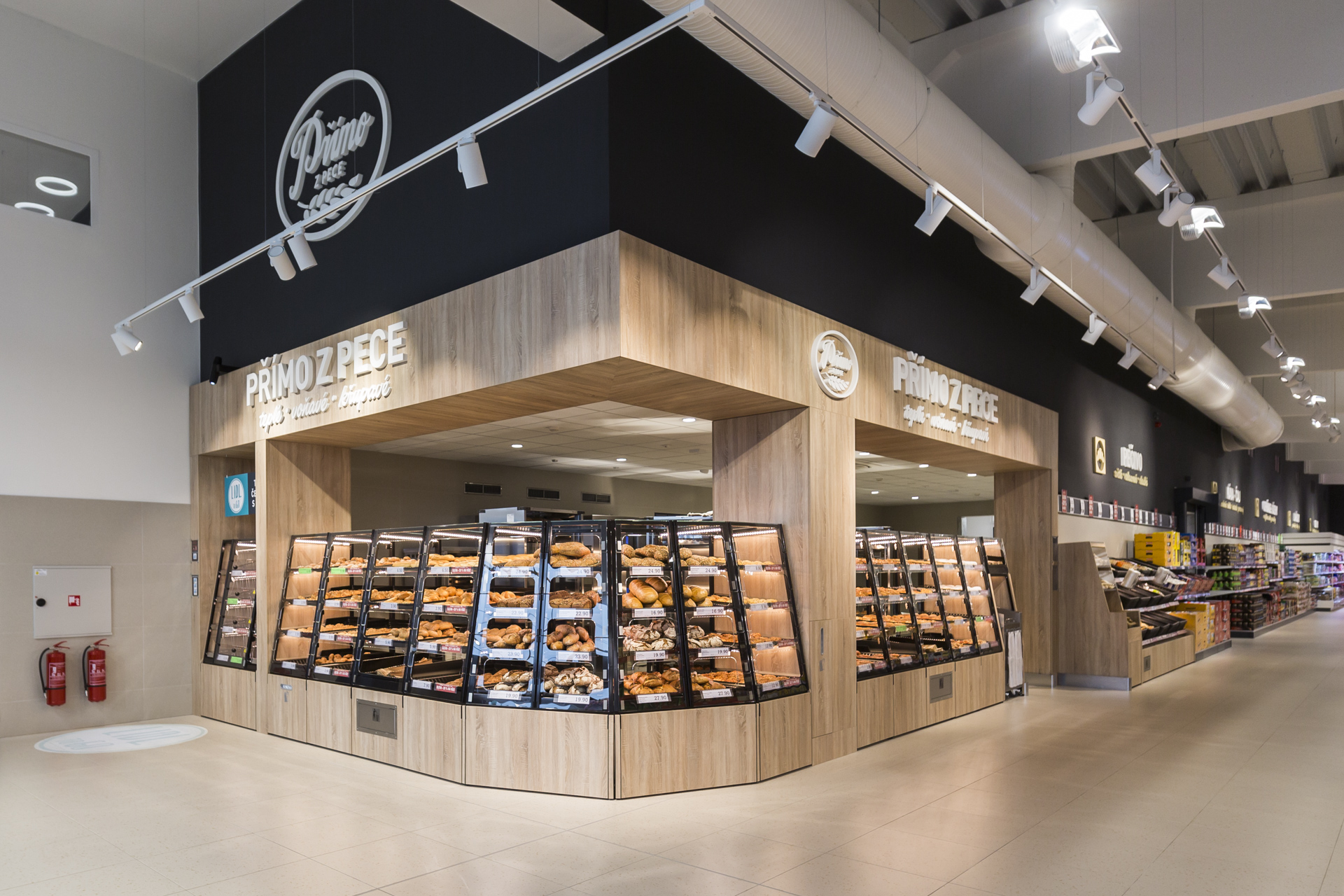 In Beroun, a town between Prague and Pilsen, they had opened a "new generation store" already in 2015 (which recently was and probably still is the largest Lidl store in Central Europe). Now in 2020, our local Pilsner-Doubravka store got upgraded to a similar if not identical "new generation" and it really makes a difference.

Dieter Schwarz (*1939), a German Jew, is the 3rd wealthiest German ($18 billion or so) and the owner of the Lidl and Kaufland chains. The local Lidl has been my grocery store of choice since its birth almost a decade ago. I have believed that they were ahead of others. But minutes ago, I returned from that store after an 8-day-long reconstruction and expansion (Friday-to-Friday, August 14-21; I had to go to a Norma once and Coop twice, not too pleasant); it was far from the first expansion of that shop. And I am just impressed.

Lidl is currently a decade ahead of the competing chains. The difference is literally comparable to the difference between the capitalist grocery stores and communist grocery stores in the 1980s. I am stunned. My visits to the other stores are often unpleasant, products are missing, most things are 30% more expensive, employees are slow, they chat with friends and ignore consumers, long lines, and so on.

Everything seems adjusted and perfect at Lidl. There's a lot of room there, products are logically sorted (the arrangement got changed today but I have mostly understood and memorized the new one after one visit). The shelves are tall, robust, often covered by chrome, the products stay there. Meals that should be kept at 0-5 °C are kept at this temperature (unlike Coop where the microwave-ready meals were kept at 15-20 °C).

Lidl got some negative publicity on this blog because their fliers have sported a black model which many Czechs were offended by (because it looked like a part of the intentionally organized invasion of exotic aliens to Europe; of course I don't mind myself but I surely think it's right that these people may still freely express their anger); and the Santorini churches had their Christian crosses edited once or twice (I was worried about that, too). But these are tiny aspects of the fliers. There are hundreds or a thousand of products featured in each weekly flier so the "black model and removed crosses" are a matter of severe cherry-picking. I guess that some Germans didn't understand what is politically correct in Czechia; the censorship of churches and a black man pretending to show you how you look in some clothes are simply not politically correct in Czechia.

However, Schwarz clearly has enough money to do things right. Carts are often blocking each other in grocery stores and it may get frustrating. So this wasn't the first expansion that made the available space in the corridor larger. Now, you still need the products to be within a sufficiently compact area. There's a dimension that helps you to achieve it: the vertical one. So the shelves at Lidl have been getting taller and they host lots of things in long vertical columns. This is clearly the right way to go. Are there too many people concentrated around some product(s) in one place of the store? Well, in that case, the products in that part must be spread horizontally to a larger area!

Now, lines in front of a cashier may be extremely frustrating. Such a frustration is a rule, not an exception, in most other supermarket chains. Ten minutes of waiting is common in Albert, for example. Lidl's employees have the headphones and the supermarket-wide radio that calls the employees to the cash register 1,2,3,4,5 or 6. The cash registers are being opened and closed dynamically, employees arrive and leave, and they very quickly react to the length of the lines everywhere. This management of the "length of the lines" seems absolutely essential to me.

The price stickers are standardized, nicely printed, and clean. I would still like arrows on the stickers to understand that they described the products beneath them and not above them because this has gotten confused me X times in my career of a shopper. ;-) Products don't spontaneously fall off the shelves. The weekly themes are lots of fun, with all the Spanish, Italian, American, Asian, Mexican, Alpine, Retro, XXL, Barbeque... weeks.

Last but not least, the employees are expected to be skillful and professional. There seems to be a clear threshold that is required at Lidl, something that seems absent almost everywhere. The Lidl cashiers are more capable of moving and registering the price of the products than others. They don't constantly waste their time by chatting with some friends who have arrived. The customers have a higher priority. In many other chains, it often looks to me that "this employee is only pleasant enough for some small subset of customers, like obnoxious fat ladies-losers". This just isn't a feeling I have ever had in Lidl.

Some other chains (Globus) have the "modern" method that you can register the products in your cart yourself. I find it a complex procedure opening lots of question marks. But at the end, I think it's a dead end in the evolution of stores, for a simple reason: the customer is much slower in doing these things than a professional. It may be by a factor of three or more. And the customer's time ultimately costs money, too. When a customer finds the experience in a store "slow", he will effectively count it as an extra price that he has to pay. That's why there simply is a very good reason to keep human employees who do these things quickly and get reasonably paid for that – because they can do lots of such work per minute, indeed. (Maybe robots with AI are coming: Has someone created a viable artificial cashier?) From the viewpoint of the whole, it's simply better when a fast Lidl employee does the task that the regular customer like me would do much more slowly. It's the whole that saves the time, the whole is what matters, and time is money!

I am comparing Lidl with the following competing chains that survived in Czechia as of now: Norma, Coop (former community Jednota=Unity), Tesco, Albert, Penny, and partly Kaufland, Interspar, and perhaps Billa and Globus. (There's no Aldi in Czechia.) The "advantage Lidl" looks absolutely self-evident to me. And I think it must be true, they must be selling an increasing fraction of the food products. It's curious that this isn't being discussed by the regular people and the media. Note that since the fall of communism, some chains have already shut their business in Czechia – Carrefour and Delvita, for example (these two were mostly taken by Tesco and Billa, respectively).

Some chains must be seeing a serious decrease of the amount of stuff they sell. So they must increase the prices to compensate for the decrease of quantity (they still have to pay the employees etc.) which further decreases the demand and it's a vicious circle often leading to the closure. Lidl seems like the clear survivor for a very long time. The other chains must believe that they will survive with higher prices and smaller volumes but I think it is ultimately an extremely bad business strategy. It is just wrong in capitalism to employ people who aren't utilized throughout most of their working hours. It's wrong not care about what actually annoys the customers (such as collisions of carts or waiting). At the end, all these (not so carefully) hidden expenses manifest themselves in the financial results and/or the survival of a business.

I believe that this is the "ultimate truth" in almost all industries. In particular, any "cheap brand" of cars such as Škoda may start to produce products that look luxurious (and Škoda has indeed moved from a cheaper competitor of VW to a counterpart of Audi, Volvo, if not a BMW). The lower price always matters and any company with big enough volumes is capable of increasing its premium feel and improve the wow factor of its brand, after all. Some brands are relying on their being "permanently premium" and they may soon be shown (and maybe they're already being shown) how myopic and wrong such an arrogant attitude is.

Bonus: In a new and insightful 24-minute-long video, Jennifer, an L.A. expat living in Prague since 2012, explains some differences between the Czechs and Americans, their quality of life, and the access to beer, social life, health care, culture, beauty, and satisfaction. Spoilers: L.A. sucks, Prague just works and it is fun. You know, Czechia will only be "clearly ahead" of the Cold-War-era West once there is a significant migration, brain drift, immigration of lots of people like Jennifer here. But it may happen damn soon, the Czech currency may strengthen two-fold within a year or a few years as well, and "who is ahead" may have the opposite answer than during the Cold War sooner than almost everyone thinks now.
Luboš Motl v 8:14 AM
Share