Willie Soon sent me a link to a critical comment about an incredible article by David Morens and Anthony Fauci:

Emerging Pandemic Diseases: How We Got to COVID-19 (Cell)

Aside from some generic Covid-19 hysteria which has crippled millions of other brains as well, these two authors promote a rather hardcore version of an older, Gaia religion. It really looks like these two men have completely lost it.

Search for the words "extreme" and "harmony" in the article to obtain some of the most characteristic examples of "ideas" that are actually driving them.

...In addition to these established infections, new infectious diseases periodically emerge. In extreme cases they may cause pandemics such as COVID-19...

The problem is that there is nothing extreme about the SARS-CoV-2 virus; and there has never been any pandemic of Covid-19. When it comes to its impact on mankind, this disease is effectively just another strain of flu. It's visible e.g. if you look at the Czech data. For example, yesterday we got 798 new people with a positive test (a new daily record), out of 10798 tests (near records above 11k+). However, the deaths with Covid remain at ~1.5 per day. It is spectacularly clear that most of the "positive" people are being overlooked by the PCR tests because the percentage of positive cases is almost insensitive to the amount of testing. But 1.5 deaths per 800 "cases" suggests a 0.19% case fatality rate. The real one is below 0.1% because 1) surely more than 50% of infected people are overlooked, 2) more than 50% of the recorded "deaths with Covid" actually have other causes of death.

Pandemic is defined as an epidemic that has spread over a large region. It is clear that there has never been a pandemic of Covid-19. Countries like mine have always been and still remain very far from an epidemic. For flu-like diseases, an epidemic starts at 1800 positive cases per 100,000 people. We have something like 50 positive cases of Covid per 100,000 people. The large Western European countries reached levels that were 10-20 times higher than the Czech ones but they were still not sufficient for an epidemic. Because there was no epidemic in the large majority of any continent, there hasn't been a pandemic and the claims about a pandemic were an example of an atrocious abuse of scientific institutions by dishonest far left activists.

On Page 1089, you find the remaining references to "extreme" things and "harmony":

...There are many examples where disease emergences reflect our increasing inability to live in harmony with nature. Nipah virus emergence followed agricultural burning of forest...

...Living in greater harmony with nature will require changes in human behavior as well as other radical changes that may take decades to achieve: rebuilding the infrastructures of human existence, from cities to homes to workplaces, ...

...It should force us to begin to think in earnest and collectively about living in more thoughtful and creative harmony with nature...

A big part of the article contains these stunning far left declarations. They keep on repeating because the authors must share the belief that a lie repeated 200 times becomes the truth. All humans need to become hippies of a sort who are high, who need to destroy the civilization as it has existed, and to achieve harmony with nature.

The truth is that this whole reasoning is 100% unscientific gibberish copied from some of the most naive children. The main problem is that "nature" is ill-defined and the authors are imagining "nature" that has never existed and cannot sustainably exist. Well, the first important secret is that the humans and their civilization are a part of nature, whatever we do, and whatever we do, we are still subject to the laws of nature! Why? Because the laws of nature still mean the laws of physics and they are absolutely universal and unstoppable. Also, human species are just another species that belong to the tree of life.

If you don't care that you are already leaving the logic of science, you may try to define "nature" as the world minus the "artificial" things that were added or changed by humans (and perhaps minus humans themselves). But there is no well-defined way to separate these two parts. Since their beginning a few million years ago (but especially since the rise of civilizations some 6000 years ago), humans were altering their environment and all other life forms had to adapt to the environment that was partly shaped by our human species. 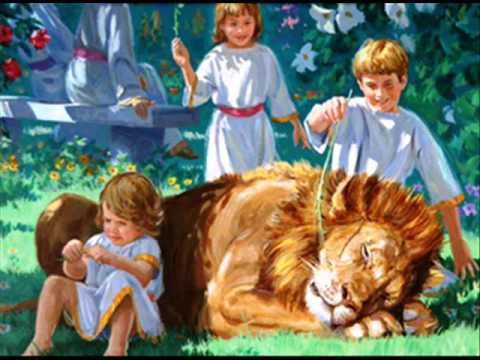 Even if you separated "nature" from the "human artificial additions", it is nonsensical to talk about "harmony". Life on Earth, the key part of what we actually mean by "nature" in the normal speech, has always been about the struggle for survival. Children of all animals were taught: "Either eat some other organisms, or starve to death. Either run away, or be eaten by someone else." The picture of the paradise above is a traditional commercial promoting Jehovah's Witnesses whom you might call "religious rightwingers". However, in reality, this sort of thinking about "harmony with nature" is much more widespread among the leftists (and usually self-described atheists) – leftists like Morens and Fauci.

Nature has never worked in this way and it can't really work in this way. A lion needs to eat something. He would probably agree that the kids around him are a yummy breakfast. These instinctive desires always create (and have always created) tensions and pain. Species try to become as influential as they can – and humans got pretty far in this enterprise. But even if you embraced some "lions who eat a buffalo" as a part of your "harmony in nature" and if you defended some "stationary state", it's still not how nature has worked. A necessary condition for the evolution of advanced life forms such as mammals was the fact that the life on Earth hasn't been stationary even in the long-term sense. Even the repeated patterns – a lion eating about XY other animals per month – has been repeatedly and systematically violated by some unusual events.

Without this perturbation of the (otherwise) stationary state, there would be stagnation. There would be no progress in nature. There wouldn't be any advanced life forms (above the level that was achieved when the stagnation began). So Gaia cultists like Morens and Fauci are clearly throwing the baby out with the bath water. They are dismissing the main secret of life on Earth, the main driving power that has allowed the blue, not green, planet to be much more impressive than other planets we know so far.

You can also define "harmony with nature" in some old-fashioned sense of the 1980s – the fight against real air pollution, the preservation of biodiversity, and a few other things. In all these tangible respects, mankind (and especially the Westerners) of 2020 live in a far greater harmony with Nature than the previous generations did some 20-60 years ago. Everything is so much cleaner, including the air and rivers. Species that were often said to be on the verge of extinction are returning. I actually know it because I spend a lot of time in the "actual nature", either the "almost virgin nature" or the "somewhat cultivated nature" with a lot of species that aren't really important for the "human economy". So I know how much better things have gotten in recent decades. And so do all the rural folks.

The likes of Morens and Fauci – extreme urban leftists – don't know anything of the sort. They have internalized a totally untrue romantic ideology about the nature outside their cities (which they have almost never left) which is completely dying and struggling and which requires humans to be exterminated or at least hugely tamed. But nothing like that exists. Nature in the truly universal sense will also be around; nature in the narrower sense (which has several levels, as I sketched) is doing fine.

It's plausible that Fauci has understood something about diseases in the past. Maybe he was even a good scientist in general. But now he is just another dumb, naive, childish left-wing ideologue spreading memes that brutally contradict the very basic pillars of the scientific understanding of nature – which includes the fact that the human species is just another species of organisms (and animals, vertebrates, mammals, and primates). Someone who creates the illusion that "humans have nothing to do with nature" is scientifically returning to the dark past by several thousand years. Yet, crackpots of this kind are often promoted as "scientists" because lying and stupid biological junk has overtaken a majority of the Western media.

We could comment on the other particular ideas by Morens and Fauci. Nature is doing "extreme backlashes" because we sinned against some environmentalist commandments. Oh, really? Is that possible? This is really just a green reincarnation of God who punishes the humans for sins against His commandments. But nothing like that exists in nature. Quite generally, the stronger a species becomes, the harder for other species it becomes for the weaker species to create problems for the stronger species. If some virus appeared after some wave of deforestation, it surely doesn't mean that the virus emerged because of the wave of deforestation. And even if a similar attribution of the "nature's backlash" to the "human deeds" were correct in some other situations, there is no reason to say that the unusual event was a "bad thing". Nature and science don't really distinguish "good and bad things". "Good and bad things" are just subjective human labels that always depend on the human interests, either material or aesthetic interests or (as in this case) ideological interests.

Correlation (let alone coincidence) doesn't prove causation. There isn't any good mechanism that could increase the probability of emergence of unusual viruses in wild nature whose area has shrunk. Similarly, there isn't a way how new bat-related viruses could emerge because China emits CO2 and other things through its chimneys (or Asia throws a huge amount of truly disgusting plastic bags to the ocean). The evolution and the dynamics of life, including the viral activities in this case, doesn't measure the "number of sins by humans" in order to "create punishment". Justice of this sort just doesn't exist in nature, almost all pairs of phenomena that look like "two largely separated realms" are indeed "two largely separated realms", and if some justice exists as an emergent phenomenon, it surely doesn't obey the naive "laws" written down by childish yet radical green leftists.

Let's try to make our environments clean – I am doing a lot in this direction – but let's realize that all the "more radical" additions about "how mankind needs to change" are just pseudoscientific delusions driven by the extreme left-wing ideology. Every nation that succumbs to this toxic garbage will deteriorate, along with its natural ecosystems.
Luboš Motl v 7:23 AM
Share