AOC is just a joke

Capitalism beats socialism for many reasons; one of them is that it manages to assign the people to the right places. The invisible hand of the free markets does much of the job. In socialism, e.g. in the conditions that exist internally in the Democratic Party, the processes are different. Consider a hypothetical deadbeat, retarded bartender who spills every other glass of wine. What do the two systems do with such a job market commodity? In capitalism, the bartender is fired and the former employee may recommend her a new job. Perhaps she is more talented in cleaning the toilets. 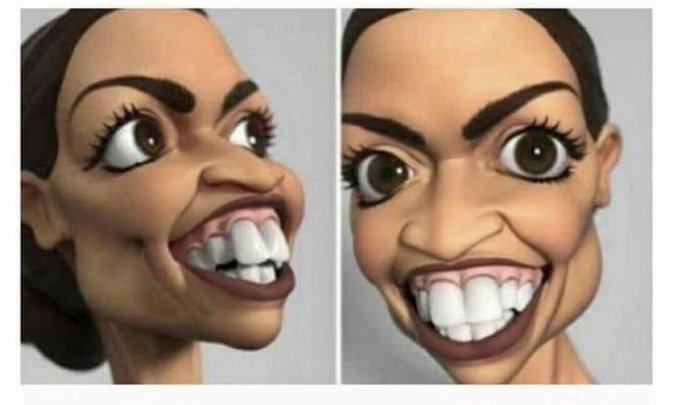 In socialism, it's different because the bartender has done something for someone who is ideologically influential within the regime (such a circumstance is unlikely to emerge in proper capitalism); and they simply need to pick someone "intersectional" for ideological reasons (in capitalism, quotas and duties of this kind just don't exist). So she just can't be downgraded to a toilet cleaner. Instead, why don't we turn her into a politician? She gets a highly troubled district of New York where the average IQ is close to 80 and where a doorknob would be elected if there were socialist stickers on it. By the triangle inequality, a bartender who is dumb as a doorknob must be elected, too, serving as an excelent example of the consequences of the arrangement in which literally everyone can vote. Well, if everyone can vote, the representative democracy guarantees that literally everyone can be a lawmaker, too. To make things even better, Twitter has donated millions of followers to this "lady".

Meanwhile, in the real world, consider a lawmaker from Bronx and Queens who proposes the following:

Is anyone archiving these Trump sycophants for when they try to downplay or deny their complicity in the future? I foresee decent probability of many deleted Tweets, writings, photos in the future


To one extent or another, the goal is to liquidate the careers and the material well-being of approximately 1/2 of citizens of the world's only superpower – through various befriended whining far left psychopaths who can initiate their own mental meltdown anywhere in the U.S. (the meltdown is the only skill that they have mastered) and prevent an employer (who doesn't want to listen to hysterical animals for too long) from hiring someone etc. Maybe she doesn't dream of murdering them in the Gulag yet. But she surely wants them to be miserable. In other words, maybe she doesn't quite plan Stalin's purges of the 1930s but she surely plans blacklists of the communist Europe of the 1970s or so. Incidentally, in the 1980s which I remember from my childhood, the existence of blacklists could no longer be publicly admitted in the communist Czechoslovakia. Such lists existed but the communists already knew that they should have been ashamed of this "technique" and weren't ever bragging about them.

The idea that this pathetic individual who was turned into a "politician" as an affirmative action hire can credibly threaten all the pro-Trump people, including about 1/2 of sitting judges (who were really listed on the so-called Trump Accountability Project, also run by pretty influential people from the Obama-and-Hillary environment: the names-for-a-hit-list-collecting website is considered a phishing website by the Czech AVG antivirus software), seems ludicrous to me, especially now when it is not even clear who will be the president in 2020-2024. (AP and some others declared Biden a winner minutes ago, I am not ignoring it – although I think it's been a coup built on fraud – but given the lawsuits, the decision making is clearly far from over.) Most of the 30,000 commenters at Breitbart beg her to include them into the list. Every 5 seconds or so, someone mentions the AOC list and be sure that almost everyone is against AOC.

A lazy bartender is unlikely to have enough patience to write down the names of these (and tens of millions of other) people.

If she constructed the list properly (and included all the folks from the huge Trump rallies in the recent weeks), she would find out that there are about 180 million Trump supporters in the U.S. (the file would have gigabytes in the uncompressed form) and Trump has therefore clearly won the election. And note, AOC, these people aren't erasing any tweets. Almost all of them are still supporting Trump and most of those who aren't brain-dead almost certainly always will. If you have a psychological problem with that fact, you will have to address it with your psychiatrist; elections are not a good enough cure for your mental illness.

The construction of such hit lists is an attempt to plagiarize the Nazi and communist playbooks. But there is a problem for AOC: When two are doing the same, it is not the same. I think that she has virtually no power to achieve her sick fantasies. Before such ambitious policies were adopted by the primary independent nations such as Nazi Germany, the Soviet Union, and the communist China, there had to be some fundamental changes and violent interactions that the evil side had to win. In Russia, the Bolshevik comrades of AOC had to win a civil war. The rise of Nazism and the Chinese cultural revolution weren't quite "civil wars" but they were still profound changes of the society that went well beyond the victory in some elections (especially a totally unconvincing and arguably fraudulent victory just isn't enough for such deep changes) and that depended on a huge amount of brute force – something that a would-be politician hired through affirmative action simply doesn't have. Most importantly, all the evil regimes that could credibly enforce their hit lists had to disarm the opposition before they started to "peacefully" harm the entries on their lists. AOC, you have forgotten to disarm the people on your list before you started to threaten them. I think that it is another sign of your immense stupidity. The Second Amendment was written exactly for the hypothetical situation in which someone who got too much power was threatening the well-being of millions of law-abiding Americans; his or her remaining life expectancy shrinks by orders of magnitude as it should.

So I am greatly afraid of the possible evolution in the U.S. but I am not sufficiently afraid to take a staggering moron such as AOC seriously. Everyone who takes her seriously as a politician is an imbecile and she simply doesn't have the power to threaten the jobs of the sitting judges and all the other people in her sick list. It is much more likely that this moron will hurt herself – which will be partly the Democratic Party's apparatchiks' fault, the fault of the people who arrange jobs for someone who is clearly not up to that job. But it's more worrisome that no well-known Democratic Party politician has had the decency to apologize for the existence of a batshit crazy creature like AOC in his or her party. This is the level of the transformation of the Democratic Party that is actually worrisome. The generic leftists won't quite cooperate in insane projects such as AOC's lists. But they may be expected to do something "slightly less spectacular" which is still utterly incompatible with the values that the United States of America have depended upon since 1776.

A typical nice dude in a good shape who accepts the Bolsheviks' plans with a smile and who wants to be held accountable for his "crimes". See Styx, a famous influencer, who reacted similarly. Alex Christoforou is more worried about these neo-Bolsheviks.
Luboš Motl v 4:37 PM
Share