Robbert Dijkgraaf and the end of pure science

OK, Albert Einstein found most of his deep ideas in Ulm, Bern, Zurich, Prague, and Berlin, but most people associate him with Princeton, New Jersey, where he was employed as an older man who was already famous but no longer too explosively original (imagine: Princeton gets almost all the credit while Prague where Einstein realized that he needed a theory with the equivalence principle gets almost no credit). The NJ employer was the Institute for Advanced Studies (IAS) and for a few years, Robbert Dijkgraaf was the director of the IAS. Dijkgraaf is my fellow co-father of screwing/matrix string theory (Dijkgraaf is the biologically non-identical twin in the Verlinde triplet, as Susskind has pointed out) and a co-author of a small paper of ours. 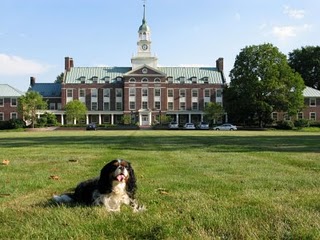 Fine, he just wrote an essay for the Quanta Magazine,

Contemplating the End of Physics.

He says that physics isn't ending but some of his detailed argumentation sounds very similar to the – intellectually incompetent and impotent – pseudointellectuals who have talked about ludicrous concepts such as "the end of physics" for decades. Before we get to some content, I must say to Robbert that if he is "contemplating" the end of physics, he should also be "contemplating" his moral duty to return all the salaries and grants he has received in Amsterdam and Princeton because he was hired to manage physics and drive it to progress, not to end it! Quite generally, I find it stunning for people to "contemplate the end of physics" and similar things when they are paid huge salaries for "doing physics" instead. These two should be totally incompatible, shouldn't they?

Fine. Dijkgraaf writes down two main ideas "why physics isn't over". First, as I wrote two weeks ago, state-of-the-art theoretical physics as of 2020 isn't just about the discovery of the new particles, something within the pre-existing framework of de facto perturbative quantum field theory. Physics is also about the much more general and innovative ideas outside the box of perturbative quantum field theory or outside any quantum field theory (it is the effort to find and increasingly understand the new frameworks outside the QFT box and the relationships between them) and Dijkgraaf believes that we only know a small part of the important ideas in this category. We're just getting started, he claims.

Well, I tend to believe that we already know a sizeable fraction of these "fundamental physics beyond QFT" ideas as well but none of us has any proof in one way or another. So far so good.

The second major part of Dijkgraaf's argumentation is that only now, physics (and science) is getting truly interesting because we're no longer just describing pre-existing things carved by Mother Nature. We are constructing and engineering new things – new species in genetic engineering, artificial intelligence, and new Universes out of string compactifications may be three very different examples that nevertheless share a trait – and that's finally similar to Columbus' ability to sail a ship away from the European beaches towards the New World, if I add some layers of creativity to Robbert's text and if I remove some redundant copies of the claims. ;-)

Fine, I agree with those explicitly written things as well. If I wanted to express a nearly equivalent meme differently, I would say that some decades ago, the world class theoretical physics has really switched from "the focus on particular observations and the invention of ad hoc hypotheses (picked from an infinite and misunderstood pool of candidates) that may explain them" to the "industry of mapping all mathematically possible theories and deciding which of them are consistent and useful for explanation of existing and new things, by deducing their consequences".

Indeed, I think that a good theoretical high-energy physicist of 2020 works as a geographer who maintains a "map" of all categories of mathematically formulated laws encoding physical theories (and their categories) in his or her or its or xir or their head (add 17 more pronouns, 30 genders went extinct due to Covid) and who has an idea what follows from each (including the relationships between them). Of course, no one knows the "complete map of mathematically possible or interesting theories" – we only know those that have been discovered or constructed by ourselves and others so far (and the set is really infinite and we can only achieve a finite fraction of understanding if we assign a measure to the ideas that favor the more fundamental ones) – but it is nevertheless a very powerful approach to have this "incomplete map" in our mind and to use it as a starting point of our very thinking about Nature. The explorers of the post-Columbus era also had the expertise of knowing the oceans and what to expect and how to behave there – you couldn't be a good explorer without that and you can't be a good theoretical physicist without a similar knowledge about the "map of known of theories and ideas" including the "dragons that are reasonably expected in the uncharted waters".

When it comes to these ideas, I think that my reasoning is rather close to Dijkgraaf's. But he seems almost completely detached from the propaganda about physics that has filled most of the media and similar platforms (and would-be platforms that are actually not platforms) in recent years. At the end, what is happening in the society is the systematic slinging of mud on physics – and other pillars of the Western civilization. So when Dijkgraaf asks "Maybe physics has run out of original ideas?", he seems to overlook the fact that whether or not an idea is called "original" or "interesting" depends on a subjective evaluation and there is a whole movement that wants to dogmatically classify all ideas in physics of the recent 50 years or so (and perhaps all ideas underlying the Western civilization) to be bad, uninteresting, unoriginal, useless, or otherwise bad.

This ongoing "cultural revolution" is the primary event that is deciding about the rate of progress in the human race's understanding of physics and I think that Dijkgraaf isn't really doing anything against the forces that want this progress to slow down. He isn't really explaining why lots of original, essential, and interesting ideas were found in the recent 50 years or even 20 years. The whole discussion about "the end of physics" would be totally idiotic even if physics could be assumed to be just a classification of elementary particles within a simple QFT framework. Why? Because we only know the particle species up to the \(13\TeV\) collision energy of the LHC. The rest of the path between this energy and the Planck energy \(10^{19}\GeV\) remains unknown which is a simple reason why physics is far from ending.

There are various approaches to find out what is behind the "currently understood frontier" – both experimental and theoretical approaches and their clever combinations. The purely experimental approaches involve "greater LHC-like gadgets" but also possible new, cheaper ways to accelerate as well as completely different, new kinds of experiments. But much of the wisdom about the experimentally inaccessible realm may be and has been determined by pure thought (like our understanding of quantum mechanics of black holes). A problem may be that further progress may look difficult or too expensive (the latter is especially relevant in experimental physics and the brute force approach to it). But it is possible and when the goal looks grander, it really compensates the discouragement by something else, a metaphysical thirst. The Planck energy is very far from the LHC energy which makes the Planck energy analogous to "God" or something similarly big. Indeed, I think that my desire to fully understand the particle spectrum and associated rules all the way through the Planck scale and beyond is analogous to the religious instincts. There is nothing wrong about it.

Dijkgraaf picks the artificial intelligence and genetic engineering as the "constructive hot fields" of the present, seemingly assuming that the reader actually assumes that those are hotter than old-fashioned physics now. Fine, of course, lots of talented people are working in those fields now. But make no mistake about it: it is the "constructive" aspect of these fields that makes them less fundamental, less metaphysically attractive. They are really fields of engineering. After all, genetic engineering is called an engineering. Biochemistry of drugs is mostly about their "synthesis", another "constructive job". Most of the people who study them don't study them because of their curiosity; they study them because of the applications that may lead to a profit. It's an entirely different set of priorities. I, for one, will never be as excited about engineering as I am about pure, curiosity-driven science. What is actually happening is a war on curiosity. Efforts by a movement to delegitimize curiosity itself. Of course they know it is possible to build a \(100\TeV\) collider. Instead, their claim is that mankind shouldn't do such things because their getting money for doing nothing (or for performing pure destruction) is a better way to spend the money and time than the curiosity about the fundamental laws of Nature. That movement must be defeated and I am afraid that as a New Jersey-based commander-in-chief, Dijkgraaf isn't doing much to defeat that movement.