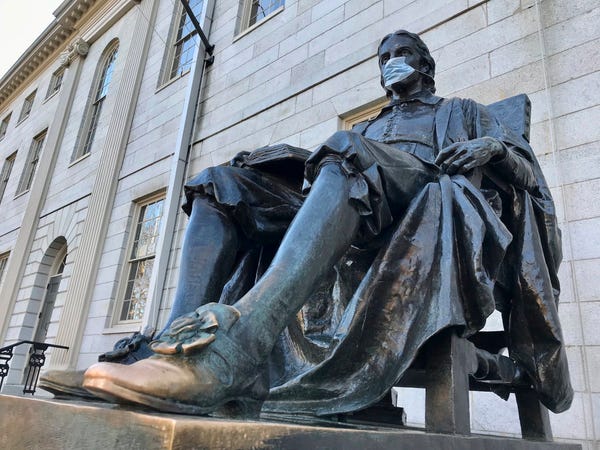 John Harvard would be a Trump official if he avoided the self-destructive career move in 1638, namely his death. Now, the plan is to muzzle him, too.

It hasn't been determined yet who will be the U.S. president between 2020 and 2024 and a group of "Harvard students" is distributing this petition that demands that all the officials within the Trump administration are banned on campus.

Petition circulating at Harvard to stop former Trump administration officials from attending, teaching or speaking at the university (Fox Business)

They couldn't attend, teach, or speak there; the intent is to prevent them from walking through Harvard Yard, too. Kayleigh McEnany, a smart, courageous, and blonde Trump spokeswoman (and a Harvard alumnus) already has plans to violate at least the latter restriction.

I just can't believe what this university where I have spent 6 years has become. Government officials are clearly some of the most natural people to speak at universities and after 4 years of Trump's tenure when many of these officials will become former officials, these people associated with decisions by the Trump administration are the most likely ones to have something to say to the departments that have anything to do with politics.

These left-wing loons don't seem to realize that they're guests there. The process of the "foundation of the college" began in 1636 but it couldn't get far because they didn't have money (that was different from $40+ billion in endowoment today). John Harvard, a clergyman, had the deathbed bequest "to the schoale or Colledge" which was so enthusiastically received that the Harvard Colledge [sic] was named after him. Given the importance of Harvard's money for the survival of the Harvard project, it is clear that the smartass tourguides comments that "Harvard didn't found the university" are misleading. He was surely one of the founders and the Harvard statue (depicting Sherman Hoar, a model) isn't quite a statue of three lies.

Harvard was a minister, an assistant preacher, whatever you want to call it, a thoroughly conservative person. If you want to build your own $40+ billion university that will be named after you, you need to work as an assistant to a preacher! ;-) Leftists should consider themselves guests at Harvard and if they behave wildly inappropriately for guests, they must be treated as trespassers. And if the Harvard Police is abolished or otherwise indisposed, it doesn't matter much and the order must be restored by the armed conservative Harvard students.

Things weren't always this bad. For example, in 2001, a former Clinton official Larry Summers was picked as the president of the Harvard University once George W. Bush superseded his former boss Bill Clinton in the White House. No problem for him (up to January 2005 when the Democratic Party secretary was labeled far right). In the same year, I was picked as a Harvard Junior Fellow, also after I described my heroic fight against the communists before 1989 and against a similar left-wing vermin in the 1990s (in my homeland). Now, the vermin seems to consider itself "the owner of Harvard" (and probably of its $40+ billion endowment, too) and there are apparently no adults in the rooms of Harvard who would return people and things where they belong.

Universities should be the most important places where ideas of all flavors are being interchanged, discussed, and analyzed. This obviously includes political ideas from the two main parties of the U.S. Someone who doesn't get this elementary yet essential point – a precondition for the university's treatment of the ideas about the society – just isn't a good enough person to become a college student. I believe that this statement was a matter of university consensus just some two decades ago. But lots of lousy students (and instructors) were hired through affirmative action, they got an exemption from these fundamental principles as well, and as their number and influence grew, universities like Harvard were turning into these extreme left-wing hells.
Luboš Motl v 5:50 AM
Share