I still believe that Trump will win handsomely tomorrow (see CNN: key model shows that Hillary will win 332-206 exactly 4 years ago or these comical left-wing idiots LOL) but that conclusion is largely based on fuzzy thinking, extrapolated and amplified corrections resulting from the 2016 mismatches, and feelings. Some of you may also be optimists but you may be shocked by the events tomorrow. You may suddenly become unable to think sharply. That's why you need to think about these matters in advance. You need to create a plan how to think tomorrow if catastrophic events take place. 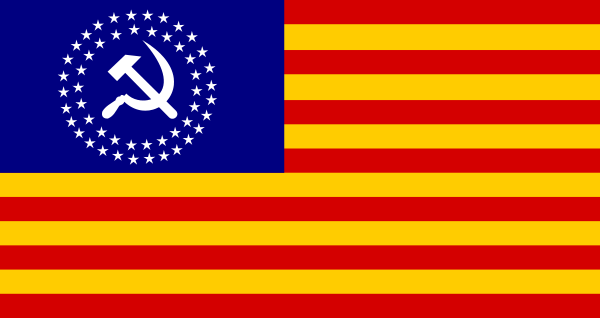 There is a nonzero risk that the Democratic Party will take over the Senate, House, and the White House. And if you really failed to take notice, the current Democratic Party is no longer the party of Andrew Jackson, the ethnic cleanser and tyrant. Jumping to the 20-21st century, it is not a party of the racist Woodrow Wilson, FDR, Truman, Kennedy, Johnson, Carter, Bill Clinton, and not even Obama.

The current Democratic Party is a vicious organization consisting of old labor union apparatchiks such as Biden who are however fading away very quickly to strengthen clueless radicals, a coalition of professional whining women and blacks, thieves, looters, rapists, sexual perverts, butt plugs inside mentally sick Swedish high school dropouts, unwise coders who became billionaires for writing "10 input message 20 print message on the other FB account" and who believe that this gives them the right to be the global dictators, and especialy parasites who have never done anything useful in their life but who believe that their connections to other Democrats make them entitled to collect significant wages. A party of hungry stinky rats who will devour everything they can devour and who will probably make the Bolshevik revolutionaries in Russia look like jolly fans of Rolls-Royce in comparison. I am pretty sure that the jolly Kim Jong-un is disturbed when he watches his U.S. comrades, how much more fanatical they are compared to himself.

These pathological organisms want to abolish the civil rights in the U.S., including the most fundamental ones (not just the right to bear arms, religious freedom...). The freedom of speech will disappear very quickly. It is very clear that most of them want to ban not only politically incorrect users of all social networks but all of the opposition media, too. Here, a Daily Kos writer is shocked that Rupert Murdoch isn't afraid of a Biden victory. Why is she shocked? Because it's common sense between these loons that Fox will be "canceled" as well. They don't think that the right question is whether the profits of Fox will soar. The right question for them is whether the likes of Murdoch should be executed.

Before you are murdered for having read The Reference Frame – a sad event that I simply can't bear any responsibility for, you know – you will be robbed of most of your assets. Even Biden, the most moderate part of the new system of power (who will be quickly forced to resign or commit suicide for greater progressive goals), wants to reverse all the recent tax cuts. That's just a tiny demo. Wealthy estates will be quickly hit with a 67% rate and even that is just the beginning.

Czechoslovak Bolshevik criminals have robbed my maternal grandfather of his wealth which would be equivalent to millions of dollars if effectively translated to the money of the present. They were rather radical but they paled in comparison with the contemporary U.S. leftists. Our communists of 1948 were dudes like my paternal grandfather ;-), hard-working workers in factories and in the fields. They still did respect the work to be the source of wealth – even though they only respected the brutest kinds of work. That's why there was still some meritocracy in their idea about "who should have enough money and how much"; theirs was just a heavily distorted meritocratic picture. The current U.S. leftists respect nothing of the sort. They don't respect the money as the capitalist system has distributed them; and they don't respect old-fashioned work, either.

It is conceivable that this Democratic Party will effectively rob the wealthy Americans of most of their assets and maybe "almost all of them". They need the money to some 100+ million supporters who are nothing else than welfare collectors. It's shocking that the same media that are hysterically writing about a flu-like illness almost 24 hours a day never mention the actual threats. You are at a serious risk of being materially devastated and some of you are at risk of being murdered by the new regime. The results of your work may be used for atrocious "reparations for slaves who were never slaves", further indoctrination of kids, encouragement of whole classes of the U.S. society not to work, and even military attacks against other countries that reject the looming Cultural Revolution in the U.S.

Even though all these plans may be calmly shelved in 2 days if and when Trump wins (I agree that Trump is just slowing down these terrible trends, however), I recommend you to think about the country where you could meaningfully emigrate; and, if you have some wealth, a country where you may hide some assets of yours from the thieves. You don't want to emigrate into a country that is undergoing a similar decay as the U.S. Sadly, I think that it includes all the Anglo-Saxon countries (UK, CA, AUS, NZ) as well as Germany, Belgium, Spain, and others. The situation is better in Austria, Denmark, Finland, Switzerland, and in the post-communist Europe. Countries like mine already have a higher happiness index than most "traditionally Western" countries.

I have referred to several kinds of pernicious Democratic Party policies and ideologies that capture the situation of January 2020. But don't forget about the new elephant in the room, the Covid hysteria. The Democratic Party has also become the party of lockdownism. It can decide to keep you in the U.S. forever; and maybe in your basement. If they take over the police and the military, they may be capable of easily enforcing these Fritzl-like changes to the basic freedom of movement. That is why you should better have plans to move (and move your family, if needed) before they can stop you, whether or not this movement is 100% legally kosher. What will matter is whether such a movement is physically possible.
Luboš Motl v 6:00 AM
Share