Up to a moment in October 2020, I tended to believe that Czechia (and many other countries) wouldn't see a significant increase in the total number of deaths per year (2020). It became clear to me when the first self-evidently elevated numbers from late September 2020 were coming out at this web page of the Czech Statistical Office (and especially in this table; you should download an updated version of the "tab" file if you read this text after January 2021). Suddenly, it was clear that the deaths with Covid were mostly real extra deaths due to Covid, indeed. 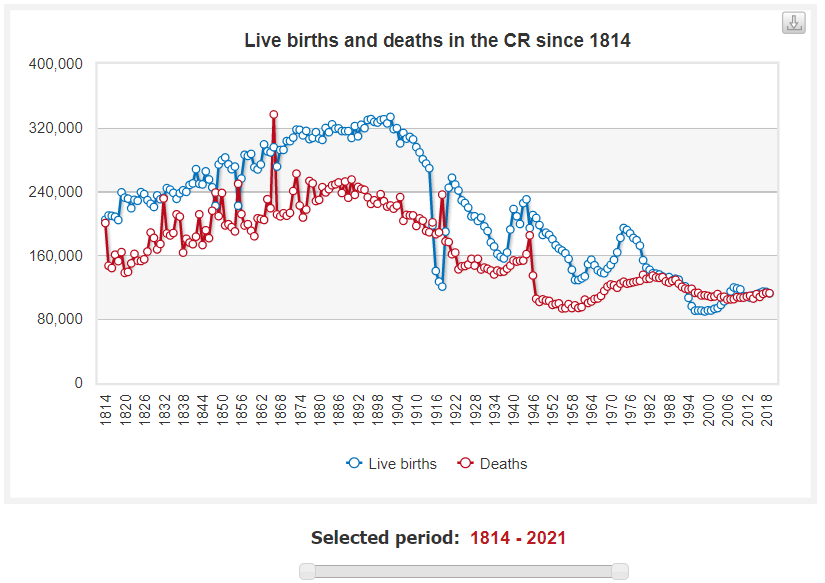 The graph is taken from this page of the Czech Statistical Office where I picked the maximum interval 1814-2019. The year 2020 will add a death dot at the level of the 1990 death dot. Imagine that I spent 5 minutes by editing the picture above.

The "tab Excel file" is organized according to weeks (starting from Monday and ending on Sunday) and I need to remind you of some basic facts about the calendar we are using and "what is called the Week X of the year Y". Fine.

Most years have 365 days. Every fourth year is a leap year with 366 days. Such a calendar would produce (and the previous, Julian calendar indeed did produce) years that last 365.25 days but that's longer than the astronomical 365.2422... solar days or so. So the Gregorian calendar makes an exception. The years that are multiple of 100 are not leap years even though they are multiples of 4. That would reduce the duration of the year to 365.24. That's a slightly big reduction so some leap years are returned, those that are multiples of 400 (although they are multiples of 100 and 4 which they always are). That brings us back to 365.2425, close to the astronomical figure of 365.2422, and the difference between these two numbers adds up to a "mistake by 1 day" in some 3,000 years. Let me remind the readers of this blog post who live in the year 5000 AD or so to remove a leap year to fix the Gregorian calendar. ;-) It's nice that some of you can still read but I must tell you that the reason why you insert or omit leap years is that you want the astronomical spring equinox to be oscillating between March 20th and 21st. Thanks for your understanding.

Fine. In practice, all years between 1901 and 2099 are leap years if and only if they are divisible by four (2000 was a leap year because it was a multiple of 400). The years 1700,1800,1900,2100 were not or will not be leap years but most of us don't care much. So most years have 365 days which is 7*52.142857... That is 52 weeks and one day. How many weeks from Monday to Sunday does a year possess? Well, a week from Monday to Sunday belongs to a year if a majority of the 7 days belongs to that year. Cleverly enough, 7 is an odd number so one side always wins. Equivalently, each week from Monday to Sunday belongs to the year on which the Thursday appears (the middle day of the week; we could pick it unambiguously exactly because 7 is odd).

When the weeks are assigned to the years in this standard way, each year ends up with 52 or 53 weeks. Most have 52 weeks, obviously. Which of them have 53 weeks and what is the percentage? Well, those years that start on Thursday also end on Thursday (if they are not leap years) or Friday (if they are leap years) so they have 53 weeks. Both the initial and final week is barely counted. The fraction of the weeks that start on Thursday is 1/7. Also, the leap years that start on Wednesday barely make it because they end on Thursday. The percentage of such year is 1/7*1/4. In total, we have\[ \frac{1}{7} + \frac{1}{4 \cdot 7 } = \frac{5}{28}. \] Yes, five over twenty-eight of years have 53 weeks, the remaining 23/28 years have 52 weeks. The years with 53 weeks included 2015 and 2020. You should be aware of the difference between 52-week-long and 53-week-long years to make further comparisons, assuming that the data are organized according to "weeks of a year" and not "days of a year".

So the Covid-19 epidemics surely brought us excess deaths but it wasn't a one-in-a-century event. It was closer to one-in-30-years event.

In the graph 1814-2019, you obviously find much more striking years. The graph was embedded at the top of this blog post. I think that smaller upticks are seen in 1814 (some Napoleonic wars that affected us here? I can only find 1814 battles in France) and 1832 (no idea what happened here in 1832). In 1855, the excess deaths were just about ~20k relatively to the surrounding years (not sure of the reason) but the excess in comparison with the surrounding years was well over 100,000 in 1866 (I guess we had this many casualties of the wars of Austria and Prussia? Can you confirm?). 1918 saw ~60,000 excess deaths relatively to the adjacent years (both the escalating First World War and the Spanish flu helped). 1945 had ~20,000 extra deaths relatively to 1944 but the figure dropped by 60,000 in 1946 (partly because the Sudetenland Germans were expelled and no longer counted, I guess). I feel very anxious about not seeing the Holocaust in 1942-1945, some 200,000+ Czechoslovak Jewish citizens were murdered. Are those completely omitted from the statistics of "citizens of Czechia"? Strange. It is possible that they aren't counted because the graph uses the Third Reich statistical conventions for the era of the occupation (in which case I am not sure whether they included the Sudetenland at all, it's pretty messy and lots of explanations would be needed).

You may see analogous remarkable irregularities in the number of births. In 1915-1919, you see a striking drop of the number of births by over 100,000 (by more than 50%). Why is it so? Well, dear kids, it is because men must love a woman for a kid to be born and most men were fighting in the First World War (usually on the losing Austrian side but some switch to the victorious Legion at the end LOL) which is why they didn't have so much opportunities to love their wives, especially not 9 months before the birth which is when the love matters most. ;-)

You actually see quite some spike of births during the Nazi occupation (from 1939 or 1940 which gradually decreased, even after the war; again, I am not sure whether it's a real effect for ethnic Czechs or whether it's due to some extra Germans counted in the Sudetenland or something), and another spike with the local peak in 1975. I vaguely belong to this generation of Husák's children. The post-Soviet-occupation president Gustáv Husák agreed with some financial support for families with kids since 1973 or so which is literally why many of us were born – love doesn't explain all births, it's also about the economy, stupid.

OK, so those of us who said that the Covid-19 epidemics wouldn't be seen in the total deaths per year at all were incorrect (well, I wasn't ever certain in any way, it just looked plausible up to the early autumn). The increase of 16,000 deaths in 2020 corresponds to "some six weeks of extra dying". But this excess was not among the 7 most influential events of the recent 200 years. It is the societal reaction with the omnipresent hysteria and lockdowns that was utterly unprecedented, not the underlying public health situation which has been moderate and unquestionably "precedented".

The year 2021 will still see some excess deaths but below those of 2020; a big majority of the dying was already over on January 1st (we're getting the decrease in the "third" wave which was peaking in the first days of 2020 and the autumn 2021 wave will no longer be comparable in impact, due to the natural immunity as well as vaccination by that time). I am assuming no other big issues such as a totally new virus or a world war. So the total number of deaths per 365 days of 2021 will be roughly between 115,000 and 125,000, close to the average of the years 2019 and 2020. But I do believe that by Spring 2021, we will already see some weeks with the number of Czech deaths below the normal weekly rate because some of the old and sick will have left us prematurely and the survivors were more resilient in average.