A screenshot of Android apps, widgets

This is an extremely simple and unimportant blog post: 7 commented screenshots of screens with apps and widgets on my tablet, Huawei MemoPad M5.

Nevertheless, I believe that simple "real life" blog posts are rare on the web.

Incidentally, it is an amazing tablet with a great display, thin and formidable metallic construction, impressive audio, fast and reliable fingerprint reader, good enough battery, fast charging etc. I haven't turned it off for 18 months and it's doing great. The Amazon URL goes to a 10-inch one, I have a smaller one.

OK, this is the extreme left screen 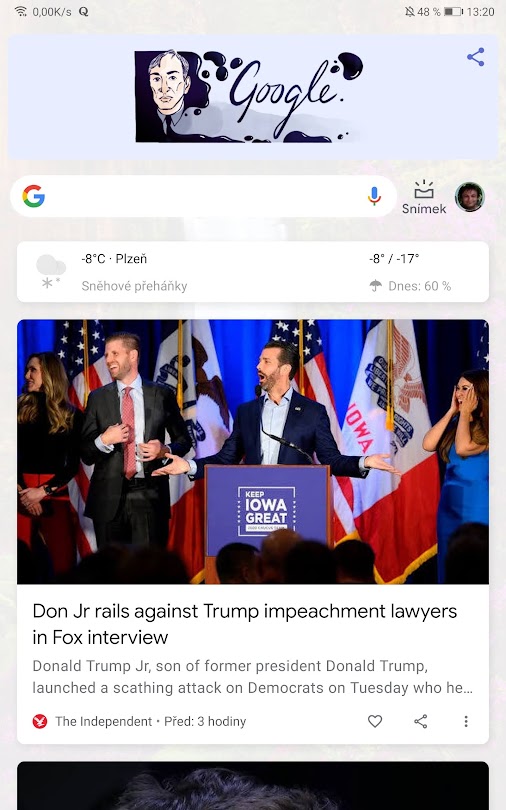 which was created by the "Google" app automatically. It has some news and simple weather. You may click at the screenshot above (and similar ones) and magnify the special page with the image using the mouse wheel.

Let's get to the first screen with actual app icons: 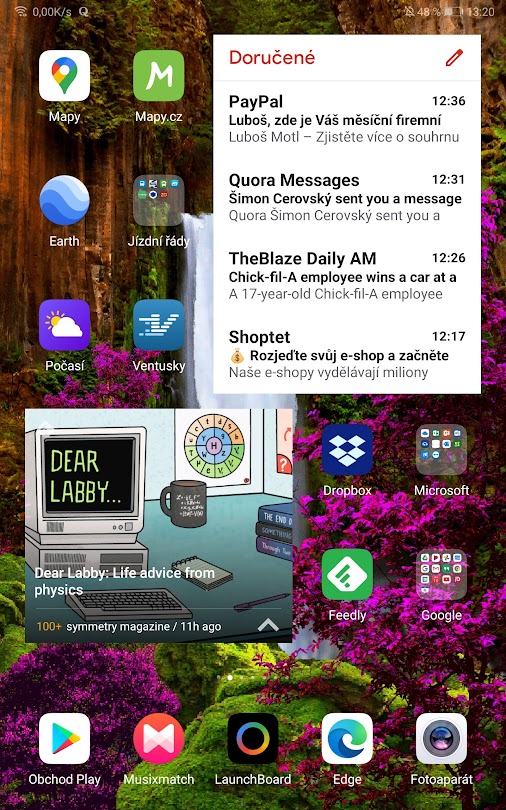 You see some animated background which was picked from the app "3D Wallpaper Parallax". I won't collect all the links to the Google App Store, you need to search. At the bottom, you see the standard 5 apps on every home screen: the App Store, Musixmatch for the quick identification of songs through the microphone, LaunchBoard which is an excellent App Drawer where you may quickly access any app according to the initial letter, Microsoft Edge which is my preferred web browsers on all platforms (it is a functional clone of Google Chrome but I believe that Microsoft, a firm outside the Silicon Valley, is still dangerous for politically sane people than Google), and a camera app. On the phone, it's similar but there is the "phone" app and the "text messages" in a similar place.

In the upper right corner, you have a "Gmail" widget, configured to show the inbox. In the left lower corner, there is "Feedly", an RSS feed reader compatible with a Google-account-based list of feeds. Feedly has a widget and the green app icon, too.

The app icons include "Google Maps" (the colorful pin) but especially "Mapy.cz", the world's best map app with the green-background-white-script-M icon. It also has street view (Panorama), navigation, offline maps for any region of any country in the world, recording of tracks, and much more. Some functionality is restricted to Czechia but most are OK globally, you should try it.

Then you see "Google Earth", "Yahoo Weather", "Ventusky" (a weather map app), and various bus and trains schedules in the folder. If you continue, you see Dropbox and assorted Microsoft apps: OneDrive, Excel, PowerPoint, Word, Outlook, E-mail, Microsoft Translator, Computer Launcher (Windows 10-like launcher), and I added TeamViewer to remotely control PCs. A similar Google folder has the Google Drive, Google Films, Google Photos, Gallery, Google, Gmail, Hangouts, Chrome (which I deprecated), Google Calendar, Huawei Calendar, YouTube app, Parler (not revived yet), and Tablet Messenger (which works like WhatsApp if both phone and tablet are online and nearby). 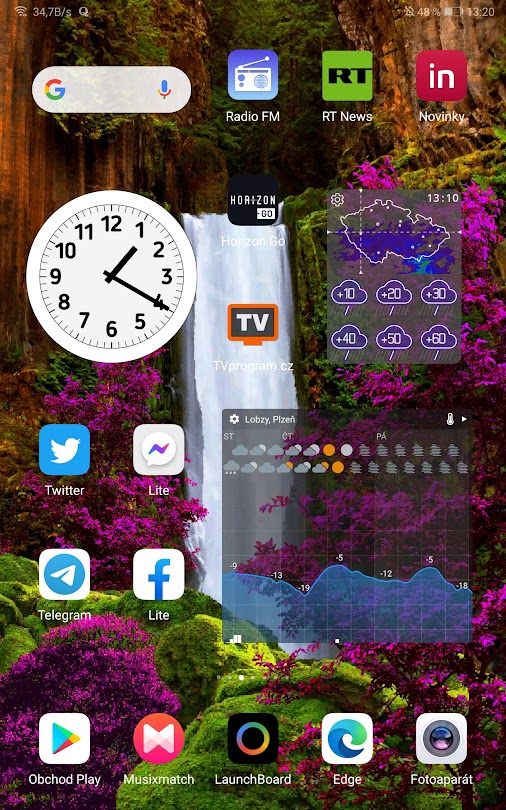 On this screen, you see a no-nonsense analog clock widget, "uClock", which has a Russian creator. There is a "Google" app button with the microphone for voice-based searches. The news-like app include "Radio FM" (FM Radio), "RT News" (formerly Russia Today; the world's best mainstream news app in the English language), "Novinky" (a mainstream Czech news app), "Horizon TV" (UPC TV on the tablet because I am subscribed), and "TVprogram.cz" (a TV program). The communication apps include "Twitter", "Telegram" (a likely future replacement), "Messenger Lite" (messages from FB), and "Facebook Lite". I don't really use FB.

The two weather widgets are "MeteoRadar" with the map of the Czech precipitation (it may fail to work outside Czechia); and the perfect "Klara" weather widget which has nice to read temperature graphs, pressure graphs, cloudiness graphs, and wind graphs. Both weather apps are made by "Androworks", a Czech group. In particular, "Klara" is highly recommended. It uses the data from the Norwegian Meteorological Institute. 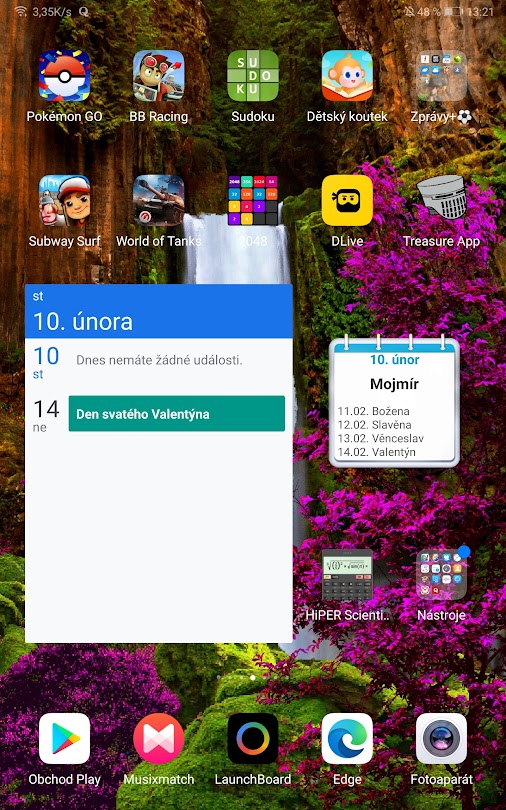 On this screen, you mostly see games, not that they are used much. "Pokémon Go", "BB Racing", "Sudoku", "Children's Corner", "Subway Surfer", "World of Tanks", "2048", "DLive" (a platform for gamers to broadcast their playing), and "Treasure App". The name day widget on the right (with an app) is the "Svátky a jména" and will likely be useful for Czechs only. On the left side, you see a "Google Calendar" widget with an empty agenda (it's normally not empty). "HiPER Scientific Calculator" is the most conservative scientific calculator I could find. The folder with tools includes some unnecessary icon, "3D Wallpapers", "Clinometer" (for making surfaces horizontal), "Support", "Music", Huawei "Calculator", a "Compass", "Sound Recorder", "Mirror", a "QR reader", "Phone Clone", "Contacts", and "Quora", a special app for the question-and-answer server which is not a huge advantage relatively to the website. The "Zprávy" or "News" folder has "Infowars", "iDNES.cz" (another Czech MSM), "Meteoradar", "Klara", "Swype Dragon" keyboard (I normally use "Microsoft Swift" now), "Battery" (for a widget, soon), "Downloads". 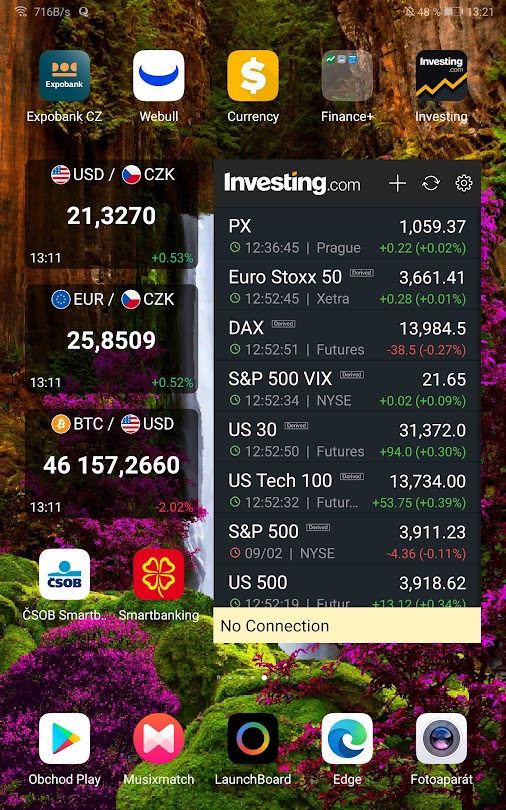 This is a mostly financial screen. The online banking apps are Czech, for "Expobank" (signing app), "ČSOB", and the related "Smartbanking" of Poštovní spořitelna. "WeBull" is an app for trading and stock graphs. The big stock index-and-prices widget is from Investing.com (which I consider the best one for these purposes) and the three Forex widgets are created by the app called "Centi" by NikitaDev. In the folder, there is also "Stoxy", "Stockmarkets Teletraders", and one more (Czech) financial app that I don't really use. "Investing.com" has another app icon there. 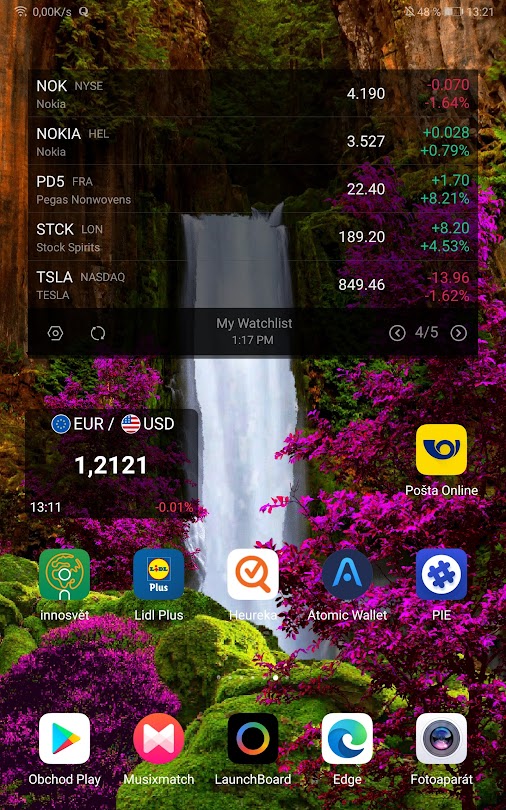 On this screen, there is another Forex widget from "Centi", apps for the Czech Post (the yellow one), "Innosvět" (RWE gas provider), "Lidl Plus" (grocery store discount program), "Heuréka" (the leading Czech price comparison, not much better than the web pages), and two crypto wallets which I don't use, "Atomic Wallet" and "PIE". I believe that the stock quote widget is one from "WeBull". 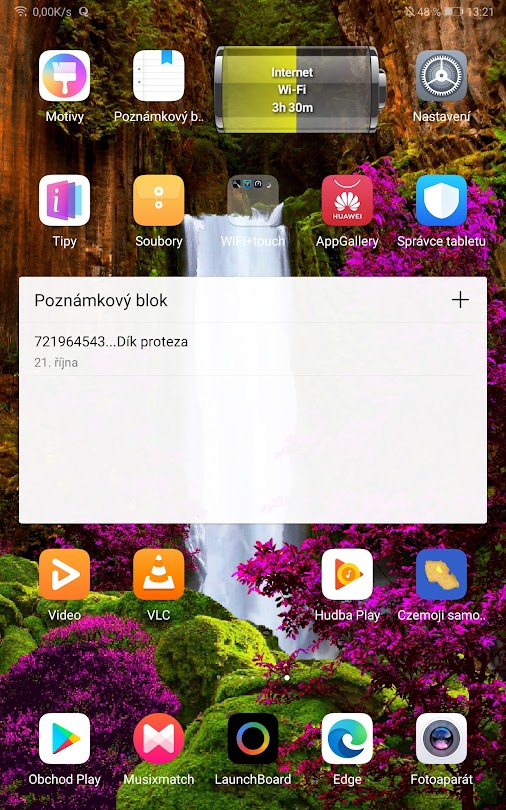 Here you have a "Notepad" widget, I believe it is a Huawei Notepad, plus "Themes", "Tips", "Files" (also specific for Huawei, I guess, it has a safebox and other things), a "Battery" widget, "Tablet Management", "Video" (Huawei?), "VLC" (the most reliable player of all audio and video formats), "Music Play" (Huawei?), and "CZemoji" (the best 200 Emoji in the world which are all about the Czech culture but were drawn by a Slovak female artist).