For a decade, since the freezing winters 2008-2011 or so, the chilly weather and deep snow has been relatively rare in Czechia – e.g. here in Pilsen. Well, it's different now. After the safely above-the-normal rainy weather 2020 that ended the ludicrous fearmongering about the once-in-500-years drought (see the maps at Interdrought.cz; even one meter of soil is saturated with water almost everywhere now), we also enjoy a standard old-fashioned white winter. 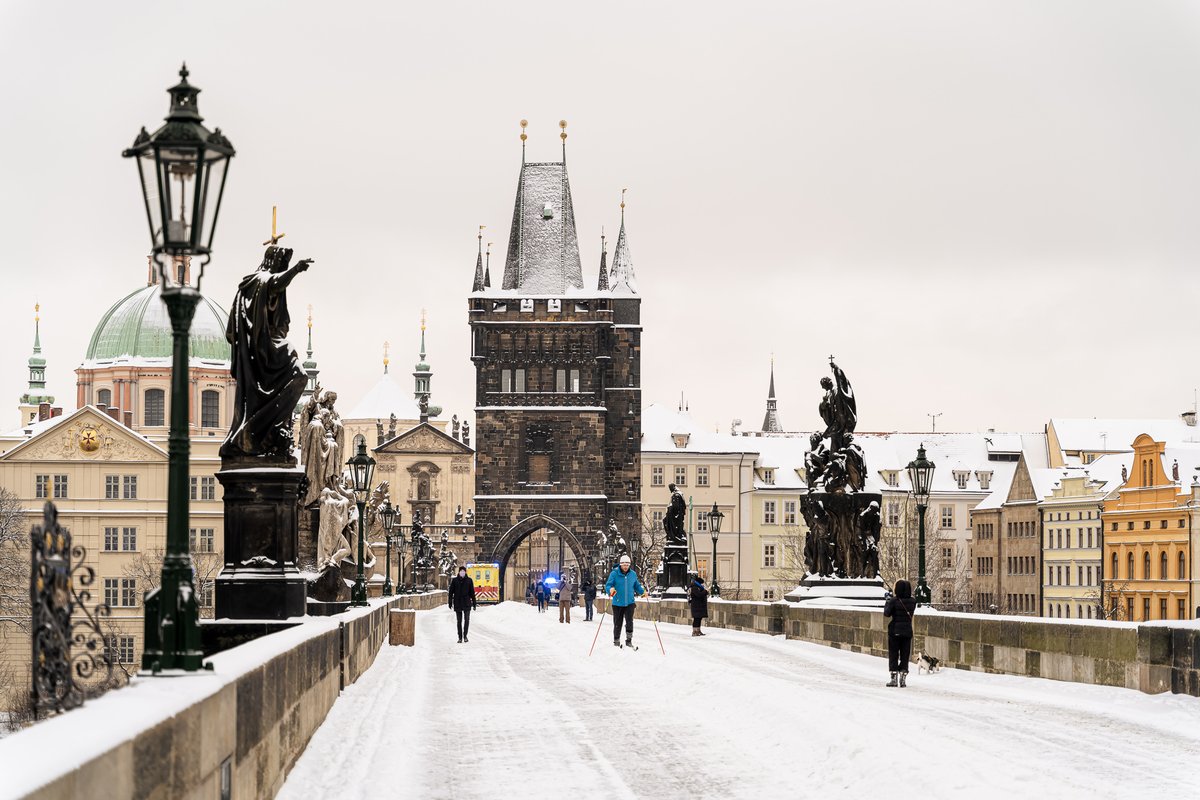 People are cross-country skiing in Pilsen and downtown Prague. Yes, the links offer you skiers on the Charles Bridge, Old Town Square (this photo of the mayor of Prague over there is pretty cool, indeed), and kids bobsleding near the Prague Castle (the minister of interior claims that the Petřín Slopes aren't slopes and cops may collect up to $500, oh, really? I hope they won't try to fine Borat.).

The Weather Underground is forecasting –17 °C for Thursday morning. The records for Pilsen say that we have seen –25 °C and +22 °C as the ultimate records in February while the average low and high, –4.6 and +2.1 °C, are approximately symmetrically placed around the daily mean –1.3 °C.

The apparent year-to-year cooling obviously cannot be attributed to CO2. The concentration is some 1.0-2.5 ppm higher than one year ago, when the Covid hysteria was getting started. So not only the CO2 failed to drop significantly. It didn't drop at all. In fact, its year-to-year increase is just slightly smaller than what it was in recent years (you would need the 2020 lockdown times 5 to stop the growth of CO2, imagine the impact on our lives). Still, I find it rather likely that the cooler Czech winter 2020-2021 could be largely man-made. The snow is whiter and more reflective and it could be due to the drop of the actual, dirty pollution. I am not terribly certain about that attribution.

Well, I also think that the ongoing La Niňa episode which is strongest since the 2010-2011 winter (ten years ago) must also be responsible for many apparent "cooling events" although Czechia is surely not a place that is expected to be directly affected by El Niňos and La Niňas. (Sorry for the Czech Spanish accents, I agreed with the Spanish king that our letters are equivalent to the Spanish ones. The Czech letter Ň was also introduced by Mr John Huss, a heretic burned at stake in 1415, and the Spanish Inquisition surely loves this victim of their fellow German murderers now LOL!)

An asymmetry that isn't discussed too often is the following: it seems that the climate finds it much more likely to drop to heavily sub-freezing (subzero in Celsius degrees) temperatures. The lowest temperature recorded on Earth was –89.2 °C in the Vostok area, Antarctica, which is controlled by the Russians and used for the ice cores etc. It was in 1983 and the thermometers really measured the air. Satellites determined the temperature of surface ice to be –93.2 °C at some mountains in Antarctica, in 2010. The surface ice temperature aren't quite the same as that of the nearby ice but you may see that they got comparably low.

Minus ninety degrees is a fudging chilly weather. The average temperature on Earth is some +15 °C so this record is an impressive 105 °C below the "overall spacetime average". On the other hand, the highest temperature recorded on Earth was 56.7 °C, near Death Valley in Eastern California. People are constantly brainwashed by the global warming fantasies so they would guess that this record must be a recent event. Well, it happened in 1913. The recent records are the cool ones, the hot ones are ancient. At any rate, 56.7 °C is just some 40 °C above the "overall spacetime average" temperature on Earth and 40 is much less than 105.

You can easily "feel" that a proper winter becomes self-confident when it arrives. Suddenly, the snow is unlikely to melt for many days (the Pilsner snow of the recent decade was pretty much a rare fluctuation that is expected to disappear soon!) and the temperature's getting below –15 °C seems easy and rather likely. The precise attribution of this fact, if you believe that it is a fact, may be subtle but I think that the most obvious reason is the heat capacity of water and ice. Liquid water happens to have the highest heat capacity among all ordinary enough substances but ice doesn't quite copy it:

The ratio is a bit over two. If you imagine that it is mostly water or ice that get warmer or cooler to absorb or donate the flow of heat (energy in joules), the same mass of ice must change the temperature by an amount that is twice as large as it is for water for the transferred heat (energy in the thermal form) to be the same. You may also want to know the latent heat:

Well, first, the required phase transition slows down or ideally stops the temperature change completely. When the temperature drops from positive numbers towards the freezing point, it stops there because the water needs to freeze over and to do so, it needs to lose as much internal energy as if you cooled liquid water by 80 °C, as I previously said. In this process, the temperature is stuck at 0 °C and what is changing is the fraction of the water that has frozen over. It's even more extreme when your global warming drives the temperature or your hospitable town towards 100 °C. It really slows down there because the equivalent temperature difference is 540 °C, even higher than for the melting. In practice, the evaporation of water also occurs at lower temperatures and although its rate is negligible relatively to the evaporation at the boiling point, it is substantial enough for the temperatures of the humid places to be intensely repelled from 100 °C well before you get there.

For the higher temperatures, the available water may evaporate and the warming of the surface (and the nearby atmosphere) may accelerate after that because water no longer prevents a dramatic rise of temperature. Fires in dry forests do something like that. The water doesn't actually disappear on the other side, when it is freezing, but its amount is limited (water only gets to the soil, not to heavy rocks; at least I talk about the water that effective transfers the heat to large areas of the Earth's surface) and it simply may freeze over (on the land, not the oceans, at least not so far). So sometimes, and these days in Czechia are an example, the water in the soil is completely frozen. The barrier that has repelled the climate from sub-zero temperatures (the latent heat of ice) has collapsed. The further cooling actually becomes easier at that point because the heat capacity of ice is just 50% of that of the liquid water, as I reminded you above.

There may be other reasons why the cooling may become much easier than what it was at temperatures above zero, including feedbacks. When you cover large fields and forests by snow and ice, the albedo (reflectivity) of the Earth's surface goes up significantly. And because the white Earth repels the solar radiation more perfectly, it isn't getting heated up by our star much. That leads to a further cooling and, potentially, the spreading of ice and snow to new places.

Instead of the arithmetic average temperature, you might consider other kinds of averages such as the median temperature or the arithmetic average of the heat that is needed to heat one kg of water or ice over there to 80 °C, for example. This measure would reflect both the differing heat capacities of water and ice; as well as the slowdown during the freezing or melting (the condensed phase transition). Such a replacement for temperature would probably have more uniforms variations.

I need to explicitly emphasize one more consequence of these subtleties related to the average. If you admit that the sub-zero temperatures may become more negative and potentially extremely chilly rather easily, it means that the temperature averaged over time may easily be below freezing even if and when a majority of the years actually saw the temperature above 0 °C. The chilly minority is often extreme enough to beat the warm majority in the arithmetic average!

There is a similar and vaguely related asymmetry. Look at the temperatures from the Vostok ice core. If you carefully distinguish which of the sides (left or right) is the distant past and the present (different graphs use the opposite conventions!), you will see that the periods of the warming are self-evidently faster (i.e. shorter) than the cooling ones. So most of the time of the glaciation cycles has been spent by a "gradual cooling" while the "abrupt warming" was more rare (as a fraction of time) but was enough to compensate the long periods of the slow cooling. Most likely, some abrupt episodes that just melted the ice and removed the albedo feedbacks should be the main cause behind this asymmetry. There were almost certainly no millions of SUVs hundreds of thousands years ago! ;-)

If we live in the natural period of the warming in these glaciation cycles, you may say that it is an unlikely phenomenon because those are a minority of the periods. However, they are only a minority if you really count the majorities and minorities in seconds. That's not necessarily the equivalent measure to a "majority of interesting events in animals' and people's lives" because most of the interesting life occurs in warm phases – and maybe in the phases when it is getting warmer, too (liberation from the ice sheets are probably the key). Because the "events in one's life or the human species' lives" are the more relevant choice of a "measure" for our lives than "seconds", emphasizing that a period is a "minority in seconds" is rather demagogic. When Central Europe was covered by a one-kilometer layer of ice which was gradually getting even cooler, it wasn't a terribly nice period for the Europeans to live and claims that this period should be considered the "normal" or our "role model" is rather idiotic, isn't it?

Nevertheless, this is the type of would-be argumentation that the global warming ideologues spread all the time, without a proper punishment so far. Have you ever been criticized for living in a period that is warmer than the time of mammoths? I am getting criticized for that fact all the time! But as Mr Huml, a Neanderthal with a running nose, told Mr Mach and Miss Šebestová, the ice age is the ice age!