Why civilization owes everything to capitalism: a lesson of a new subject

I spent about five more hours on the phone with someone whom I understand rather well. But when I heard that all the landlords are parasites, all rents are excessive, and people have the human right in live in their real estate, well, I saw that the understanding has some limits.

It seems to me that schools should be teaching some kind of economic and financial literacy – and especially the basics of capitalism, what it means, and why it statistically directs mankind in the optimum direction. Such a subject could be combined with history.

Schoolkids should be explained that our whole Universe was in a hot dense state, then nearly 14 billion years expansion started, wait. The Earth began to cool... OK, species competed, evolved, and there were humans. Climate kept on changing, and the Pleistocene started (with its occasional ice ages) 2.6 million years ago. The Holocene began 11,700 years ago, after the last glacial period.

Suddenly the annoying, one-mile-thick ice sheets disappeared from the Old Continent and Europe was made great again... OK, none of these things are the point of the "capitalist subject" I want to discuss. What I really want to start with is the civilization. The Wikipedia page gives some definition but I would choose a crisper one:

A civilization is a conglomerate of lives of humans that live together who occasionally create things and values that continue to live after the creators die.

So the civilization is a system in which the human society may live where someone sometimes leaves things that outlive the originator – who should better be remembered. These things that outlive the originator are often buildings etc. which is why construction is a typical aspect of architecture; but they may be books etc. which is writing is often associated with civilizations, too. 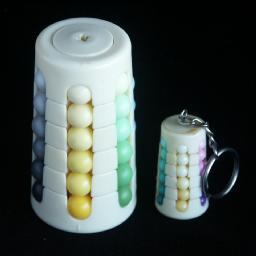 Babylonians hired a Hungarian engineer Mr Rubik who built the Babylonian tower for them.

Note that in more primitive cultures, people could have used some tools but their purpose was to serve them (e.g. to kill an animal) while the human users were around. No civilization has been shown to exist before the Holocene (11,700 years ago) and in most cases, we think that the civilization only really started some 5,500 years ago. Sumer is the oldest known one among the potential cradles of civilization. In the conventional history, kids learn something about the life and beliefs in ancient Mesopotamia, Babylon, Egypt, China, India, and other places... Those things are cool.

But the "financial literacy" aspects of these events are completely ignored and indeed, many kids fail to get the point. An important point is that

the definition of a civilization is enough to see that civilizations need to respect the ownership rights and the inheritance.

For some creations to outlive the human creators, they must be allowed to be owned by the creators during their life. If the assets were being lost or nationalized right away, people would have no motivation to create more than they need to survive right now, and nothing would be left after they die. Also, the creators should better be motivated to create more than what they need in their life. Why do they care what happens after their life? It's because they can decide that someone inherits the assets and this motivates them to create more (and sometimes much more) than what is needed up to their death. They do more to help other people who will outlive them (outlive the creators) – and they expect that the heirs will celebrate them.

My point is that due to an argument that is close to a mathematical proof, the basic prerequisites of capitalism, ownership right and inheritance, directly follow from the condition that the society builds something that transcends the individual human lives. And this transcendence is actually a great thing, an important aspect of the human supremacy relatively to other organisms (animals and below).

Because the ownership right must be pretty much a rule, some extra consequences follow. The capital is often accumulated (accumulation of capital); and it is only moved from one party to another when both of them agree. When both sides of a transaction agree, the transaction is pretty much good for both of them and in average, we should assume that it is "symmetrically" good for both sides. And when the transaction doesn't affect others too much (only the two participants), it's good for the whole nation or mankind (because it's good for both relevant sides, according to themselves). Barter is an example of such a transaction. It's inconvenient and the money is a good invention or an asset class to store.

The early civilizations needed to build a lot and they needed a lot of work. That's why slaves were so useful. Slaves could be bought or sold for the money, too. Karl Marx and his comrades presented slavery as a special societal regime. But slavery is really just a stage of capitalism in which slaves are an important commodity. In the same way, feudalism is an important stage of capitalism in which the land is important. When the agriculture decreased to a small part of nations' GDP, the capitalists working with machines and factories (and similar modern things) outshined the feudals by their wealth and feudalism was superseded by capitalism that even Karl Marx calls in this way.

The subject would explain why the employment contract, renting contract, and other contracts are just additional examples of consensual contracts that are agreed by both sides. One side (tenant, employer) generally wants the thing to be cheaper (lower salary or rent); the other side (landlord, employee) wants the number (salary or rent) to be higher. But they find a number in between that is tolerable for both sides which is why the claims that the number is "inadequate" is unjustified. Tenants are competing (they must pay more than others) to get the apartments; landlords are competing (they sometimes need to lower the required rent) to get the tenants; employers are competing to get the employers (they need to increase the wage); employees are competing with others to get the jobs etc. (sometimes they need to be OK with a lower wage).

When e.g. new workers (ethnic Czechs) moved to Škoda Works, the largest factory of Austria-Hungary which was here in Pilsen, they generally did it because it has improved their lives. Emil Škoda, the owner of the factory, needed to pay sufficiently low wages so that he could also make a profit and expand, and that's what happened. And by this process, all the people who were trying were getting richer and richer.

The subject should feature many situations (and examples including homework exercises) that discuss why some people behave in one way or another, what becomes better for them, and why the consensual transactions generally keep on to improving everyone's lives. In many case, the positive effect of the rules of capitalism (and, in many cases, the near-optimum character of the behavior indicated by the markets) may be proved almost like mathematical theorems and maybe parts of the subjects could be phrased in the "definition, theorem, proof" mathematical format.

I am convinced that the character of these propositions – that capitalism is basically a necessary condition for the society to go in the right direction – are almost as rocksolid as some statements about mathematics and natural sciences, they should be treated analogously, and a schoolkid who fails to understand the basic ideas (or a kid who adopts an extreme left-wing insane positions such as "the wage is always too low for a worker when he doesn't like it" or "the rent is always too high...") should get a failing grade for similar reasons as a kid who calculates that 2+2=5.

A kid (or adult) who claims that a landlord (who just bought real estate for the money from his work or inheritace, which is being rented to someone) is a "parasite" is wrong similarly to the 2+2=5 kid. The market-dictated prices, wages, rents, and rates are pretty much by construction the fairest possible ones; and it is those who prefer the extreme one-sided adjectives typical for one sides who are unhinged extremists or people who are as wrong as the 2+2=5 folks. It is the person who claims to be entitled to possess or live in a real estate who is self-evidently a parasite, not the landlord. Believing that capitalism or banking is evil (banking and various kinds of investment and money transfers from buyers... to shareholders... would be another part of the subject: the kids should understand why it's important for the prices to be sustainable and fair according to the markets) is just a kind of stupidity, not a position that should be treated as "equally good" as the correct answers.

Of course, especially in the wake of the victory of stinky and toxic political excrements in the recent rigged U.S. elections, the Western societies are moving in the opposite direction, towards an ever greater obfuscation, far left demagogy, worshiping of the actual parasites (useless animals who increasingly present themselves as the elites), and, ultimately, teaching kids that 2+2=5.