Comenius, the father of modern education

On March 28th, 1592, John Amos Comenius was born to a Protestant family in South Moravia, in or near the Uherský Brod (the precise place is not known).

This "Teacher of Nations", as he is nicknamed in Czechia, or the "Father of Modern Education" or "Father of Christian Education", considered himself Czech and spoke (and wrote) Czech perfectly but his family name was actually Hungarian, Szeges (CZ translit.: Segeš; Hungarians' S and Š is interchanged relatively to Polish). Well, the adjective "Uherský" in the name of a town does actually mean "[Old Royal] Hungarian" in Czech and Hungary is not far. 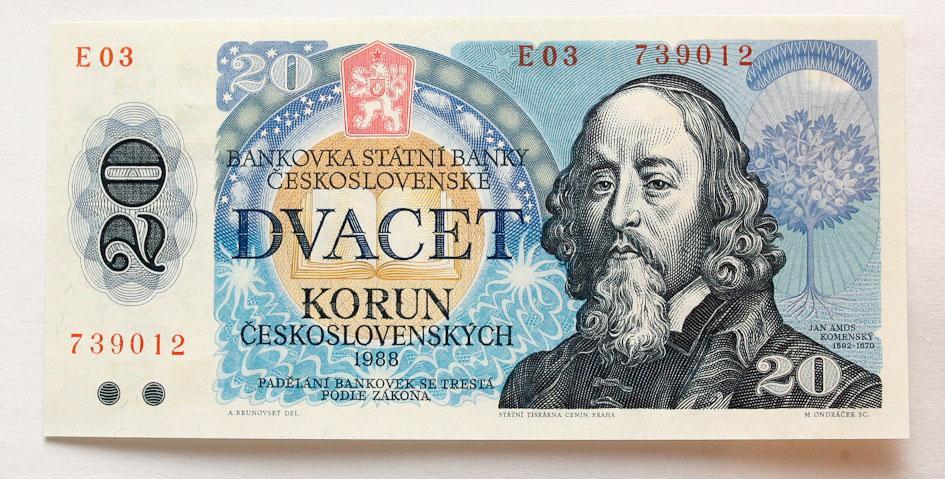 A CSK [Czechoslovak koruna, a retroactively created acronym] 20 banknote with Comenius. He is also at the modern CZK 200 banknote.

Well, the most convincing birthplace is Komňa, a village in the UH District of the Zlín Region, because it would explain his Czech adopted surname Komenský (Latin: Comenius); the adjective based on Komňa is Komeňský which is almost the same LOL.

OK, he was a member – and the last bishop – of the [Old] Unity of the Brethren, basically heirs to the Czech Hussites (pre-reformers) who upgraded themselves to "almost" standard Protestants. Because the Thirty Years' War generally strengthened the Catholic power in Bohemia, he had to emigrate and spent most of his life in exile (places which were more friendly towards the Protestants than our kingdom that had been conquered by some more hardcore members of the House of Habsburg): Hungary, Poland, Sweden, and especially the United Provinces of the Netherlands (or the Dutch Republic; yes, progressive dogmas notwithstanding, the Netherlands later went from a republic to a kingdom but Napoleon had to help to achieve that in 1814 LOL). He died in Amsterdam in 1670 and is buried in Naarden.

He was an important and lively intellectual and wrote lots of things, especially about teaching. He wrote both in Latin as well as in quite some impressive Czech. His books included Didactica Magna (The Great Book of Didactics), Orbis Pictus (The World In Images), and dozens of other things in Latin and Czech. I don't want this blog post to become a dull list of titles. Instead, let me say something very important that all of us – including Czech patriots – often forget when we are asked about the well-known Czech inventions (I only added Comenius' inventions into my answer there now LOL).

OK, let us ask: Why do we send 6-year-old kids to the primary schools? (America did start primary schools sometime in the 17th century.) Why do kids attend primary schools after the 6th birthday and speak their language there? Why are they expected to learn other languages after age of 6? Why do we mostly avoid physical punishment? Why are kids supposed to gain some experience with the material at schools? Why are there school years and holidays? ... He basically invented the modern standard for all these things and more: There is a lot of common sense but some of it wasn't quite common. Someone had to crystallize these principles in his head and it was mostly Comenius whom the schools of the world still largely copy (or they fail, in most other cases). In other books, he focused on the education of languages and proposed his own method. Students starring in theater plays were a part of this system – they have the advantages of making the students enthusiastic. His Schola Ludus is often translated as "A Playful School" (and people imagine kindergarten-style games) but he actually meant theater plays by this title! ;-)

The 65th episode of an animated series about the History of the Valiant Czech Nation, narrated by the double-tailed (=male) lion. It focuses on the fact that Comenius was celebrated in the world but not at home. There is another Comenius cartoon (also narrated by actor Jiří Lábus) here which emphasizes Comenius' very difficult childhood (he lost parents, siblings when he was 12) and his wives, among other things.

Again, in somewhat different words, he had the following principles of teaching Comenius insisted on the right nutrition for the kids, the right lifestyle including the proper amount of sleep, the moral education, and the religious education. He mostly recommended to avoid the physical punishment but there were exceptions where he thought that they were a wonderful idea. He divided children to 2*3 = 6 groups: These days, the groups were simplified from 6 to 1-2. Postmodern students are either lazy or defiant but they are always called delightful; and they are brightness challenged but they must be called bright. ;-)

OK, Comenius has written and done lots of things, he also wrote songs and lyrics, philosophical works (especially The Labyrinth of the World and the Paradise of the Heart but also two previous works) and many other things (his most extensive work, a huge dictionary The Treasure of the Czech Language, was destroyed by a fire in Poland). He has written some 200 books in total, not bad. Didactics is a "soft science" but he was a hardcore important guy who has consistently articulated many things that have been taken for granted in the following centuries. A master of a very practical occupation where the common sense is very important – something that the Czech lands have been rather capable of creating.