Triangles in a row

My friend Prof Vlasta Dlab (Ottawa-Bzí) sent me his solution (which will appear in a Czech MathPhys Journal) to the following puzzle (well, its generalization from \(4\) to \(n\) triangles): 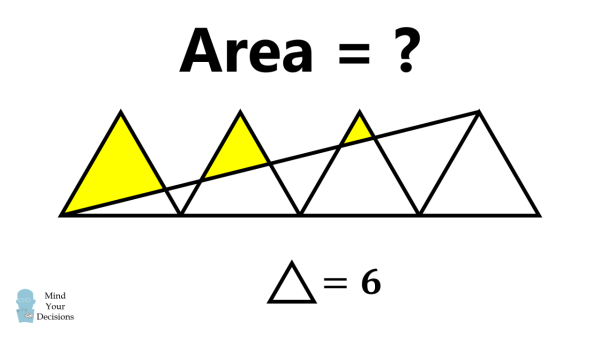 He was deeply dissatisfied with a solution of this puzzle on YouTube (posted in January 2021) because a part of that derivation is a blind application of a geometric formula (a sine formula for triangular areas) which doesn't really reveal the simplicity of the situation and its independence of angles, precise shapes... I completely agree with Vlasta. While the YouTube solution looks short, it uses an excessively heavy and irrelevant tool, and the person using these methods would probably waste too much extra time if he were supposed to solve a nearly isomorphic problem.

A good mathematician should look what matters and what doesn't matter. And an important point about this calculation of areas is that the angles don't matter at all! Correspondingly, you shouldn't be using the Pythagorean theorem, a sine formula for triangular areas, Heron's formula, and similar tools that deal with angles and, almost equivalently, with ratios of lengths of line intervals that go in different directions. In a good, conceptual solution, the "square roots of three" and similar things shouldn't appear at all (while they appear in the YouTube video). 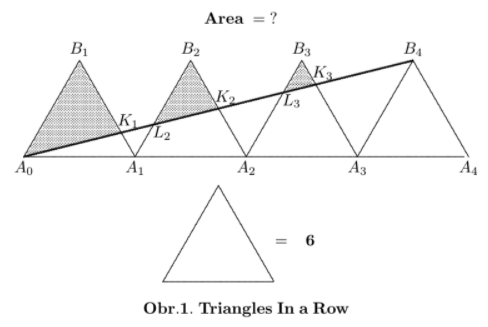 Oops, I need to post Vlasta's basic diagram to clarify the names of the points that I also use.

Let me say another thing. It's nice to use the simplest tools and one may find some cleverness, beauty, or pattern recognition in people's methods when they do so. On the other hand, I do believe that it is only a "clever approach to teaching" if we assume that the student will remain stuck at a lower stage of his or her understanding of mathematics. And at that lower stage, or even when he is not stuck, he may brag about a clever elegant idea. But the ability to do things cleverly can't quite be taught. I think that schools should teach powerful tools that the students may get even if these tools will often be more powerful than needed to solve problems such as this one. Powerful tools do belong to mathematics, they may be useful to do really wonderful things, and shooting an ant with a cannon is sometimes fun, too!


Almost as much fun as shooting an innocent, gullible cat with the water from a Kofola bottle.