A retarded warrior against slavery – which has been abolished for a long time, indeed – has demonstrated similar comrades' total absence of basic education, intelligence, and common sense. Under the blog post about Newton who benefited from colonialism, he denied the fact that every sensible person knows, namely that slavery (like many things that are mindlessly frowned upon by leftists today) has played an important role for the development of many civilizations, starting with ancient Greece and Rome and later the United States of America. 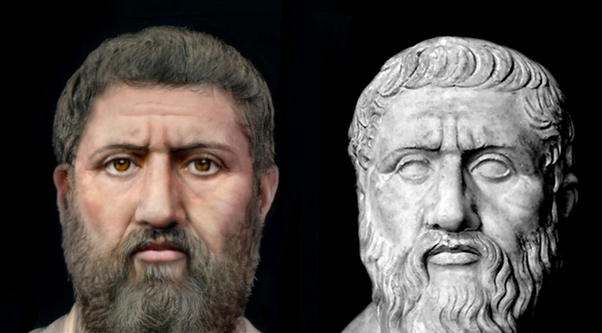 Concerning the former, the ancient world, structures that were left wouldn't stand without slaves. For example, The Colosseum was built within a decade but up to 100 thousand slaves had to work on it! We just wouldn't have The Colosseum and many similar gems without slavery. Everyone who claims that slavery shouldn't have ever existed is the same kind of a savage as the ISIS savages who were demolishing the structures in the Middle East. Concerning the latter, the independence of the United States of America heavily depended on cotton, pretty much the most important U.S. export. That's why the South – and slaves that were needed for a sufficient amount of this production – has played a greater role for the very existence of the independent U.S. than the North. The South (with its slaveowners and everyone else) was being "exploited" by the North.

But when he returned the discussion to ancient Greece, he even claimed that the ancient Greeks would have been more advanced without slavery and this sequence of preposterous statements culminated with this incredible beauty:

I mean ancient Greeks. They could have started an industrial revolution, but were not interested enough in developing practical applications of their science

Wow. So he criticizes slavery for the shortage of steam engines, diesel engines, and perhaps smartphones in ancient Greece. It is so easy for everyone to build a rocket or a touch screen and the only reason why Socrates didn't build his iPhone was the evil of slavery and the laziness that it has allowed him to nurture.

I just can't believe. Even most kids in the kindergarten surely understand that the ancient Greeks were lacking some 2,000 years worth of science and technology, don't they? This simple statement by the nutcase shows that the person – and I am sure that there are tens of millions of such persons today, and many schools are deliberately producing this kind of absolute imbeciles – is dumb at every conceivable level.

First, he wanted the Greeks to apply "their science". But they didn't have any full-blown science. Natural science in the sense that is relevant was founded by Galileo Galilei (1564-1642). He figured out the methodology to invent competing hypotheses and to eliminate the wrong ones by experiments (he first eliminated wrong theories about how marbles accelerate when they fall from the Tower of Pisa). You may quote other "fathers of science" such as Francis Bacon (1561-1626) but that won't change anything about the timing.

Ancient Greek Thales (620s BC-540s BC) was a father of "science" only to the extent that he recommended to avoid superstitions. But that is very insufficient to produce real scientific laws – which are needed for the steam engine etc. The ancient Greeks didn't know the parabolic trajectories of Galileo, Newton's laws, the quantitative concept of force, and even the temperature scales, among lots of other things (I am not even talking about electromagnetism let alone quantum mechanics, relativity, and string theory). The "pure scientific knowledge" was clearly the main thing that prevented them from introducing technologies of the modern era – and it is almost always like that. Idiots such as this retarded warrior against slavery never respect any science and how incredibly hard it is. They think it always exists and leftist activists who make it work for the people are the only hard thing!

How did the industrial revolution start, and it did so mainly in England? Do you remember James Watt (1736-1819)? He constructed the steam engine, right? Muscles were suddenly replaced with burning coal and steam. Was Watt – whose surname is used as the international unit of power today – a purely skillful guy who didn't need any insights from Newton and two centuries of physicists who were building on him? Don't be silly. Watt had to get – and did get – an extremely good education in mathematics and physical technology of his era.

Watt's father was a ship builder and ship contractor and James could have played with the ships. This shipwright's father, James' granddad Thomas Watt, was a teacher of mathematics, surveying, and navigation. His family had a direct access to the state-of-the-art STEM fields. Was James building on the science of ancient Greece? Well, Wikipedia makes it clear that he displayed aptitude for mathematics and no interest in Greek and Latin! ;-) Surely this relationship with mathematics was only a matter of James' childhood, right? No. He worked in his dad's factories but when those ran to business problems, James Watt left for Glasgow to build... mathematical instruments!

Then you see he was inspired by seeing a kettle boiling and started to play with steam and steam engines. But without the (nearly) state-of-the-art knowledge of physics, no one could possibly build such a thing. (Thomas Newcomen built an earlier steam engine that Watt has improved. Newcomen also had some science background, mostly from the things taught to priests, but it wasn't enough, his engine wasn't great, and the improvement from Newcomen's to Watt's engine took 1776-1712=64 long years.) A particular reason is that almost everyone who is illiterate in physics gets stuck in inventing various "perpetuum mobile" devices which just cannot work (just like physically illiterate 21st century people are excited by superluminal warp drives, cold fusion, loop quantum gravity, anti-Copenhagen "interpretations" of quantum mechanics, and dozens of similar pseudosciences). Watt knew what creates the power, the required watts to make things moving. Aristoteles just couldn't possibly complete these tasks. The ancient Greeks failed to understand not only the basic mechanics but also thermodynamics, chemistry, technologies to change the shape of iron, and many other crucial things.

I am convinced that most fifth-graders still do understand that the ancient Greeks didn't know the temperature, didn't have any pistons (1826... in the combustion engines), didn't understand the laws of thermodynamics, electromagnetism... and almost everything else that we count as physics, chemistry, and other natural sciences, so they could not have "applied" this non-existent knowledge. This commenter's stupidity is off the charts. But I am also almost certain that this kind of stupidity has become widespread and it is being tolerated if not encouraged. His teachers have failed to spank this bastard. And when he says a lie against slavery, he escapes the spanking lesson once again, every single day.

But it is not just the lack of education about the history, mathematics, and physics. He must completely lack any common sense. It is simply common sense that all scientific theories and technologies have their time and there are pretty good reasons why they didn't arrive centuries earlier. There are reasons – and these reasons are not just an insufficiently left-wing political leadership – why the cavemen didn't drive electric bikes and Homo Australopithecus didn't land on the Moon. The scientific and technological advances almost always depend on many other things. Sid Meier's Civilization games must have been very useful pedagogic instruments because they must make the players understand how science depends on a previous one – and some degree of overproduction or economic prosperity – and vice versa. Scientific and technological breakthroughs depend on others. And an excess of wealth (which often needs to be produced by brute force if not many slaves' drudgery) is needed for luxurious activities such as the scientific research that is needed for a higher level of luxury (and less back-breaking occupations) in the future, and so on.

Even if you haven't played Civilization, and if you have skipped your history, physics, and mathematics classes at the elementary school, you should have the common sense to figure out that ancient Greeks just couldn't have started a 19th-century-style Industrial Revolution – for the equivalent reasons that make it impossible for us to start the Industrial Revolution of the 45th century now. Almost by definition, we just don't have the technological know-how and scientific theories that will be understood in the 45th century (we don't even have a clue what those will be and how they could be named) – and by the time-translational symmetry, it is obvious that ancient Greeks didn't and couldn't understand most of the science and technological know-how that is important today.

In 2003, Michael Crichton, a late reader of this blog, gave a wonderful lecture at Caltech where he showed how preposterous it is to try to solve problems (such as the pseudoscientific "problem of climate change") 100 years in advance (and 100 is much less than 2000):

[...] Look: If I was selling stock in a company that I told you would be profitable in 2100, would you buy it? Or would you think the idea was so crazy that it must be a scam?

Let’s think back to people in 1900 in, say, New York. If they worried about people in 2000, what would they worry about? Probably: Where would people get enough horses? And what would they do about all the horseshit? Horse pollution was bad in 1900, think how much worse it would be a century later, with so many more people riding horses?

But of course, within a few years, nobody rode horses except for sport. And in 2000, France was getting 80% its power from an energy source that was unknown in 1900. Germany, Switzerland, Belgium and Japan were getting more than 30% from this source, unknown in 1900. Remember, people in 1900 didn’t know what an atom was. They didn’t know its structure. They also didn’t know what a radio was, or an airport, or a movie, or a television, or a computer, or a cell phone, or a jet, an antibiotic, a rocket, a satellite, an MRI, ICU, IUD, IBM, IRA, ERA, EEG, EPA, IRS, DOD, PCP, HTML, internet, interferon, instant replay, remote sensing, remote control, speed dialing, gene therapy, gene splicing, genes, spot welding, heat-seeking, bipolar, prozac, leotards, lap dancing, email, tape recorder, CDs, airbags, plastic explosive, plastic, robots, cars, liposuction, transduction, superconduction, dish antennas, step aerobics, smoothies, twelve-step, ultrasound, nylon, rayon, teflon, fiber optics, carpal tunnel, laser surgery, laparoscopy, corneal transplant, kidney transplant, AIDS. None of this would have meant anything to a person in the year 1900. They wouldn’t know what you are talking about.

It's terrifying that tons of people – who are clearly growing to become a majority and the group that has the political power – fail to understand these basic things, such as that "not all things are possible" and "various inventions depend on others and require quite some time to emerge", "we just can't use the science and technology from the future that is 100 or 2000 years away" and other things. Schools no longer teach valuable stuff. They are producing flabbergasting idiots such as this commenter who yells at Socrates for being too racist so that he couldn't build the smartphone. The left-wing semi-solid remains of food such as this commenter and the fudged-up teachers of his who failed to teach must be eradicated from our society, otherwise they will eradicate the society instead.