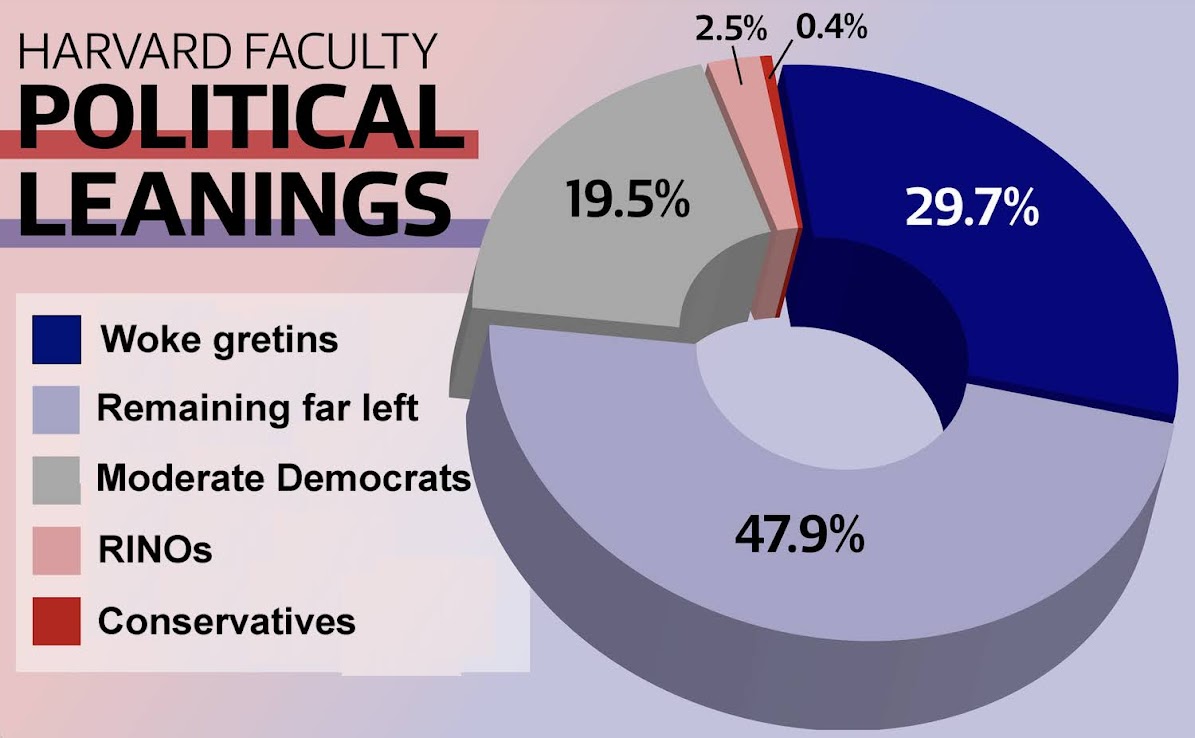 ‘An Endangered Species’: The Scarcity of Harvard’s Conservative Faculty

about the suppression of the people who understand the fundamental ideas of politics at Harvard – and other universities. The pie is quite shocking by itself and I believe that the labels that I added are way more accurate than theirs. Why? Because the people who slightly deviate from the hardcore leftist delusions of the (current) majority are being ostracized and their deviations are being exaggerated and amplified.

So when someone is called "liberal" as opposed to "very liberal", it means that he or she is a hardcore leftist loon who has "sinned" in roughly 2% of the "causes". When they say "moderate", they mean a "moderate Democrat". And I think that even their "moderate" label is just a trick in most cases – they just want to be interesting and look independent (I could name physics bloggers in that category). Most of the people called "conservative" are actually totally standard RINOs, Republicans In the Name Only. I knew one official in the physics department who was a textbook example of such "conservatives". Of course, he wouldn't be conservative in any way that mattered and I couldn't rely on him in anything at all. Finally, all the normal conservatives – that at least consider voting for Trump and who at least sometimes stand on the right side of Trump, as normal conservatives should (because he is a damn former Democrat and still has many leftist traits) – are called "very conservative".

At any rate, only 0.4% are truly conservative, 2.5% are RINOs, 20% are moderate Democrats, 48% are far left who have sinned, and 30% are hardcore woke whackodoodles who have never sinned against the most unhinged leftist orthodoxies of the time. It's not pretty. The article made it very clear that Harvard has done ZERO to increase the intellectual diversity of the workplace or the understanding of basic politics among the Harvard faculty – which is as low as 0.4%, as the numbers show.

The article mentions Harvey Mansfield, a scientist investigating manliness etc. ;-), as the canonical conservative Harvard professor. Gregory Mankiw, an economist professor, is quoted as a somewhat less obvious but still conservative Gentleman. Of course, I am familiar with these names – the number of similarly obvious names that could be enumerated is roughly 5 at all of Harvard. But I do hope that some departments, especially economics, do have a more reasonable atmosphere. These numbers are tiny – Harvard has over 2400 faculty positions (not counting doctors who are affiliated both with Harvard and with hospitals).

Mankiw also made the important point that the tenured professors really shouldn't have any reason to be afraid to share their views at all – this is one of the reasons why the institution of tenure was created in the first place. However, tenure-track faculty (which is the category where I belonged before I escaped from that terrible hell) are massively and constantly threatened and they are terrified of expressing their political views if these views happen to be wise.

Indeed, already those 16 years ago when the political atmosphere got tense in the wake of the witch hunts against President Lawrence Summers, I tried hard to find another assistant professor at that university whose overt political views held at least 20% of the wisdom of my views – and I have failed. It seems spectacularly obvious to me that the situation has gotten much worse in those 14 years when I was gone from the place.

Another good point is that only a small portion of the problems for conservatives are visible fireworks, catchy tense conflicts. What matters most of the time is the silence – and the nearby invisible ostracization of the rightwingers.

The degree to which the universities have been conquered by the radical left surpasses any example of the politicization of science and the Academia that you could have observed in Nazi Germany or the Soviet Union. It is absolutely unprecedented in the human history. I am almost sure that not even the Inquisition was this radical, ideologically uniform, and unfamiliar with the thoughts outside the cult. People with common sense and (more or less) conservative values who live outside the university environment say that the universities are an irrelevant hell. But that's wrong, it is just a wishful thinking. However defective the universities have become in politically sensitive issues, they still remained a key place that determines the direction in which the whole society evolves. If you are selling Mexican food or whatever you do, good for you but you simply don't have the same influence on the evolution of America as the average Harvard professor.

Dear conservatives or otherwise sensible people, you just need to care about this catastrophic evolution at the universities. A modern society really cannot exist without some intellectual elites, the leftists know it, and they have deliberately conflated the concepts of intellectual elites and the far left whackodoodles. They are completely different things – and in most respects, they are pretty much opposite things – but the leftists are doing everything they can to pretend that the concepts are equivalent and you are really doing nothing against this most devastating trick. When you dismiss the importance of universities as a whole, your denial is clearly helping the leftists because the universities are not inconsequential.

So please, do fudging realize that this is an important issue. And turn it into a big political topic and make sure that the universities regain some sort of sanity and the officially mandatory respect for the academic freedoms of the conservative scholars. Analogous comments hold for the "mainstream media" and "Big Tech" (two other categories that are sources of the far left pressure on mankind), too. As long as it will be obvious that they have some meritocratic (e.g. purely technical) advantages that often make the neutral or right-wing competition look inferior (and I repeatedly think that Parler is self-evidently inferior to Twitter, for example), it will be a huge problem that most of these companies have become far left and your denial of their influence (which is just your excuse for not moving your aß) only makes things worse.

Florida is preparing a bill whose task is to tame the indoctrination and revive the (mainly) conservatives' freedom of viewpoint.