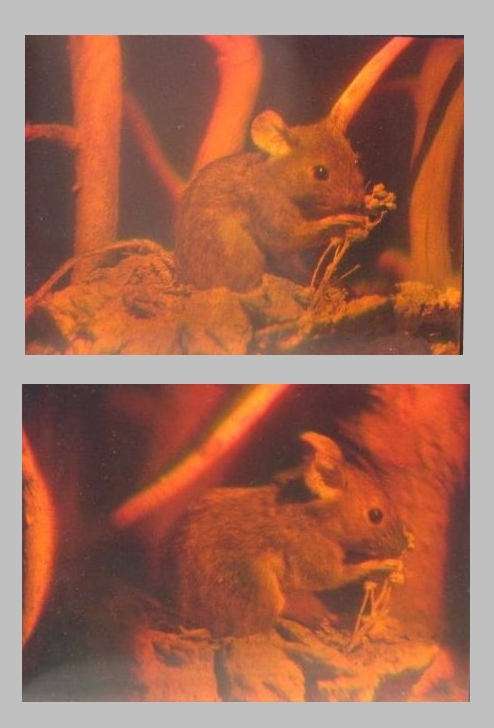 You may really look at the mouse hologram from different directions.

The holographic principle states that a theory of quantum gravity is secretly hiding the information about (spatially) 3-dimensional objects in a plane ("photographic film" or "holographic screen") that is just (spatially) 2-dimensional i.e. whose dimension is lower by one.

In both cases, the information about the extra dimension, the "depth of a point", is encoded in the typical wavelength of an interference pattern that appears on the screen. In some generalized sense, dinograms or stereograms do exactly the same but the holograms can really store the information even about points that are overlapping each other, not just about the "closest layer".

Let's try to explain how the image of a 3D object such as this mouse is encoded in a hologram a bit more quantitatively. We will need a coherent source of light which has the precise (angular) frequency \(\omega\). A laser. Dennis Gabor, a powerful Hungarian theorist, invented the holograms in December 1947 but the lasers only emerged as "real things" in 1960 and it took a few years for the holograms to be made, too. Gabor got the 1971 Physics Nobel Prize.

Fine, holograms have something to do with the wave properties of light. We require the light to have a fixed frequency i.e. fixed color which is why the basic hologram will be monochromatic. We may pretty much say that while the hologram "gains" one extra dimension of space, it "loses" another dimension, namely the information about the intensity of individual colors.

However, three holograms on top of each other, red-green-blue, are enough to emulate the color spectrum for the eyes that can only distinguish the three #RRGGBB intensities of colors, not the full function \(I(\omega)\). And three infinitely thin films are still close to one 2D image than to one 3D object.

Coherent light is an electromagnetic wave and each electromagnetic wave can be Fourier decomposed. It is a linear combination of plane waves\[ \psi_{\vec k}(x,y,z,t) = \exp[i(k_x x+k_y y + k_z z -\omega t)]. \] Because the waves are moving in the vacuum which will be enough for us (at almost all times), the phase velocity and the group velocity are \(c\) which means that \(kc = |\vec k| c = \omega\). The electromagnetic wave is a transverse wave: the direction of motion \(\vec k\) is orthogonal to the electric vector \(\vec E\) and the magnetic vector \(\vec B\) and the latter two are orthogonal to each other, too. In 3+1 dimensions (three spatial, one temporal one), there are two polarizations (e.g. linear \(x,y\) polarizations) of light. It means that the most general monochromatic wave is written as \[ (\vec E(\vec x,t),\vec B(\vec x,t) ) = \sum_{\lambda=1}^2 \int d^2 \Omega_{ \hat n} A_{\lambda,\hat n} (\vec E_{\lambda,\hat n},\vec B_{\lambda,\hat n}) \psi_{\lambda,\omega \hat n / c} \] The detailed distribution of light is encoded in the amplitudes \(A_{\lambda,\hat n}\) where \(\lambda=1,2\) labels which of the two polarizations we consider and \(\hat n\) is simply a unit vector that belongs to the sphere \(S^2\) and that's why we integrate over this variable or over \(d^2\Omega\). For each of the direction \(\hat n\) and the polarization \(\lambda=1,2\), there is some electric field, some magnetic field (which are orthogonal to \(\hat n\) and to one another) and \(\vec k = \omega \hat n / c\). The length of the vector is completely determined by the frequency (i.e. by the wavelength) so only the direction is variable!

Again, we reduced the dependence of \(\vec E,\vec B\) on four spacetime coordinates to the dependence of the complex amplitudes \(A_{\lambda,\hat n}\in\CC\) on two coordinates in \(\hat n\) – which may be parameterized as \(\theta,\phi\) – because the electromagnetic field we consider is time-independent (a static image); and because the frequency is fixed. For each of the two polarizations, there is some plane-wave solution to the wave equation \(\psi\) that we wrote before; and some choice of the electric and magnetic vectors.

The polarization of the light isn't essential. You may very well imagine that we are Fourier-decomposing just one particular nonzero component of the electromagnetic field, e.g. \(E_x\), and the remaining components of the electric and magnetic vectors are determined from it in some way. This comment is just to prepare you for a simplification that we will make. Instead of dealing with two polarizations which affect 6 components of the electric and magnetic field strength vectors, we will only deal with one polarization and a scalar field \(\Phi\) which you may imagine to be "the same thing" as \(E_x\). Excellent. So how will the hologram composed of the scalar field work?

Here I posted the Wikipedia image of the situation in which the hologram is being created. In the upper left corner, the coherent light is coming from a laser to the right where a beamsplitter splits it to beams going to the right or down. The beam going down is simply reflected from a mirror where it reflects and becomes the "reference beam". The other beam illuminates the mouse which partly reflects the light to the same photographic plate. That is where the object (mouse) beam and the reference beam interfere with each other and create an interference pattern. The intensity of the interference pattern at each point is recorded as the darkness of the photographic film.

Note that the object beam may be Fourier-decomposed according to the formula above and is encoded in the Fourier components \(A_{\hat n}\) where the direction \(\hat n\) is variable but "approximately" from the mouse to the photographic plate. However, this beam interferes with the reference beam whose \(\hat n\) is completely fixed (the beam is a plane wave so \(A\) is a multiple of the delta-function in the direction space).

It is not quite needed but let us assume that the overall intensity of the reference beam is much greater than the intensity of the object beam. At a given point \((x,y,z,t)\) of the photographic plate (the time doesn't matter), the squared intensity is\[ |\psi (x,y,z,t)|^2 = |\psi_{\rm ref} + \psi_{\rm obj}|^2 \approx |\psi_{\rm ref}|^2 + 2\,{\rm Re}\, \psi^*_{\rm ref} \psi_{\rm obj}. \] I neglected the absolute value of the object beam because it's much smaller than the last term that I kept which is the real part of the mixed term (if you don't neglect it, it has the capacity to at most create another annoying image in a different direction). Also, the absolute value of the reference beam is constant all over the photographic plate and won't affect the darkness variations. So it is only the mixed term that matters for the darkness and the interference pattern\[ 2\,{\rm Re}\, \psi^*_{\rm ref} \psi_{\rm obj}. \] Let us redefine the phase at each point so that the reference beam has a "positive real phase" at each point of the photographic plate. With this choice, the darkness is dictated by \[ 2 \,{\rm Re}\, \psi_{\rm obj}, \] the real part of the "object beam" wave evaluated on the photographic plate. That's nice. Recall that the object beam is Fourier-decomposed into the amplitudes \(A_{\hat n}\) where the direction \(\hat n\) is variable and approximately going "from the mouse to the film". What does the real part do to the complex coefficients \(A_{\hat n}\)? It's simple. The real part simply replaces a particular \(A_{\hat n}\) with \(A_{\hat n} + A_{-\hat n}\), with the Fourier coefficients in the original direction and in the exactly opposite direction. The addition of the "opposite \(\vec k\)" or "\(-\vec k\)" won't damage the hologram because when we're standing on one side of the hologram, we only see the waves with the right sign of \(k_z\) where \(z\) is the axis orhotgonal to the film, anyway. So the real part (which came from the squared absolute value) doesn't really matter at all.

Fine, we already have some interference pattern encoded in the intensity or darkness \(I(x,y)\) along the two directions of the photographic plate and we have good reasons to think that this interference pattern remembers the whole object beam as encoded in the complex amplitudes \(A_{\rm obj}(\hat n)\) where \(\hat n\) is roughly going from the mouse to the film. What happens if we illuminate this film with the reconstruction beam?

The reconstruction beam is coming from the same direction as the reference beam that was used to create the hologram. The intensity \(I(x,y)\) on a given place of the hologram is multiplying the incoming electric (and therefore also magnetic) fields. However, now the photographic plate is transparent and the laser light is allowed to continue to go to the viewed, in the downward direction.

The virtual image will be seen by the viewer if the electromagnetic light beneath the hologram is going to be the same as it would be in the first picture (when the hologram was being created) if the object beam had been just allowed to continue to go to the viewer.

And is that true? You bet. The funny thing is that the field \(\psi(x,y)\) defined as a function of the two dimensions of the hologram is basically enough to fully reconstruct the field \(\psi(x,y,z)\) at each point of the half-space (and each moment of time). Why is it so? It's because, as we have already emphasized, the Fourier coefficients \(A_{\hat n}\) only depend on the direction of the electromagnetic wave \(\hat n\). The plane waves calculated for different directions \(\hat n\) are linearly independent. And it is almost true even on the plane of the hologram, assuming the plane waves with a fixed \(|\vec k|\) only. The only exception is that the component of \(\vec k\) that is orthogonal to the hologram may flip the sign (which changes neither the plane wave's profile in the plane of the hologram, nor the length of the vector \(\vec k\)). That is why the coefficients \(A_{\rm obj, \hat n}\) can be extracted from the hologram \(I(x,y)\), up to an overall phase, and up to some mess that appears for uninteresting, opposite directions \(\hat n\) (that's the harmless effect of the "real part" business).

There are just a few possible bugs that you need to investigate if you want to do high precision holographic engineering such as the 2 or 4 images coming from the various directions \(\vec k\) (4 images may exist because \(\vec k\) may have the overall sign flipped, and independently of that, the component transverse to the hologram's plane may be flipped); the effects of the terms quadratic in \(\psi\) i.e. the failure of the linearization; the effect of the two polarizations, and a few more details. But otherwise the hologram has to work.

The point is that the dependence of the "intensity of sources" on the third, holographically subtracted direction (the distance of a source from the hologram) may be eliminated because this depth is stored in the information about the "typical spacing of the interference pattern" instead. The very same encoding works in the holograms of quantum gravity, too.

I don't plan to proofread this text, sorry.