Google censorship: Some creatures harbored by that company have sent me an "order" to erase this text about the fundamental biology because it has to be "fixed" ("Yes"). I moved the essay to another website. These creatures have to be tried for crimes against humanity.

In 2018, Mutti Angela Merkel finally revealed that she wouldn't run again to be the CDU boss and German chancellor after the 2021 elections. She has been the boss of the CDU since April 2000 and the Chancellor from November 2005. Putin is sometimes criticized for his long reign but you may see that the difference between Putin and Merkel is modest in this respect and the selective usage of this talking point against Russia is pure racism. 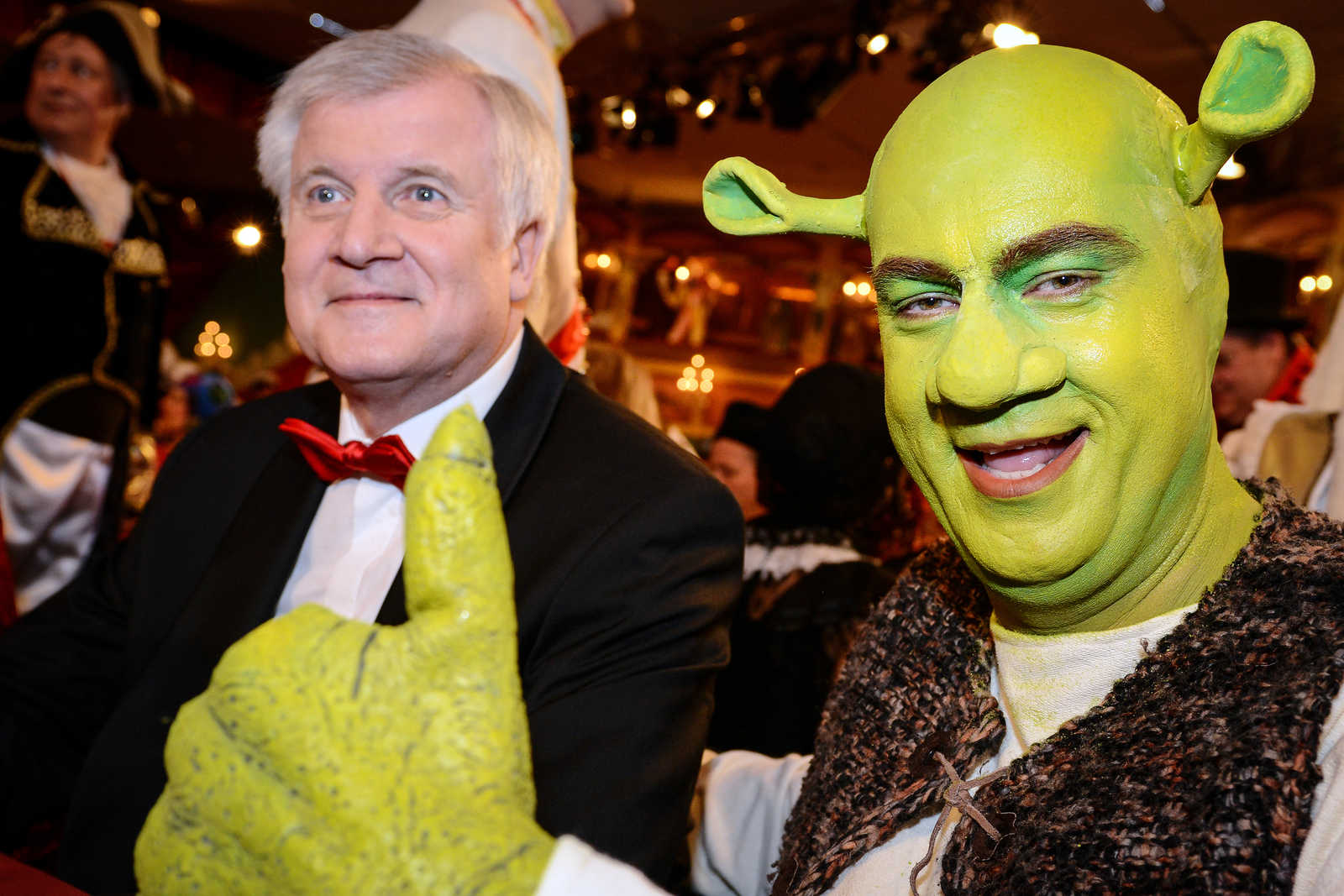 For quite some time, the leftist media have served a simple story about the future to their undemanding readers and viewers. Merkel would be obviously replaced with AKK, a woman whose name is hard to remember, an even more pro-leftist lady. Let's say that the acronym stands for Analfabertruda Krappen-Krankenhausen. However, in February 2020, she revealed that she just wouldn't run.

A year later, we have two male frontrunners: Armin Laschet and Markus Söder. Laschet is the current minister-president of North Rhine-Westphalia, the broader "true Germany" of the Muslims and a Bundesland with the highest number of citizens, around 17 million. Söder has the same job in Bavaria which has about 13 million people.

CDU-CSU should better pick their candidate for the chancellor of Germany before the Sunday, September 26th, 2021 federal elections.

The men are substantially different. Laschet is expected to bring a continuation of Merkelism although I do believe that things would be saner than during the reign of the actual Merkel. On the other hand, Söder seems to be closer to the Austrian Chancellor Sebastian Kurz. And that resonates with me – and most Czechs.

On the picture at the top, Söder is the man in the Shrek costume, the other guy is his predecessor Horst Seehofer (who was the Bavarian minister-president in 2008-2018). Söder also likes Star Wars. Pictures outside the Shrek paradigm exist, too. Söder is a natural opponent of mindless mass migration – and he has previously teamed up with Kurz. He is Bavarian and most Bavarians (like most Austrians) are Catholics but Söder is actually a Protestant (a branch of the church that is associated with Northern Europe and with Southern or "Confederate" U.S., the regions where the people tend to work hard – Protestantism is Christianity for the hard workers who have no time for Catholic BS idols and formalities, sorry, dear Catholic readers).

Some two years ago, Söder also urged Germans to abandon their plan to destroy the atomic nuclei and their energy in Germany by the end of 2022. Germany has 20 months to shut down the remaining nuclear power plants – this destructive plan arose from their hysteria after Fukushima – which are currently generating some 15% of Germany's production – the expected drop is huge and you may want to buy the stocks of ČEZ for this reason. Well, note that Kurz has changed nothing about Austria's being a country free of the atomic nuclei so Söder could be better than Kurz in this respect.

While he was dismissed by the leftist media as a populist LITE, he ended up being highly organized and sort of restrictive during the coronavirus games. I wouldn't call him a Coronazi, however, and I am pretty sure that he wants to dismantle all the restrictions rather soon. At any rate, there are various questions in which Germany could start to move in a more Austrian direction and that should mean a significant improvement.

Bavaria is the "Texas of Germany", if you don't get it, the most likely Bundesland that would secede from Germany if someone would. The pride is analogous to Texas. Bavaria has obvious ties with Austria which are much stronger than the generic German-Austrian ties. In 996, Austria was reorganized as a "margravate" of Bavaria. (A margravate is a quasi-colony led by a margrave, a military-type aristocrat. Moravia was also a margravate which means that Austria was Bavaria's Moravia much like Moravia was Bohemia's Moravia LOL.) Today, Bavaria is just a Bundesland while Austria is a sovereign country but historically, Austria was just a Bavarian colony of some sort. 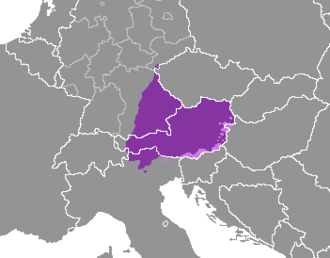 The map above shows the speakers of the Bavarian language (up to 1945, the violet color continued up to the Southern Sudetenland in Bohemia and a strip in Western Hungary, the expulsion changed it). Almost everyone in Austria speaks it; and the adjacent 1/2 of Bavaria does it, too. It is close enough to Standard German to be considered a dialect but it is officially considered a separate language. It's amazing but almost all the people in Austria and this 1/2 of Bavaria are automatically bilingual because they speak both Bavarian and Standard German (and they "code-switch" in between the two languages just like many Indians switch between Hindu and English – I do find this behavior kitschy). The languages are sufficiently different so that you can't really pretend to speak Standard German if you speak Bavarian! I can only vaguely hear that Bavarian isn't quite German – but the distance from German is obviously much smaller than e.g. the Dutch-German distance.

Söder is the chairman of CSU which is the Bavarian counterpart of CDU. Under some circumstances, CSU would be just the Bavarian branch of the CDU but it isn't quite so. Bavarians are special. CSU differs by more than just the name, it has different attitudes to many issues.

My uncle (dad's brother) and his family emigrated to Nuremberg, Bavaria in 1980. I've been slightly exposed to the Bavarian life and politics for some 40 years. Note that Czechs have been dependent on Bavaria or Austria for a majority of recent 11 centuries. In the 9th century, Great Moravia adopted the Orthodox belief through the missionaries, Cyril and Methodius. It was in 863. But already whopping 18 years later, in 845, 14 Czech princes and their companions and staff were voluntarily converted to Catholicism in Regensburg, the Upper Palatinate, Bavaria, the current twin city of my hometown of Pilsen. You won't find this kind of servility towards the neighbors' beliefs elsewhere in the European history, I believe. The Archbishop of Regensburg was the intermediate apparatchiks between God and all Czech Catholics up to the moment when Prague got its own, separate Archbishop in 1344 (Prague has had a bishop since 973). OK, it isn't quite accurate. Due to the internal power shifts in Germany, Bavaria lost that position and Czechia was leaving the territory of the Archbishop of Mainz, Rhineland-Palatinate, in 1344. Skipping two centuries, the Austrian House of Habsburg acquired the Czech crown in 1526 and they kept it up to 1918. 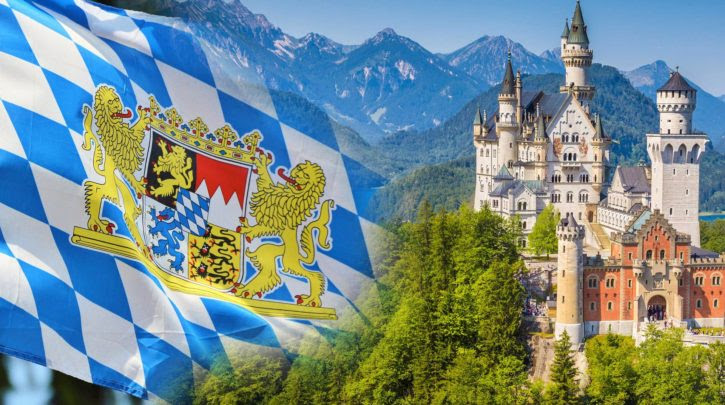 Our region is a beer region. Bavaria and Bohemia are siblings in this respect. I think it is no coincidence that the names Bohemia, Bavaria mean almost the same thing – and this fact has something to do with the beer, too. Bohemia is "the home of Boii" while Bavaria is something similar, perhaps "the outhouse of the Boii". Boii came to our region about 500 years before Christ. They were a Celtic tribe and I would believe that they were already drinking something like beer – and both Czechs and Bavarians actually got this hobby from the Celts. This theory is supported by the fact that the Irish folks are pretty decent with their Guinness and similar liquids, too. Both Bavaria and Bohemia have (a) lion(s) in their coats of arms.

At any rate, if Söder – that is described as a "heavyweight" candidate by the Czech media – happens to succeed Merkel, I do think that the uncontrolled, insane drift of Germany towards the far left and self-destruction will gradually stop. Merkel and her alleged political abilities have been praised, worshiped, and lionized by many kinds of people. But at the end of the day, I think that Germany went in this extreme left-wing direction exactly because Merkel has actually been an immensely weak leader. She's been a tool of the people who were the loudest. At the end, many of the decisions looked like hers but she was really forced by someone else to adopt all these decisions. She has been a lady without a spine and without an ideological compass, a product of the Zeitgeist. (I think that the same actually held even for Adolf Hitler. He wasn't an original creator of some brilliant evil. He was just a messenger between the power in Germany and the desires and rants of the most ordinary and median yet loud politically active ordinary citizens.)

I would expect Söder to be different. I think that unlike her, he can say a clear Nein to the Greens when it comes to many sick dreams of the moldy party (he said that as a coalition partner, the Green Party looks like der Seireit). And his "No" will be even more audible if he says it in Bavarian: "Naa"! ;-)