Due to the utterly sensible, relaxed approach of the common folks, Czechia has had the highest number of Covid-19 per 100,000 people in the whole world. The graph of new positive PCR tests per day looks like this:

Click the picture to zoom in (source). A nicely natural function, right? On the left side, you see a slight elevation which we considered the first (Spring 2020) wave (no excess of deaths existed at that time). The real Covid epidemics only started in October 2020 or so and this main wave has been composed of 3 subwaves. At least the last one exists mainly due to the new variants of the virus (especially one having a higher R0; but also a variant partly circumventing the previous immunity).

While the highest number of deaths per day (above 250) occurred in the "first subwave among the three" (in early November), the all time peak of cases was 17,770 new cases on January 6th (the middle subwave among the 3); the peak of the last subwave occurred on March 2nd, 16,779 cases. (These rates translate to slightly above 2,000 per 100,000 in a week, i.e. during these peaks 2% of population were newly proven to be infected within 7 days – and many more than 2% "got it" without a PCR test, in just a week.) Since the early March, the positive cases were dropping, as you see with hindsight, and I saw it very clearly at least since mid March. On April 7th, I wrote a blog post similar to this one, pointing out the obvious fact that the Covid epidemics was ending in Czechia – and almost all of Europe and North America. That post also had a version of the graph above – where some 6 weeks were still missing. The quasi-exponential decrease was damn clear in early April and it is even more clear now. But deniers of this self-evident exponential shape still exist – even among top public health officials – which is stunning.

Technically, we already reached the herd immunity in March (and when it comes to the original variant of the virus, in early January). That term doesn't mean that the infection rate is zero; it means that it is statistically guaranteed that it would decrease towards zero because the number of people who are already immune is high enough to make the disease shrinking. At this moment, we have 50 new infections per 100,000 people in 7 days. This number has been quasi-exponentially shrinking for 2+ months now. The halving time was 2-3 weeks in March as the R0 was just slightly below 1. But R0 kept on decreasing up to 0.69 today – which is a very fast decrease, indeed.

All the evidence indicates that this R0 will continue to be this low or it will be even lower. At the current rate, the halving time is closer to 1 week than 2 weeks. I deliberately phrased this sentence a bit vaguely for you not to forget about the error margins (and to realize that the precise numbers don't really matter for the qualitative conclusions at all). But I could calculate the precise duration of the halving according to the current conditions. 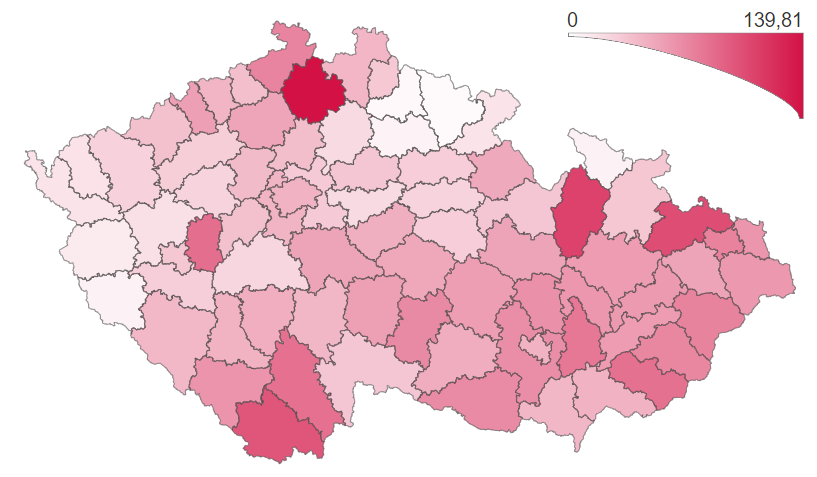 These fresh map shows the 76 districts of Czechia plus 1 Prague, colored according to the 7-day new cases count per 100,000 people. Only the 3 districts in the North, Česká Lípa, Šumperk, Opava, are above 100 per 100k. Five white districts are already below 10 per 100,000: Domažlice (Southwest Bohemia); Trutnov, Semily, Jičín (a cluster of 3); Jeseník (North Moravia). This fraction really means that some 5 or so people in the whole district are positively tested in a week. At these tiny numbers, it becomes easier to catch their contacts. The percentage of positive PCR tests also dropped towards 3% again (the peak was above 50%) and the easier tracing is yet another reason (aside from the warm weather and increasing immunity, also due to vaccination) why the doubling time is getting shorter. Many of the positively tested people are probably the "people who were really sick weeks ago" and from whom the recently infected people got it a bit later. 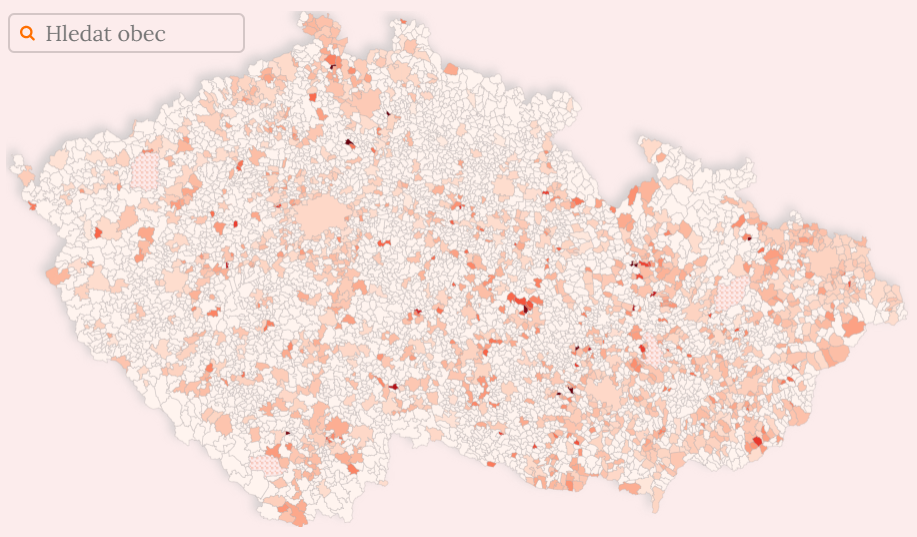 This is a map of the Czech municipalities (source). You can see that a clear majority of the villages (plus some smaller towns) in the country have had exactly 0 new cases in the recent 7 days. Recall that the average is 50 new cases per 100,000 people now – per a city of the size "half Pilsen" (like Liberec, Olomouc, Budweis, Hradec Králové, Aussig). Towns that have 10,000 people have 5 new cases in average and with some downright fluctuation, you get 0 (surely Cheb with its 32k people had 0 in the recent week; Cheb got a great and solid herd immunity already in January).

In the morning, I was stunned to read that Ms Pavla Svrčinová, a top-tier public health official, believes that the last loosening of restrictions is not in sight. Why? Because the decrease of the epidemics is "slowing down" and we may only get to 25 per 100,000 and 7 days in the "late summer". Wow.

This lady must have some university degree for this job. How can she say something so incredibly stupid? I would surely refuse the tutoring of a schoolkid who is this unbelievably hopeless. It's been clear for months that the halving of the number of new infections takes 1-2 weeks and it's closer to 1 week now. The quasi-exponential decrease was actually speeding up, and not slowing down, in the recent 2 months. And there are numerous reasons for this speedup (growing natural immunity, growing immunity from vaccination, warmer weather, easier tracing when the numbers are small). So of course, the country will get below 25 per 100,000 in 1-2 weeks, too (and very soon, a majority of our cases will be imported again). 25 will materialize in the very late May or early June, surely in the spring. Her guess is... late September, whopping 4 months or 16 weeks later.

How can someone who is an epidemiologist in chief solve this trivial math problem for children (the graph at the top looks like a textbook graph of the exponential decrease) – when will the number 50 drop to 25 when we see the halving each 1-2 weeks – and instead of the correct answer, 1-2 weeks, she responds with 17-18 weeks? It is just absolutely stunning.

Maybe she is not this unbelievably moronic, she is "just" lying because she wants to be "important" for 4 more months – and her "importance" (which also has financial implications) depends on the restrictions of the basic freedoms and civil rights of 10.7 million people and hundreds of thousands of businesses that they operate. It's hard to say whether similar Coronazis are just shockingly stupid or shockingly dishonest. This type of disturbingly low-quality people has overreproduced and it can be found everywhere. Although I am working hard to eliminate them, deniers of the herd immunity still keep on appearing from somewhere. We must use much more assertive weapons to eliminate these creatures than we did so far.
Update June 3rd: In the today's morning report (with yesterday's numbers), the per-100k, per-7-days number of new cases was 24.58, below the last policy threshold of 25. It took 12 days, exactly between 1 and 2 weeks, as I wrote on May 23rd. I was totally right, she was proven totally wrong. She didn't have the slightest chance. There wasn't any subtlety at all. The crash of Covid clearly continued by the exponentially drop with the halving time around 12 days. I could have probably calculated the number 12 with the error margin of 1-2 days but it's not really important. What's important is that we are led by braindead creatures who confuse 4 months and 12 days.