...and the National Academy of Sciences... 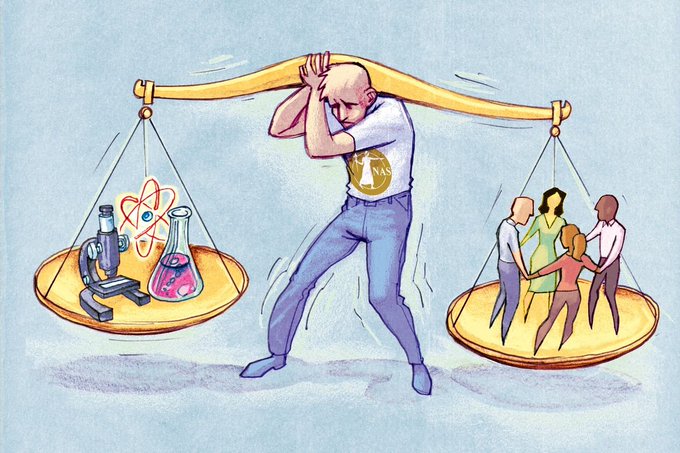 A picture from the article we discuss. You may click to have an idea about the woke people's discussions on Twitter.

Tom W. has sent me a link to this essay by cosmologist Lawrence Krauss (a noted atheist activist and one of the people who saw the light about the looming discovery of the cosmological constant before it was seen in the 1990s, among other things) in the Wall Street Journal:

While Krauss has looked like another left-wing scientist-activist for decades and the WSJ is a RINO daily, I think, this almost sounds like a sane person's or rightwinger's alarm. Krauss points out that much of the funding ($7 billion) for physical sciences comes from the Department of Energy. He complains both about the Biden Administration and the National Academy of Sciences because they seem to be in the process of politicizing and ruining science – I would add, along the lines of the Aryan Physics in Nazi Germany and Lysenkoism in the Soviet Union. Unlike Krauss' insights about the cosmological constant, this observation didn't exactly come "in time"! ;-)

OK, the problem is that a senile puppet (my words) has unsurprisingly chosen an intersectional candidate (which means a person who shouldn't be there but who is politically convenient at least for 2 reasons) to lead the Office of Science, an important enough job controlled by the White House. The nominee, Asmeret Asefaw Berhe, is at least triply intersectional because You may check Google Scholar and you will see that she is a soil biogeochemist at the University in California, in Merced. I have spent 2 times 6 months in California but I still have no clue about the existence of a thing called Mercedes in the singular number. OK, now I looked that the population is half a Pilsen, I don't care about random faraway šitholes of this magnitude. ;-)

Soil and human security in the 21st century is her most cited article which was written by a team of six co-authors. As far as I can say, it is a classic "the fall is falling, the soil is eroding, everything is due to the SUVs, we are doomed, let us add a few maps and diagrams" kind of crap that a manipulated, overly ambitious, semi-intelligent high school student may write as a term paper. I don't plan to spend more time with this paper or other research of hers or similar people because I am pretty much certain that it is a waste of time.

At any rate, if confirmed, she is bound to shape science in the U.S. – to promote identity politics and soft sciences (while the hard sciences that were almost entirely built by the "previously privileged" [because intellectually superior] groups that are turning into the Jews in Nazi Germany will obviously be suppressed) – and Krauss is clearly among those who start to see a problem. How many physicists are willing to speak at least as much as he? And: Isn't it a "little bit" too late? Like 17 years too late?

Even if we only look at this website, I've been warning about this ongoing and accelerating destruction of science by the New Left since 2004 – for almost seventeen years. I was exploiting my genuine experience with pretty much 2 totalitarian regimes in Central Europe (and lots of experiences from the contemporary scholarly environment). In recent years, the contamination of the university and science environment has become so shocking (and incredible news of the summit.news type became a "several per hour" phenomenon) that I got used to it, surrendered, and I think it is pretty much a waste of time to observe the things. You should have acted earlier – many years earlier. But you just didn't have the spine and morality to fight against the anti-scientific, dishonest, woke junk and the affirmatively actively selected waste that came to represent "science" that has nothing to do with science. You have always preferred your comfort over what is right. You have done literally nothing to defend the people like me who became the first victims of this new totalitarianism that seems more insane than the previous ones. I can enumerate pretty much all of you – and you surely know how much I despise all of you by now because your moral failure has been (and still is) much greater than the moral failure of any physicist who worked in Nazi Germany.

I am really curious what you want to do now when this crap is pretty much controlling all federal political and science-related bureaus with power in the U.S. – and similarly in other countries that used to be known as the West.