At night, a big tornado has appeared in the Hodonín area (near border of the Hodonín and Břeclav districts, see Mapy.cz), South Moravia (Moravia is the historically distinct 40% of Czechia in the East). You should check some videos including this viral one or at least the Google Images. Several people have died, hundreds were injured, some six villages were partly destroyed, especially the village name Hrušky (Pears), one-half of the Hodonín zoo was flattened, some hundreds of cars may be gone, and more. My sympathy to the affected ones. If you want to send some money to relevant charities, as I did, I can give you some coordinates (e.g. explain the DMS).


The driver at the beginning got the idea to put the car in reverse. The narrator uses several justifiable obscene words but the Moravian dialect is otherwise so formal, especially because they avoid the informal Bohemian endings of the adjectives (Moravian dialect and formal Czech: Tornádo je vysoké. Bohemia: ... vysoký).

As Wikipedia can tell you, a tornado is a rotating column of air which often damages things. The intensity is measured by the (updated) Fujita scale. The Czech tornado may have been F2 but it may have been F3, too (80% of U.S. tornadoes are at most F1 but there are F4s, too) and an expert named Michal Žák talks about F4 (300 to 400 km per hour). Update: Dagmar Honsová says that the speed didn't surpass 219 km per hour, so it is far from an F4. The Southern U.S. get many more tornadoes than all of Europe combined. The reason is that North America is a large continent with no mountains separating North and South.

In the absence of such mountains, the air may go in the directions between the North and South and achieve higher speeds, statistically speaking. In Europe, we have many mountains separating the North and South, especially the Alps but also the Carpathian Mountains. 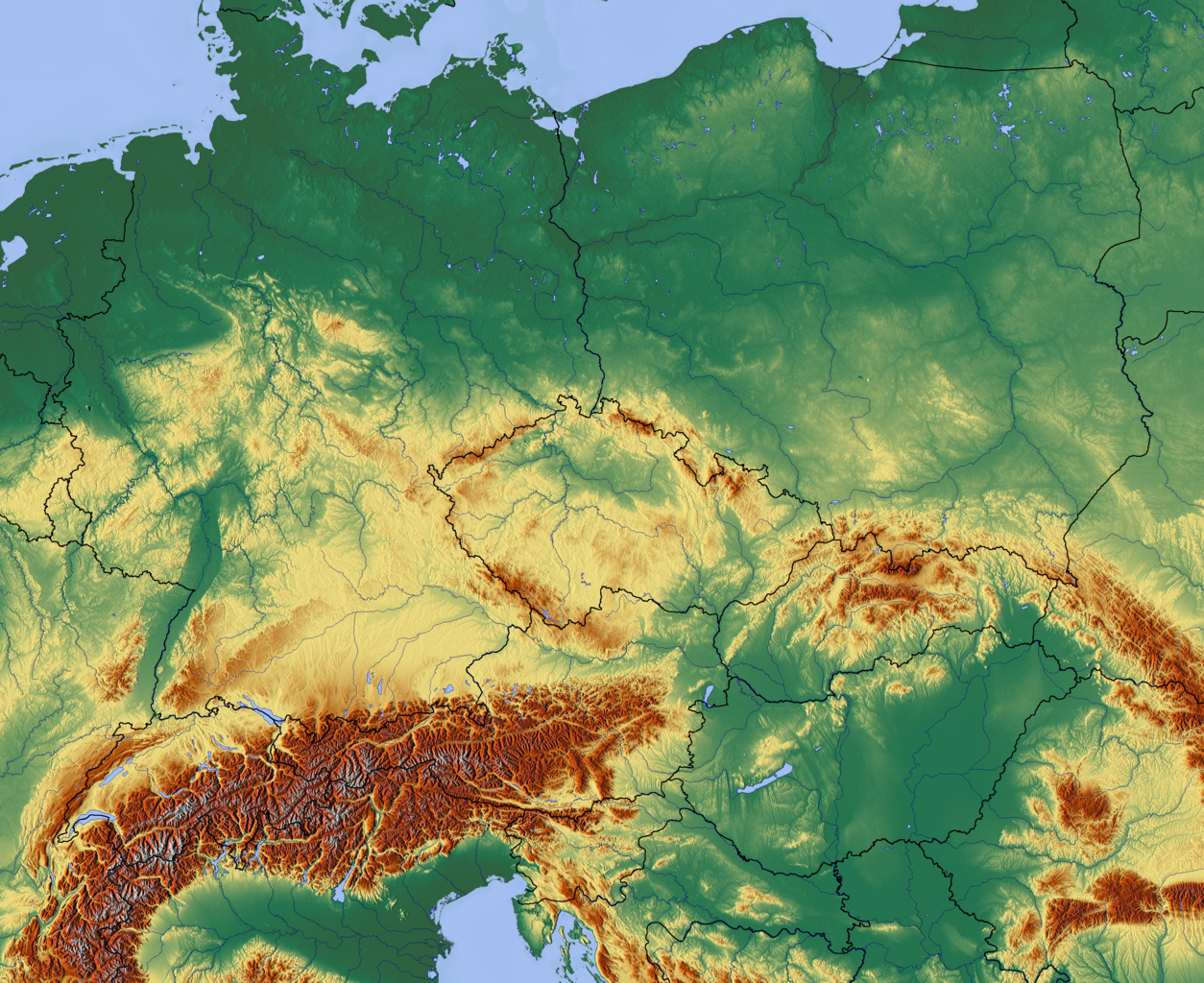 Most of the European tornadoes occur in Northwestern and Southeastern Europe. On the picture above, the brown rectangle in the lower left corner is the Alps. The green area between the Alps and the Tatra Mountains which are in the Northeast from the Alps includes the affected region. You might say that the area is close to a quasi-vertical line without mountains that goes from Bosnia all the way to North Poland.

But tornadoes haven't been absent in Czechia. Chronicles describe hundreds of them. According to the prose, the most devastating one occurred in 1119 AD. Well, maybe it wasn't necessarily the most devastating one intrinsically but the place may have played a role in its fame. That 1119 tornado has largely destroyed the Vyšehrad, the Castle plus structures around on the hill on the opposite side of the Moldau River than the Prague Castle.

The history hasn't ended, the atmospheric physical phenomena hasn't ended, pretty much nothing that has existed for billions of years has ended. This simple statement seems very hard to understand for the "progressives", brainwashed, uneducated, and spoiled brats who believe that they are living in a brave new world without risks, without destructive weather events, without positive and negative emotional ties of the people and various nations, and without opposition to unusual sexual practices, to name just a few. Sorry, snowflakes, these things are permanent, they are here to stay. It is your ephemeral "culture" and perhaps your lives that are not here forever.

Meanwhile, it is massively raining even here in Pilsen, Western Bohemia, but the wind is almost zero. After a month of intense precipitation (in a year of above-the-normal precipitation), we enjoyed the hot and rainless week in the last week but the raining has returned this week. So much for the fairy-tales about the once-in-2000-years drought.

The victims describe the events as 5 minutes of Armageddon and then it was over. You may see that they woke up to a pretty sunny day. All those roofs on the road are less pretty than the blue sky, however. You may also see 127 photos of the devastated cars and structures, mostly (but not only) roofs.