All true Europeans root for Hungary, a beacon for our values and a target of an insane PC jihad

Because the moral integrity of the children is under an increasing attack through the exponentially growing indoctrination by lies, the decadent culture, and anti-Western sentiments spreading in the countries that used to be called the West, the nations where the sane majority keeps their control over the essential events need to increasingly protect themselves.

Sometimes along with Poland, Hungary became the Old Continent's main fortress that defends the European values – much like half a millennium ago when Polish and Hungarian troops were the most important ones who protected Europe against Turkish (and Islamic) invasions. The most recent bill that Hungary has easily adopted has a simple basic purpose:

It became illegal to show homosexual or transsexual content to minors which applies to explicit visual content as well as content that would promote these sexual orientations and habits.

The Czech prime minister apparently finds this sentence too complex so he has announced that he will need to talk to Viktor Orbán for some time in order to understand it. You're not exactly a thinker-in-chief, Mr Babiš, if you really don't understand what is going on.

As explained by the very quote above – or by numerous additional explanations that you may read e.g. at Hungary Today, the law obviously doesn't suppress any vital rights of any citizens who are 18 years old or older. Instead, the bill is protecting the Hungarian children from indoctrination and from a psychological or moral damage.

When I was a kid, homosexuality was still somewhat taboo officially – although it was obviously completely common to discuss these issues in private conversations (and some "avant garde" programs started to be aired on TV during perestroika, e.g. those with Radek John). But if you only listened to the most standard programs at the official media etc., you (assuming you were straight) could have never learned whether the homosexuals really existed, what their percentage was, and many other basic things. Well, when the HIV virus became successful, the discussion about the gays strengthened a bit. But transsexuals were never talked about, and if they were, certainly as a rare disease of a sort. And it was basically right.

Some rights of the homosexuals were violated by the communist regime and Viktor Orbán rightfully reminds us that as a young leader of the anti-communist opposition, he fought for the homosexuals' rights and he has actually won this heroic fight, along with many others. It is really insane when some overpaid, useless, hypocritical apparatchiks from the EU who have never achieved anything that is remotely comparable to Orbán's achievements may dig enough dishonesty and arrogance somewhere to claim that exactly Victor Orbán is some sort of an anti-homosexual bigot. They should be imprisoned just for these disgusting libelous lies.

Nightwork (led by Vojta Dyk), 2008, "Global Warming" (a slang word for gays in Czech). Czech, French, and German editions exist, too. Czechs are obviously more tolerant than the Hungarians towards homosexuals (etc.), perhaps even among the most tolerant nations in the world. But you need to separate that from the attitude to the homosexualist (a word of ex-president Klaus) activists who try to promote themselves and their orientation and brag about it. A safe majority of Czechs hates those, too. I think that in a referendum, Czechs would adopt this very law, too.

In those times, lots of things were not allowed (and it was even more restricted centuries ago, of course, the suppression of explicit sexuality didn't have much to do with communism). TVs were almost never showing nude people. This ban particularly applied before 10 pm because children may watch TV before 10 pm. And it was largely respected. The restrictions worked on the side of the kids, too. Kids were not supposed to talk about sexuality – they could have been spanked or otherwise punished if they did.

I tend to say that while we sometimes associate these restrictions with communism, there was a natural, strong support for similar restrictions from the society and this support obviously didn't go away and couldn't go away at the moment when the communists lost their total power. From this point of view, the ban on any sexual content served to kids is a totally sane, decent possibility. The capitalist freedom has obviously increased the concentration of similar content everywhere and it would be rather devastating for the culture if someone tried to enforce all these restrictions today.

But looking at the content involving the sexual orientations and practises that are considered deviations or that were considered deviations by majorities of nations just some decades ago, it is possible to enforce the ban for children and the added value is clearly much higher. Far left activists have been working for decades on their project to totally uproot and destroy the Western civilization. The worshiping of the patterns of behavior that are (or were) considered decadent or harmful to the society is a big part of their strategy. So indeed, if unprotected, the children are drowning in a toxic cesspool of entertainment that tells everybody to be transsexual or at least homosexual. And politicians in many countries that used to define the West have been openly promoting this decadence.

In a free society, everyone must have the freedom to have an opinion about which behavior is right and which behavior is not right. This is really an essential part of freedom – in fact, all freedom is about picking one of the choices and refusing other choices i.e. all freedom is about the freedom to discriminate between choices! These choices always have some links with particular people, groups of people, or their patterns of behavior. For this simple reason, the freedom to "discriminate" in the most general sense is really almost the same thing as freedom as a general concept. The canonical Western bills of rights etc. never banned "discrimination" because that would have meant a ban on freedom. The idea that the fight against "discrimination" in this most general sense is a European value is obviously one of the most fundamental lies that the malicious far left activists are trying to spread in the world – and in too many nations, these efforts are very successful.

As individual human beings, a majority of Hungarians obviously think that the homosexual and especially transsexual patterns of behavior, and especially their aggressive promotion (as "virtues"!) in the society, are something that should be refused, something that has the potential to harm the children and, as a consequence, the future of the whole nation. They don't want their children to grow into adults with a certain world view or behavior. And indeed, I think that most Hungarians don't want their children to resemble the far left activists or politicians we may see in the West because those are seen as bad examples – and the new society that these people are helping to establish in their nations is a decadent, decaying society.

Because Hungary is a democratic nation, these individual opinions of that majority of Hungarian citizens are also able to imprint themselves onto the collective opinions, judgements, and laws adopted by the lawmakers. This is exactly how things should be.

Some Hungarian commenters said that no Hungarian has ever sung a Hungarian song this nicely, as the Pilsen-born late Karel Gott. The music is a bit spicy, like a goulash (with some flavors that remind us of gypsies), but from most angles, this Hungarian folk music sounds exactly as Western or Central European as ours. Not bad for a language which is not even Indo-European and for a nation whose defining ancestors were nomadic just 1000+ years ago. Hungary has simply embraced the "new" place and values – much more than almost all "older settlers".

Many of the predictable, notorious far left international organizations have attacked Hungary because of this wise new law. And so did 17 heads of the governments of the EU member states. Sadly, Austria's Sebastian Kurz ultimately joined this absolutely disgusting club of bullies and liars, too. These bad people are lying about the content of the law and they are trying to delegitimize the self-evidently legitimate democratic government of Hungary or the whole Hungarian nation. Clearly, if someone focused just 1% of this attack on one of the nations or races that are privileged according to this distasteful and dishonest ideology (like the Nigerians, Afghani, Romani people, or Arabs), he would be under a severe attack as a Nazi. But for some reason, these filthy creatures think that it is always OK to sling mud and lies at Hungary (and a few others that are not lucky to be privileged according to this malign omnipresent ideology).

Hungarians and their political elites have the right to choose whom they consider role models and whom they consider deterrent examples. People doing marketing for the sexual deviations have always been considered the deterrent examples by a majority of Hungarian nation (and many other nations). But there are many other reasons to consider e.g. the 16+1 heads of the government to be extremely bad examples – and their letter which is a part of the anti-Hungarian terror is another one. Kurz and others, what you are doing is an absolutely disgusting bigotry and bullying that doesn't belong to the European soil. Hungary has the unquestionable right to defend its space from garbage like you (and your content) and I hope that in a foreseeable future, Hungary and Her allies will get enough power and resolve to defend the whole European space against this anti-European, anti-Western, anti-Christian, perverse, decadent, and dishonest garbage. Europeans by ancestry and especially values must and will retake the continent. 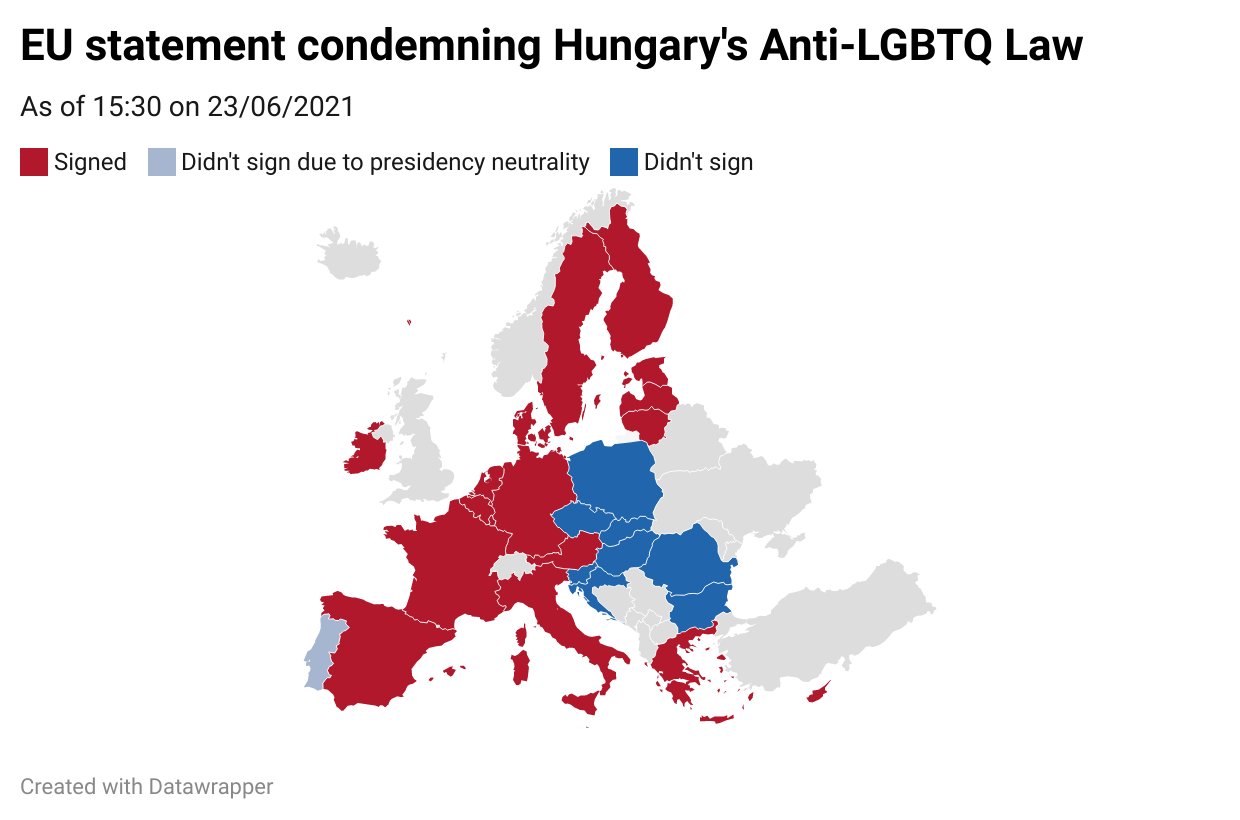 P.S.: The rainbow division goes almost precisely along the old Iron Curtain (with a resolved Tito-Stalin split LOL). The prime ministers who refused to sign the letter include those of: Bulgaria, Romania, Slovakia, Czechia, Poland, Slovenia, Croatia, Lithuania, and, of course, Hungary. (I don't see Latvia and Estonia in this list! Well, Latvia has always loved to parrot German policies. I am not motivated enough to investigate whether Lithuania has finally signed.)