Delta variant of Covid-19 strictly IS a common cold virus

Since the beginning of the Covid-19 era, there has been a battle on "whether it is right to compare Covid-19 to the flu". Of course it is. It is a totally analogous disease. Because Covid-19 was really new and the world population really lacked immunity, the virus could have spread to a much higher fraction of the world population and the case fatality rate was correspondingly higher because the individuals had no defense at all. So 0.05% of mankind has died (4 million) which is still a tiny fraction.

After a great majority of many nations have obtained (or are obtaining) either the natural immunity or the immunity from a vaccine, the virus is either destined to go extinct, or to mutate, establish some co-existence with the people who are (partly?) immune, and become a strict counterpart of the flu or the common cold that may regularly reappear.

Taken from the article: "The fun is over. The genuine men's little cold IS a serious problem, a physician claims." Note that the "little cold of the genuine men" (chlapská rýmička) is often used by Czech women to mock men who are never seriously sick but who complain about minor diseases. However, a 2017 Canadian research showed that (similarly to Covid-19) men are more likely to have complications out of these mundane diseases. Nature discriminates against the men again.

A few months ago, the Covid hysteria has mutated into a special form, the hysteria over Covid variants. Indeed, new variants have prolonged the disease and dying by two months or so (some variants were more contagious, others were partly circumventing the immunity created by older variants) but they haven't changed the big picture. What is happening now, especially in the U.K., is just amazing. And I don't mean any medical events, I mean the propaganda and policy events.

As the U.K. graphs show, it's been months since the U.K. reported the first day when ZERO people died from Covid. This is a truly remarkably low number because some 1600 Britons die from non-Covid causes every day in average. The square root of 1600 is 40 which is the normal "statistical deviation". You may say that 40 Covid deaths are "within the error margin". However, 0-1 is an even much lower number than 40.

But the new wave of hysteria and restrictions that can be seen in the British islands is just amazing. What is going on? 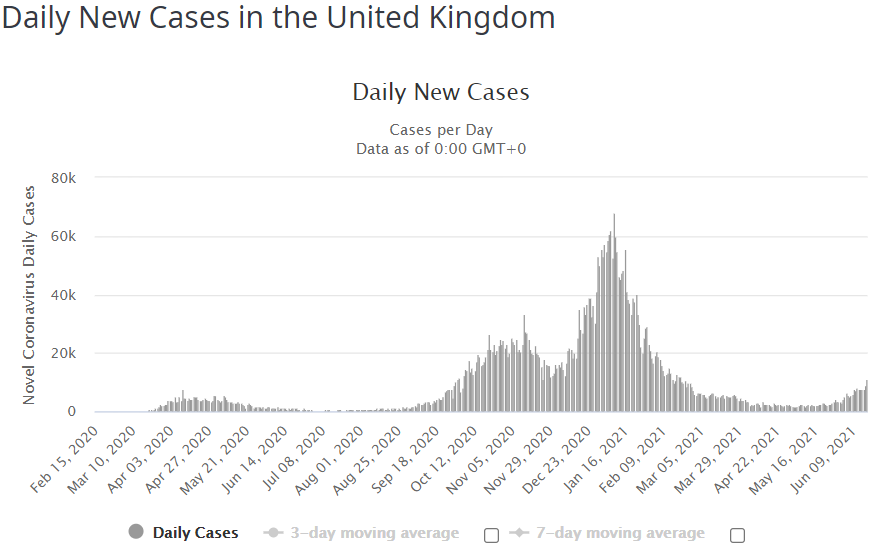 You may see the "terrifying" increase of the graph on the right side (the recent weeks). Since the local minimum about six weeks ago when the number of cases was often below 2,000 a day, the number has increased to some 10,000 a day. It's wonderful, the cataclysm is back, or is it? (The much smaller Czechia has had as many as 17,700 new cases a day).

The only problem with the happy screaming that "the Armageddon is back" is that there are no people dying. Just check the daily deaths graph and verify my statement that "there is no sign of a detectable deviation from oscillations near zero". 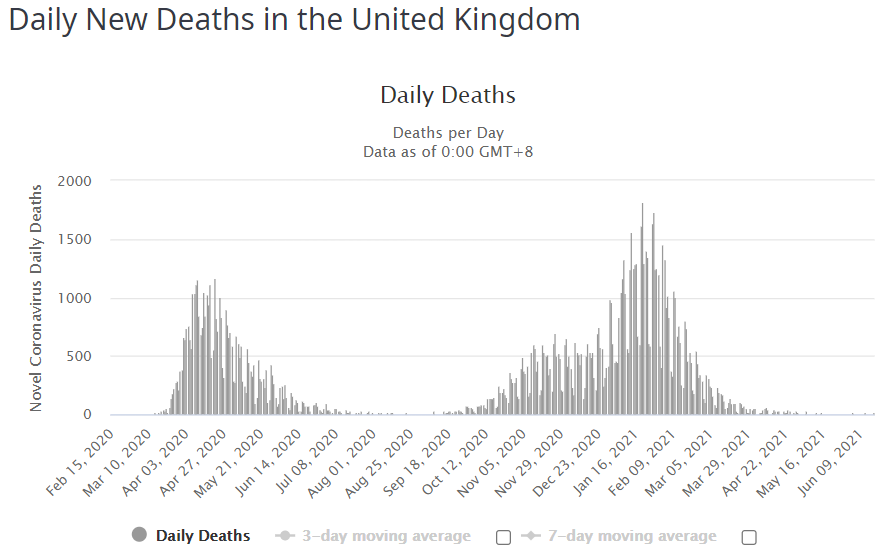 Why are the "cases" increasing but the daily deaths (and even hospital admissions) stay near zero? It's simple. You may trace the new revival of Covid to a new variant. They started to be labeled by Greek letters (because the more descriptive nation-based names are considered politically incorrect by the left-wing aßholes who control this whole propaganda) and the relevant one is the "delta variant" (yes, it used to be the Indian variant). A few weeks ago, the delta variant was responsible for 90% of new cases in the U.K.; that delta dude dominates the (right end of the) graph of cases. How does it differ from the previous variants? Well, the previous variants often killed people, didn't cause a runny nose, but could cause the loss of taste and smell. Instead, the delta variant doesn't cause the loss of smell and taste. But it does cause the runny nose, sore throat, and reactions similar to seasonal allergies.

Why is it so? It is because the delta variant is a common cold. The term influenza or the flu is a rather specific term that, strictly speaking, should only be applied to special viruses of a certain type, the influenza viruses, and coronaviruses simply cannot be influenza viruses, by definition, which is why "the Wuhan flu" is at most an informal, suggestive name of the disease, not a scientifically kosher name.

But the situation is different with the common cold. That term is defined in a rather general way, as a minor disease manifested by the usual symptoms, and it may be caused by many types of viruses.

Well over 200 virus strains are implicated in causing the common cold, with rhinoviruses, coronaviruses, adenoviruses and enteroviruses being the most common.

Before Covid-19, coronaviruses were known to cause some 18% of the cases of common cold. Now, the Armageddon-like Covid-19 delta variant is a mere mutation of the previous Covid-19 viruses that just passes the "Covid (PCR or antigen) test" but its effect is approximately the same as the effect of almost all coronaviruses before Covid-19: it causes a damn common cold. People blow their noses which makes the disease more contagious than all the previous variants of Covid-19 (including the already accelerated ones); but the runny nose also reduces the viral dose in the body (the infected fluids leave the body through the nose) and protects the lungs against a greater dose (and serious diseases only occur in the lungs). This description holds for all types of cold; the detailed genetics of the virus is irrelevant (even hay fever and allergies may lead to almost identical symptoms). Unlike the case of the "Covid influenza", it is absolutely scientifically kosher to include the delta variant among the viruses causing the common cold. This doesn't prevent the journalists from continuing the hysteria in the media; and the politicians from extending all kinds of insane restrictions.

The people have been brainwashed beyond any imagination. They already react to any news, any buzzword as if it were bad news or a sign of the coming cataclysm. They can't see the simple point that the delta variant is obviously good news: an optimistic scenario is being confirmed, Covid is turning into a common cold (a variant which may slightly beat the old immunity but is much less lethal), and the recurring delta-like common cold episodes will keep mankind immune towards hypothetical serious Covid variants, too. (Don't get me wrong, it's still possible that delta will eventually go extinct, too.) Also, the vaccination campaign in the U.K. has been so intense that almost all the old people have been vaccinated. Because of the previous frantic anti-Covid struggle, there are whole medium-size geographically defined pockets of young Britons where the natural immunity is almost zero. That guarantees that the drop of the Covid must have larger fluctuations and the increase linked to the recent delta-variant is one of these more or less unavoidable fluctuations. In Czechia, we get a super-smooth, monotonic, quasi-exponential decay simply because the population has been uniformly permeated by the virus (at the level of the ordinary people, Czechs reacted wisely and allowed the virus to spread rather smoothly and uniformly) and we may be almost certain that the delta variant couldn't cause a multi-month detectable increase of the new cases here.

But whatever happens with the fluctuation of the British cases, it's almost entirely the young people who are getting it, their symptoms are almost indistinguihable from other viruses that have been associated with the common cold for centuries, and (almost) no one is dying. So it is utterly insane to regulate the whole nation because of these "events" (which are actually complete non-events). The people on our side of the "wars about Coronazism" have always criticized the abuse of the (mass) testing whose main effect (and purpose?) was to spread the hysteria everywhere. The testing plays this devastating role even more obviously in the case of the delta variant because the "delta variant" is just another virus causing common cold which the unhinged, manipulated nation(s) treats as if it were the polio. Of course the hospitalizations rates are higher as well because people with this particular common cold are being stigmatized and uselessly hospitalized. But the graph of deaths makes all people with traces of common sense certain that the delta variant should be no reason for worries let alone draconian hysterical reactions at the national level because it is just like a common cold and indeed, it should be included to the common cold category.