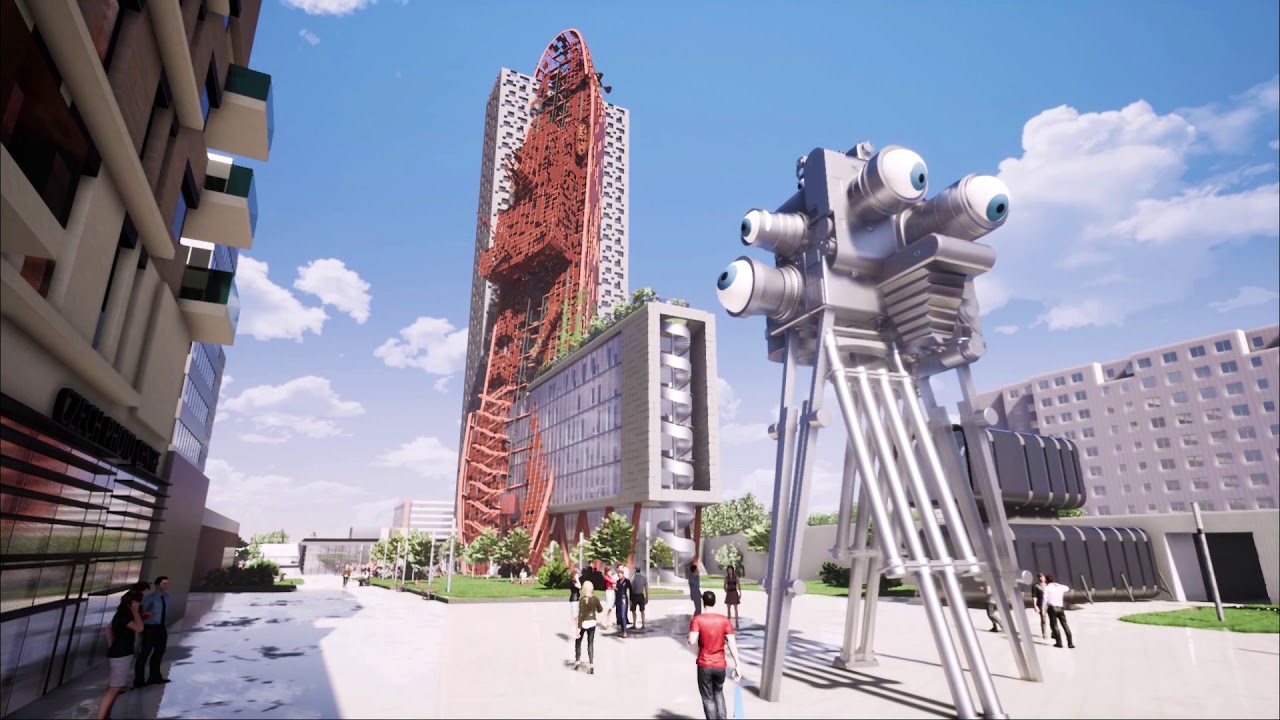 This unattractive Titanic-like building will become Czechia's tallest building (135 meters) and will be built just miles from the Prague Castle, in order to make us remember that the "architect" was impressed by the climate hysteria and willing to promote the lies about the climate.

Among the new hep-th papers that were released today, five mention a "string" in the abstract. I think that the following paper is the most interesting one:

It's a nice paper that could have been written during the Duality Revolution in string theory of the mid 1990s but it waited up to 2021. It is a six-or-seven-dimensional or \(G_2\) counterpart of the statement that the \(T^4/ \ZZ_2\) orbifold is a special case of a \(K3\) manifold; and that the \(K3\) manifold may degenerate into two "half-\(K3\)" manifolds that are connected by a three-toroidal throat (times a line interval with irregular ends).

These \(G_2\) compactifications of M-theory which degenerate into \(T^7 / \ZZ_2^3\) orbifolds have their dual (equivalent) heterotic \(E_8\times E_8\) descriptions. But in order to distinguish between the precise shapes of the seven-dimensional \(G_2\) geometry, you need to imprint some extra data to the heterotic string, you need some extra data which are naturally "non-geometric" because one dimension is being subtracted. And the non-geometric data are some data about bundles describing instantons at the orbifold singularities.

There isn't sufficient demand for me to write more about technical physics questions although I have needed over 15 years to fully appreciate that I have always been throwing pearls before swine – swine like you who may prefer mediocre anti-physics activists' lies over world class physics.

But what I found tragic is the analysis of the authors. They are

Of course, I know Acharya and Morrison very well. They are brilliant senior physicists of higher-dimensional supersymmetric compactifications. Bobby (who has also worked as an experimental particle physicist for ATLAS) is tied with the Kings College in London and with Trieste; Dave is in Santa Barbara. It is the third name that is new and junior. Great, he is a PhD student in Santa Barbara, I thought, a sign that a younger generation is capable of doing serious exciting science.

My excitement didn't last long. I found this web page:

Roughly at this time, Kinsella is getting his PhD under Morrison for "holonomy in geometry, analysis, and physics" and he will start a postdoc job in July 2021. So far so good. But keep on reading:

...In July 2021, I will start as a postdoctoral investigator working with Amala Mahadevan at Woods Hole Oceanographic Institution.

My work in oceanography is motivated by the question of how ocean circulation and turbulence affect Earth’s climate. I’m interested in the ways that geophysical fluid dynamics in the ocean and atmosphere determine distributions of heat and carbon via transport phenomena and biogeochemistry.

Holy cow, oceans, climate, and carbon? You can see that it's full of buzzwords that are convenient lies for the likes of Gr@tins Trautenberk. The new boss of Kinsela's, Ms Amala Mahadevan, has been at least a proper oceanographer and her papers were mostly about plankton. But how Kinsella describes his future "research", it is already a straight climate alarmist pseudoscience.

How may something as terrible as this thing happen? Was Kinsella unable to get a job in proper theoretical physics or geometry, something that he is clearly very good at? Was he blackmailed by the deformed job market in which governments – largely controlled by filthy and dishonest far left activists – favor pseudoscientific garbage over quality science? Or has Kinsella been truly brainwashed not to understand that what he is planning to do is a hardcore example of pseudointellectual prostitution? At any rate, I am utterly disgusted. This is an example showing how this whole generation has been turning and is still turning into a giant worthless cesspool.