The Science Magazine brought us some good news yesterday:

Someone in California is apparently still working on hot applied nuclear physics research (not just critical race theory). Unless we are completely lied to, I think that the super-optimistic headline is justified. 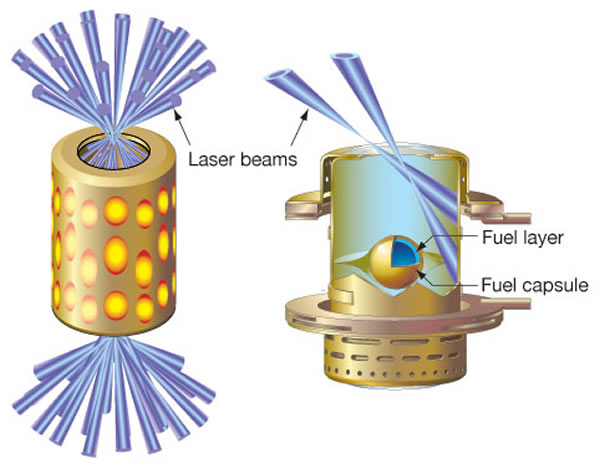 Nuclear fusion is the merger of light nuclei into heavier nuclei. This releases energy because iron has the deepest binding energy per mass among the nuclei (so you may produce useful energy by merging lighter-than-iron nuclei; or breaking heavier-than-iron nuclei, the latter is called fission). The simplest fusion process is\[ p + p + e^- \to {}^2_1D + \nu_e + 1.442\MeV \] We are given over one megaelectronvolt from two protons and an electron, about 1 million times more than what we're getting (\(1\eV\)) from a corresponding electron in "chemical" reactions such as the burning of King Coal (or the usage of lithium-based batteries, for that matter).

As you know, fusion processes are the key processes operating in the Sun (and other stars) and that's where almost all the useful energy on Earth ultimately comes from. The nuclear fusion that burns in the Sun heats the Earth, powers the photosynthesis, that creates fuels, food, and other useful things (photosynthesis is approximately the "opposite process" to the burning of fuels or digestion of meals; it creates the soybeans from the stuff that you create out of eating soybeans and the lycopods out of the vital gas, CO2, that you create by burning fossil fuels). It also causes some places of the Earth's surface to be warmer and that is why there are winds, hurricanes, tornadoes, weather, precipitation, and other useful weather processes that make Gr@ta and other gr@tins anxious.

The temperature inside the Sun is some 15 million Celsius (or Kelvin) degrees (the surface is just 6,000 kelvins or so). That is marginally enough for the kinetic energy of typical protons to push them close enough to other protons so that the fusion happens and some helium plus energy is created. However, at the temperature of just "a dozen" of megadegrees, the frequency of such reactions is very low. The Sun has been burning for 4.6 billion years and we expect over 7 billion extra years before the Sun goes red giant.

We want the bulk of the protons in our "fuel" to burn faster than ~10 billion years and that is why we need a higher temperature to push the protons closer, something like 100 or hundreds of millions of Celsius degrees. To be faster than our very slow Sun, we need to be (even) hotter.

As you might imagine, 100 million degrees is rather warm and it is hard to prepare such hot matter; and it is hard to store it. For example, a vessel made of the virgin coconut oil isn't good enough because that melts at 24 °C. You may find materials that remain solid at higher temperatures but 100 million is still rather far. OK, you can't really sustain ordinary ovens with the fuel for fusion. The fuel must either levitate – be kept inside a volume with the vacuum around it by magnetic and other forces, and this is mainly what the tokamak rings (Soviet know-how) want to achieve. Or you just prepare fuel that is burned once and there is nothing stable about it.

The National Ignition Facility in Livermore, California is arguably the leading non-tokamak solution. Some very powerful lasers are shining upon tiny fuel capsules. The picture above is an illustration; it is not necessarily the state-of-the-art fuel capsule. There are some light elements inside the pepper-seed-sized capsule, not necessarily just hydrogen. Lasers shine on it, they burn a part of the light nuclei, and that creates energy. I guess that you need to catch it in the spontaneous mess just like if something in the middle of your room burns and you want to use it for heating.

Last week, they created 1.35 MJ of energy which is equal to 0.375 kWh, to use a unit that we know from the utility bills (and that is easy to deal with if you think about devices whose consumption is X watts). That absolute amount of energy has increased the record by a factor of eight which is nice. Even more importantly, the fraction of the invested energy has gone up.

Those 1.35 MJ they got was a promising 70% of the total energy that was spent to irradiate the fuel capsule. This is clearly close to 100% and the fact that it is smaller than 100% is a complete coincidence because we are comparing (and dividing) two bunches of energy that have almost nothing to do with each other (the capsule stores much more nuclear energy that could be used if it were fusion-burned perfectly). The real fun is that the percentage used to be about 3% for many years, even very recently, and they increased it to 70%. If the increase from 3% to 70% was doable, I find it rather obvious that the increase above 100% is a matter of time and it could be a very short time (less than a year). It is actually my guess that within two years, the NIF will announce the same result with a fraction higher than 100%. There is nothing special (from the viewpoint of the construction: what you needed to prepare to do this well) about the number 100% here. Of course, from the viewpoint of the usefulness of the experiment (what does the achievement imply), the number 100% is the most important threshold.

I have almost no idea about the practical questions, how the fuel capsules are produced, how expensive the production is, whether it can be scaled, how many things get destroyed when the lasers heat up the fuel capsule, how you catch the energy to connect some turbines (I think that it would ultimately power turbines just like coal and fission power plants) and many other things. At the totally fundamental level, I see no universal theoretical restrictions that would irrevokably stop this strategy to create energy in a new way. The picture of our future based on this possibly emerging technology is obvious: a family needs a dozen of pepper seeds per day to satisfy its (today's) energy needs. Clearly, the family would spend much more electricity if it were much cheaper.

Indeed, the electricity prices could drop hugely if this solution could be scaled and all the refreshment of the devices would become straightforward. I suppose that the lithium (and similar) batteries would also seem obsolete in a world with the super-abundant electricity. While the wireless transfer of energy may have some losses, it would make sense to make it omnipresent for electric cars to run.

Note that there are other competitors aside from the NIF lasers and tokamaks. Tri Alpha Energy claims to have had an energy-positive result and wants to sell fusion reactors in 2030. Thanks to Buck Smith for this remark.